As a major arcana card in the Rider-Waite-Smith Tarot and other decks based on the Latin Tarot (also known as the Tarot de Marseilles), The Sun offers you specific information of importance when it appears in a tarot spread. Along with the symbols on its face and its numerology, its position in a reading provides clues to its meaning during a reading.

Just looking at The Sun tarot card can leave you feeling upbeat and happy. If you've ever experienced a brilliant sunny day after a period of dark or damp weather, then looking at The Sun will perfectly capture the feeling that arises on the first brilliant, sunny day after a long, dark winter. It is filled with symbols of joy and triumph. The image shows a naked child sitting astride a white horse. In the background, the sun blazes in a bright blue sky behind a field of sunflowers in full bloom. A wall holds the sunflowers in place and a red flag waves triumphantly.

Placement in the Major Arcana

Major arcana cards were originally trump cards when tarot decks were used as a game, and their differentiation from suit cards carried forward into the tarot's use as an oracle. When major arcana cards appear in a tarot spread, they indicate information of special significance to the querent. The cards of the major arcana depict archetypal energies present during a soul's journey from innocence (The Fool) through the realms of materialism, intellectualism, and spiritual awakening to enlightenment. The Sun appears as the third in a series of celestial cards (following The Star and The Moon) that show advancement into spiritual realms after a dark night of the soul as depicted in the tarot's most tumultuous cards including The Devil, Death, and The Tower.

Along with symbols, the numbers on tarot cards also have special significance based in numerology. The Sun is the 20th card in the major arcana but is numbered 19 (XIX) because the major arcana of the Latin Tarot starts with 0 - The Fool. Numerology considers the number 19 both in its raw form (as 19) and by adding the digits together to reduce it to a single digit, so in this case it would be 1 (1+9=10, 1+0=1). The number 19 is a higher expression of the energy of 1, which is the primal or base energy of the universe. It is the first step in a cycle after the completion of the previous cycle. Therefore, 19 reflects the primordial energy of the universe and creation, but it depicts a higher or more enlightened expression of that number than its predecessors, 1 and 10, which are depicted in the major arcana cards The Magician (1 or I) and Wheel of Fortune (10 or X). Therefore, while all of these major arcana cards represent creativity at the start of a new cycle, The Magician deals with the physical realm, Wheel of Fortune represents the mental realm, and The Sun depicts the spiritual realm, offering the raw materials in the cycle of the soul that leads ultimately to enlightenment.

Nude Child on a Horse

While in Western culture nudity often symbolizes shame, vulnerability, or embarrassment, on this card it is significant that the one who is nude is a child. Until they are conditioned by society, children view nudity differently than adults. They do so without shame or embarrassment, but with openness and freedom, and that is what the nude child on The Sun depicts. It is an expression of freedom from fear, and the act is carried out in full daylight under a blazing, bright sun.

Of course, you can't discuss The Sun without discussing its major symbol for which it is named, the Sun itself. The sun is a symbol of light, and on this card it is the brilliant, blazing light that often comes after a period of darkness; think the first brilliant day of spring after a particularly dark and dreary winter. Here, it also represents breakthrough and the dawning of the new, which shimmers with possibility. 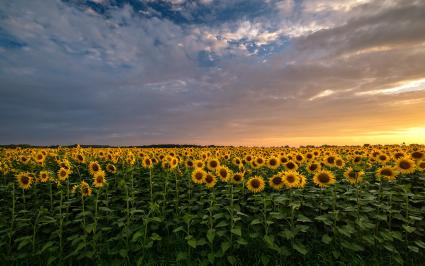 Sunflowers are an earthly representation of the sun. Not only do they grow tall and vivid from the sun's light, but they also require other elements such as rain, cool air, darkness, and dormancy to grow to their full height and beauty. Therefore, while they are a reflection of the sun's light because they mimic the sun's appearance in their full and glorious form, sunflowers also must go through darker, stiller periods and be nourished by elements other than the sun to reach that potential. They also contain the seeds within them of the next cycle; they do not remain in full flower forever, but rather eventually spread their seeds and wilt as the cycle begins anew. Therefore, the sunflowers on this major arcana card depict the fulfillment of the cycle of darkness moving into light and also show the seeds for the next cycle are present, which is a cycle that plays out endlessly in every aspect of life ranging from microorganisms all the way up to the human soul.

The wall holding the sunflower back reminds you that, while you are moving into a new, creative cycle, it is still retained within you, the human container. However, with effort, all walls can be broken down, so while there is still containment, the unlimited potential remains within the cycle.

The flag is a triumphant symbol of change and the banner of willingness to move boldly into new energy.

Meaning of The Sun in a Tarot Reading

All the symbols together suggest the dawning of a new cycle of energy within the journey of the soul. It shows you have emerged triumphantly from periods of dormancy or darkness and are now forging ahead with new tools and renewed determination. It may suggest new growth or prosperity in any number of areas of your life, from health and money to accelerated spiritual growth.

When reversed, The Sun might indicate upcoming roadblocks or obstacles to overcome along your path, or it may suggest you have taken a step backwards in your advancement or your expectations are unrealistic at the moment.

In general, The Sun is a highly fortuitous card. It shows you now have the materials for a new cycle of creation as you grow and change on your soul's journey and reminds you of how far you've come.