The Hierophant (pronounced HIRE-oh-fent) tarot card appears in the major arcana in tarot decks based on the Latin Tarot (Tarot de Marseilles) such as the Rider-Waite-Smith deck. As with all other cards in traditional tarot decks, the images depicted on the Hierophant are rich with symbolism that suggests the meaning when it appears in a tarot spread.

Meanings of Upright Hierophant Card in a Tarot Reading

The Hierophant card in a reading may have any of the following meetings:

Meanings When the Hierophant Is Reversed in a Spread

When the Hierophant is reversed (upside down) in a reading, it may mean any of the following. 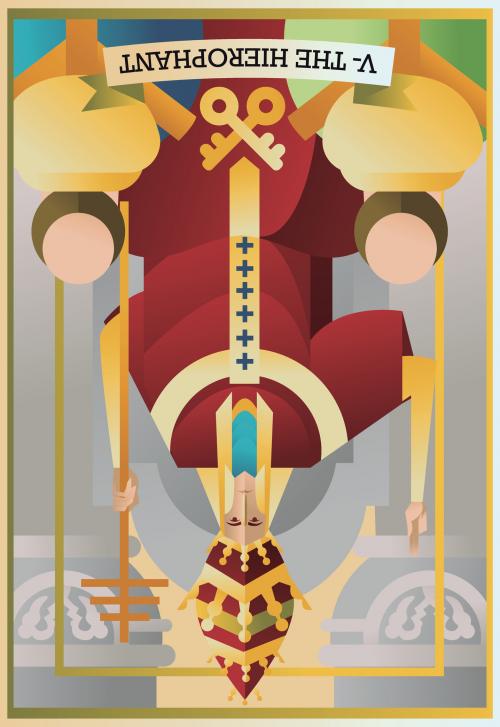 Symbolism Found on the Hierophant Card

The Hierophant sits on a throne in a temple between two identical pillars set against a stark white background. He wears a three-tiered, golden papal crown and red robes adorned with crosses. His right hand is held in a papal blessing with two fingers extended and two hidden. In his left hand, he holds a golden three-tiered staff terminating in the papal cross.

In numerology, the number 5 is a number of change and growth. It shows a balance of yin and yang (or feminine and masculine) with a slight edge towards yin (feminine). Five often depicts the embarking on an adventure, moving in a new direction. As it relates to the Hierophant's position in the major arcana, it can be seen as a time in which the spiritual adventure the soul is about to begin.

Hierophant's Position in the Major Arcana 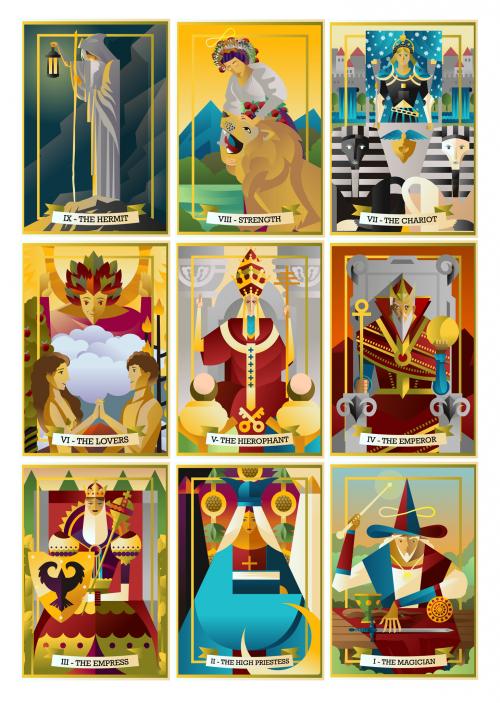 The major arcana depicts a soul's journey, and the Hierophant is the major card in which the soul begins to cross from physical, earthly concerns to those of soul and spirit. When he appears in a spread, his position in the major arcana suggests the querent is moving into a period of spiritual expansion.

In other decks, the Hierophant is sometimes known as the Pope or the High Priest. He is a figure of religious authority, and the card depicts many Christian symbols to show this. His papal crown signifies the Christian Trinity, as does his three-tiered cross.

The blessing held in his right hand suggests the spiritual knowledge he shares is partially hidden and partially readily available to anyone (two fingers are hidden and two are extended). The religious supplicants are receiving his blessing. The crossed keys represent the keys to the gates of heaven Jesus presented Saint Peter (Matthew 16:19).

The colors red and white repeat throughout the card: in the flowers on the supplicants' shirts, in the carpet, in the wall color, and in the Hierophant's robes. Red represents love while white represents purity. The red robe is also a symbol of loving authority; it is a common symbol in many of the major arcana cards including the Magician and the Emperor.

Understanding the Upright Hierophant in a Reading

All of these symbols offer clues about what the Hierophant means when he appears in a reading. In readings, the Hierophant suggests a significant time of expansion in spiritual matters. He may also suggest spiritual expansion in various aspects of your life, such as expanding prosperity, a stronger and more loving relationship, or movement into a more spiritually focused career. He may also be suggesting it is time to seek wise spiritual council in order to move forward positively.

When he's reversed in a reading, the Hierophant foretells of inauspicious leadership. It may suggest the ego is overcoming more spiritual aspects of yourself and blocking your personal growth. Alternatively, it could imply you are seeking and following teaching from someone who provides unwise, inauthentic, or even false council.

The Hierophant Points to Spiritual Expansion

Although the symbolism on the Hierophant is frankly religious, it's important to understand this card does not point to any specific religion or theology. Rather, it uses religious symbolism to point to expansion into more spiritually guided realms, regardless of your personal religion or belief system.