Once you see the lotus tarot deck, it will speak for itself. You'll recognize it as being linked to the Rider-Waite. Yes, it's a 21st Century, hipper rendition of a classic. Its cards are photoshopped real-life images instead of artist drawings. Like Rider-Waite, it's a working tarot deck, but people are also purchasing it for its beauty and because it speaks their language.

You may know Lotus Tarot as a website that offers free online Tarot readings, live chats, and phone readings. Allison Day, the creator of the site, had always wanted it to have a tarot deck of its own, and three years ago, Angie, the site's resident graphic design artist and talented photoshopper, took on the project.

Angie created a uniquely different deck that is a historically accurate, authentic esoteric deck that uses compilations of real-world images. Initially, the deck was used as digital images for online readings and articles, but there were so many requests for a physical deck that the digital images used online were translated to print, and it became available for purchase. In December 2017, Lotus Tarot introduced its own modern design tarot deck. You can see an image of each card at the LT Deck website.

Using the Cards of the Lotus Tarot

The LT deck is based on the Rider-Waite deck, with a few tweaks made to the Major Arcana that echo Paul Foster Case's B.O.T.A. tarot. 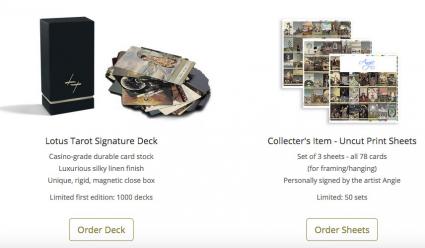 Choice of tarot decks is very much a subjective personal preference for most readers. However, The Rider-Waite Deck is so well known and firmly established that most readers won't have to relearn the associations and symbology, which makes it an easy transition.

It's a practical and usable deck that can be used anywhere tarot is appropriate.

Differences Found in the Lotus Tarot

Other than the cards being photoshopped real-life images that reimagine the traditional Rider-Waite Deck, there were a few tweaks made in the Major Arcana which echo the BODA Deck.

The cards of the deck are made using casino grade card stock with a very sensual linen finish that allows them to shuffle and spread easily. Not only are they made to last longer than standard print cards, but they are also more pleasurable to handle.

The "Lotus Tarot Signature Deck" is a limited first edition of 1,000 decks that come packaged a beautiful and unique, magnetic close rigid box. They are priced at $99 are only available on the LT Deck website. To purchase the deck, you'll have to sign-up and sign-in on the website, but it's completely free to sign-up. This is a unique 21st Century deck, and its limited availability may one day make it a collector's item.

Bonding With Your New Deck

Every tarot deck has a unique personality and developing a working relationship with your new deck can take a bit of time. Most tarot readers clear and charge their new deck. When these beautiful cards arrive, hold the deck in your hands and get a sense of its unique energy and vibe. Work through the all 78 cards one by one and several times. Notice the feel and what jumps out at you. Do any cards seem especially relevant to you? Is there a character that speaks to you? Take time to get to know the cards and enjoy this very hip version of a classic.