It's generally believed that the standard deck of playing cards, used for everything from three-card monte to high-stakes poker, evolved from the Tarot. The similarities between a Tarot deck and a deck of playing cards are significant, yet few seem to consider using their pinochle deck to tell the future.

Playing Cards and the Tarot Deck

A Tarot deck has 22 Major Arcana, four suits with ten "pip," or numbered cards in each. Each Tarot suit has four "court" cards, King, Queen, Knight, and Page, for a total of 78 cards. The Major Arcana and the Knights have disappeared from playing cards, and the Page became the Jack. A deck of playing cards contains 52 cards, forty numbered cards, and 12 face cards. Additionally, a deck includes two, or sometimes four, Jokers.

The Four Suits of Playing Cards

A deck of playing cards has four suits, Hearts, Diamonds, Clubs, and Spades. Each suit has a general meaning. 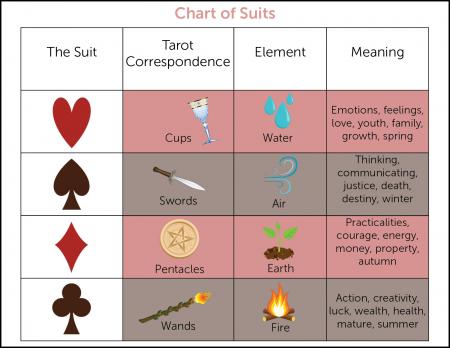 The Suit of Hearts

Hearts correspond to the Cups in Tarot and pertain to emotions, love, family, friendship, and matters of the heart. However, if Hearts are dominating a reading, it can also signify an overly self-indulgent person, which can lead to the loss of love.

The Suit of Diamonds

Diamonds correspond to the Pentacles, Coins, Cups, or Disk in the Tarot. They pertain to financial or money matters and are usually favorable. However, if Diamonds dominate a spread, it could signify a person who is overly focused on financial gain, or is materialistic and greedy.

The Suit of Clubs

Clubs correspond to the Wands in the Tarot, they pertain to intellectual endeavors and success in projects or undertakings. Clubs are usually good omens. If Clubs dominate a reading, it can indicate a significant future opportunity or possibly someone who's overworked or puts their career ahead of anyone or anything.

The Suit of Spades

Spades correspond to the Swords in the Tarot. They can indicate anxiety, financial loss, love without respect, loss or separation from friends and family, as well as sickness and even death. If Spades dominate a reading, it is an indication of trouble ahead.

The Face Cards of a Playing Deck

The Jack, Queen, and King, combined with their suit, can be read in several ways. They can be interpreted as people, as personalities, as situations, and more. They can represent an aspect of the seeker or someone within their life. They can provide clues as to how a person thinks, feels and acts, and what truly motivates them. However, they can also symbolize qualities to develop, spiritual guides, and even events and situations coming into existence. You'll have to work out which applies in the context of each particular reading. 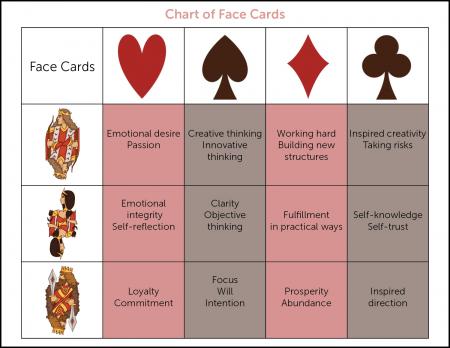 The numbered cards also combine with the suit to answer your question or give you advice. 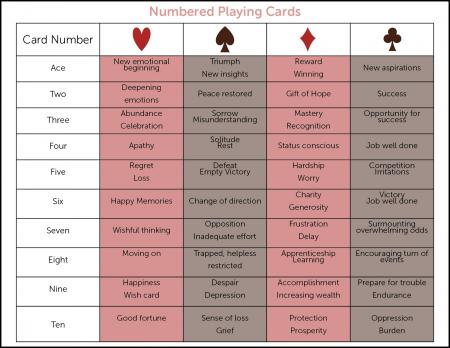 The Joker is a card that may or may not be used in a reading because it represents the unforeseen variables in life. However, if you decide to use it, the Joker indicates chaos, the unexpected, and unpredictable. 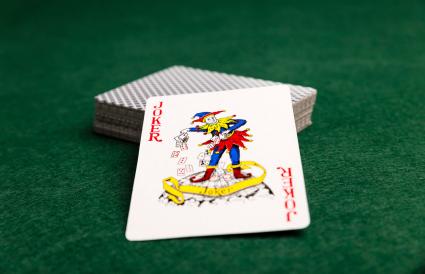 Once you understand the meaning of each playing card, you can use the same spreads used by Tarot card readers. Tarot readers often have favorite spend or use the spread that will best answer the question. An excellent way to begin is with these simple spreads.

Practice makes perfect, and over time and with experience, your intuition will grow. But in the beginning, you must learn and understand the nuances of meaning for each card in different placements related to various topics. Then you must learn to synthesize the cards because the real art of card reading is when you can take all the cards, in all their positions, thread them together, and tell a story that relates to the question.