Numerology is a form of divination similar to astrology that deals with connections between numbers and personality traits, destiny, events, and circumstances. Certain numbers associated with people, places, and events may play a role in better understanding these things or predicting potential outcomes. Your personal numerology is part of the karmic imprint you bring to this lifetime in order to help you grow spiritually.

At the root of numerology lies the belief that numbers are a universal language. By calculating certain numbers (typically birth names and birthdates are the primary numbers calculated), one may get a clearer picture of themselves, others, and the world at large. While this system appears to have been used across various civilizations for thousands of years, nobody really knows the true origins of the study, although numerological systems and beliefs appear in writings discovered from early cultures.

Gematria is an ancient form of numerology arising from Jewish mysticism and scripture interpretation where each Hebrew letter was also assigned a numerical value, and the value of words were calculated using these numbers. Using this equivalence between numbers and letters, scholars calculate the value of words in the scriptures to draw parallels between certain passages and develop connections between important concepts.

Western numerology can be traced back to Greek philosopher and mathematician Pythagoras, who developed a theory of numbers. As in Gematria, Pythagoras posited numbers offered a system for understanding the universe, and he assigned each letter of the alphabet a numeric value. This is the most common form of numerology practiced today, and the number/letter values are based on a table of 9 numerical values. 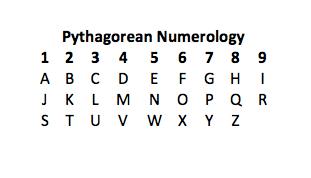 In a Pythagorean numerology chart, you'll most commonly see the following calculations: 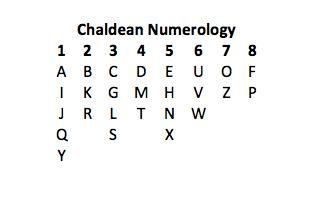 Also like Pythagorean numerology, the two main values calculated are the name and the date of birth.

As a hybrid of Gematria and Pythagorean numerology, Kabbalah numerology uses the name to calculate personality traits with the same letter values but with different meanings for each single digit number. Kabbalah also has more than 400 life path combinations, so there are more variables.

To calculate a Kabbalah number for Robert Amos Smith:

This is a very basic primer on the different types of numerology, and much more in-depth study is required to truly understand each. While you can do some basic calculations, you may wish to seek more information from a qualified numerologist.

Life by the Numbers

Based on the system used and the meanings associated with each of the calculated numbers, you can learn personality traits, obstacles that need to be overcome, and other karmic attributes that may come into play throughout one's life. Like astrology, numerology provides a blueprint that can be quite accurate. However, there are many other aspects to individuals along with their numerology, including the choices they make throughout their life. So, while numerology may help you better understand your personality and possible challenges, free choice always plays a role as well, and it's up to you whether you choose to follow the path laid out by numerology or forge your own in spite of it.