If you have a Scorpio stellium, you have a gang of planets working together that are all emotionally intense, suspicious, fascinated with death, danger, the unseen, the psychospiritual and anything that temps you away from a peaceful, simple life. There's nothing lighthearted or superficial about an individual with a Scorpio stellium.

A stellium is three or more planets that are conjunct in one astrological sign. If your have a Scorpio stellium you will have some exaggerated Scorpio traits. Scorpio is astrology's Fixed water sign. Water symbolizes emotions, and fixed water can get swamped with emotions. This means emotionality will be even more pronounced with a Scorpio stellium. These are individuals who tend to live life on the edge of one emotional extreme or another and can survive the direst of circumstances and come out transformed.

With so many planets in Scorpio, those with a Scorpio stellium tend to be:

Having so much Scorpio energy also comes with exaggerated Scorpio problems. An individual with a Scorpio stellium is prone to:

Planets in a Scorpio Stellium

In The Stellium Handbook, astrologer Donna Cunningham writes the "sequence of planets in the stellium... tells the story." Which means the planet at the lowest degree of Scorpio is the lead planet and sets the stage for the rest to follow. Imagine team Scorpio in a football huddle, with the lead planet playing quarterback. Every member of the team (planet) has a position to play, but the quarterback calls the plays.

The Pluto in Scorpio Generation

If you have a Scorpio stellium and were born between 1983 and 1995, you're a member of the Pluto in Scorpio generation and chances are your stellium includes Pluto, the ruler of Scorpio. This almost doubles the power and strength of a Scorpio stellium. Why? Because Pluto represents huge transformative (life and death) issues that the collective was dealing with when you were born.

The House of your Scorpio Stellium

The Scorpio stellium's house position is significant since it shows the areas of life where you focus your passion and intense emotional and transformational energy.

Katy Perry could be the poster child for Scorpio stelliums. Born on October 25, 1984, at 7:58 AM in Santa Barbara, California. Katy's stellium strings across her Ascendant, bringing her 12th and 1st houses together. It contains: 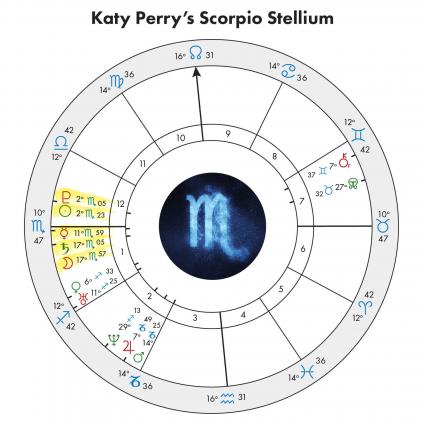 Katy Perry Is a Survivor

Katy Perry was born with the planets in an arrangement that's well-suited for someone with the power and determination to pursue her dreams (Scorpio Sun conjunct Pluto in the 12th house). It indicates a singular focus to master her own destiny and cultivate her own identity (Scorpio stellium conjunct the Ascendant). Pluto in Scorpio is the lead planet of Katy's stellium. Scorpio Sun/Pluto in the 12th house speaks of her obsessive instinct to survive, transform, and maintain her superstar status (Katy's Sun rules her Leo MC). Katy's Scorpio stellium is delineated in the lyrics she wrote and the music she composed for Roar and Rise, her two survival anthems.

Hallmarks of a Scorpio Stellium

0
Comments
© 2006-2021 LoveToKnow, Corp., except where otherwise noted. All Rights Reserved.
Resources, Advice & Tips for Covid-19
Read More
What Is a Scorpio Stellium? Meaning and Influence