Do you feel driven by some mystical force that seems beyond your control? Do you feel as if you have a vast reservoir of talent that is just out of your reach? Are you chronically distressed due to the feeling that you have a "special" calling in life and are unable to figure out exactly what that is? If so, you may be experiencing the power of a yod in your natal chart.

A Yod: The Finger of God

The word "yod" is the name of the tenth letter in the Hebrew alphabet and is said to be the essence of life and the power of the spirit to govern and guide matters of the material world. It's also a Hebrew word that means "hand." An astrological yod is often referred to as "the Finger of God" and has gained fame as neurotic configuration.

A yod is an isosceles triangle that's formed when two planets are in a sextile (60° aspect) and both simultaneously create a close inconjunct or quincunx (150° aspect) to a third planet (2° to 2.5° maximum orb). The third planet is the apex planet. 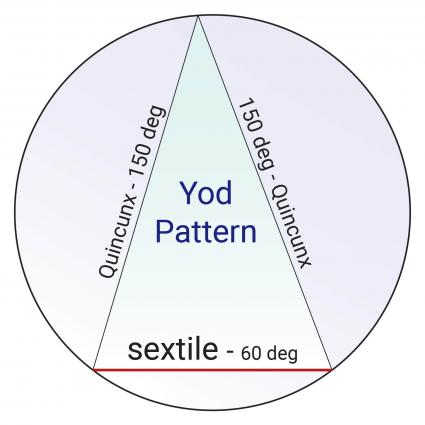 The Base of the Yod

The two planets that form the base of the triangle are in a harmonious sextile aspect. Which means they are in signs that have complementary elements, either fire and air or earth and water. The third planet, the apex planet, has nothing in common with the other two, either by element or modality.

The Finger of the Yod

The pointing finger of the yod is created by the two quincunxes. Planets that are in a quincunx aspect speak a different language and this disconnect causes a person to feel itchy, inadequate, clumsy, and conflicted. A yod's two quincunxes create an inescapable situation between the planets. You could think of the apex planet as a stranger trapped in a foreign land. The foreigners could be friendly to or could gang up on the stranger, but in either case, the "stranger" will always be struggling to understand what the foreigners are saying.

A Yod in a Natal Chart

It's thought that those who have a yod in their natal chart have a powerful mystical force working in their lives. And this force compels them to fulfill a particular but unknown purpose. There's a sense of urgency, they can become neurotic and totally directed toward that goal. Yods are not fun. A yod is pointing out a problem, issue, or conundrum in your life.

As with all closed configurations in a horoscope, a yod needs activation. A yod's activation point is the mid-point between the planets in the sextile aspect. As an example, say your Sun at 15° Gemini is sextile Saturn at 15° Aries, and both are quincunx the Moon at 15° Scorpio. This yod's activation point would be the exact middle between the Gemini Sun and Saturn in Aries, or 15° Taurus. This sign and degree are considered the spot that adds an essential element that's missing and is integral for connecting the apex planet to its supporting base.

Progressions and Transits Activate a Yod

When a progressed planet or transiting Pluto, Neptune, Uranus, Saturn or Jupiter conjoins a yod's activation point, its energy is turned on. There are many different ways an individual can respond, but a feeling of loss, despair, depression, and hopeless are common. What's actually happening is that the person is compelled to grow and integrate lots of lessons without realizing it. Once the yod is initially activated, it will periodically be activated over and over by a conjunction of a slow-moving planet to any of the yod's 3 founding planets. Each transit will actualize the yod and give the individual new challenges to overcome.

Ted Turner has Mars (♂︎), the planet of action and energy, in Libra and in his 10th house (career) making a sextile to Mercury (☿), the planet of communications in futuristic Sagittarius conjunct his Ascendant. Mercury and Mars are shooting quincunxes to his Uranus (♅), the planet of genius, originality and independence and North Node (☊) in the stable earth sign of Taurus in the 5th house. The artistic qualities of Taurus on the cusp of the fifth house along with the North Node and Uranus in Taurus made him a creative genius who was destined to do something both practical and revolutionary. 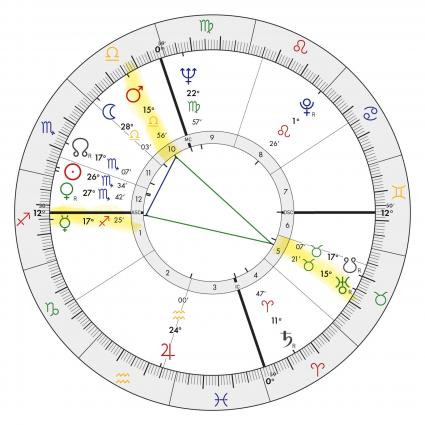 Ted Turner, often referred to as the "mouth of the South," was an eccentric and unpredictable man who had goals others in the 1970s thought to be a bit over the top. He was the first to put a local TV station (Atlanta's WTBS) on Satellite, where it was broadcast nationwide through a network of local cable television operators. Turner also started the Cable News Network (CNN) which broadcast live news events. Ted Turner revolutionized the television industry, as well as the way the news was broadcast. And he did all of this despite (or perhaps due to) living with bi-polar disorder.

The orbs of influence must be almost exact to create a yod, no more than 2° for the quincunxes. Therefore, it's rare to have multiple yods in a natal chart. Even then, one or two of the same planets are likely to be involved. These shared planets tie the yods together. Multiple yods can be imagined as a tag team wrestling match going on inside the individual, in which the various players take turns and relentlessly goad the person on. Although rare, the musical genius Prince has multiple yods in his birth chart. 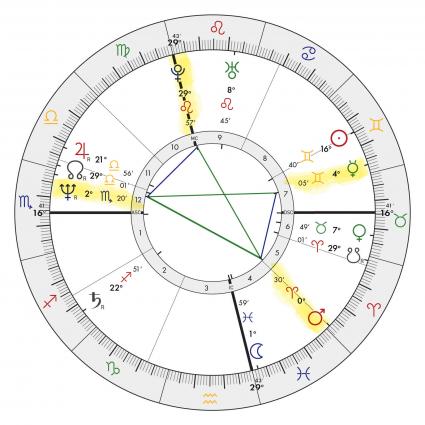 The shared planets in Prince's natal chart are Neptune, which is in the 12th house and Mars which is conjunct the 5th house cusp. Mars in Aries in the 5th bestowed Prince with vitality, courage, and a natural creative flair. While Neptune in Scorpio in the 12th gifted him with the ability to mystify, bewitch, enchant and inspire with his musical talents.

A golden yod is related to the yod but is more harmonious. A golden yod occurs when one planet forms biquintiles (144° aspects) to two others that are separated by a quintile (72° aspect). The quintile divides the 360° circle by five, creating a Venus pentagram, which is said to be a type of astrological magic and good luck charm. However, an inverted pentagram is often associated with Satan and black magic. 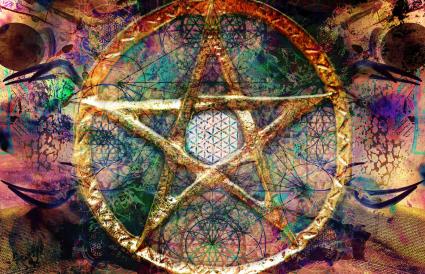 A Golden Yod Is Beneficial

Quintiles and bi-quintiles bestow incredible strengths and powers that push the individual to succeed in whatever they are here on this earth to accomplish. Some astrologers regard a Golden Yod as an incredibly creative configuration, due to its affiliation with the planet Venus and believe it indicates artistic talent. Most astrologers see the quintile and bi-quintile as beneficial and therefore see a Golden Yod as beneficial.

An alternate take is a negative potential that's found in the charts of many noteworthy individuals. Yods, of every type, represent extraordinary powers available for good or ill, as well as a life in which people and circumstances continually push the person toward the completion of their "fated" task. However, it's mostly how an individual uses the energy and whether the planets forming the crucial aspects are in any way harmonious that matters. 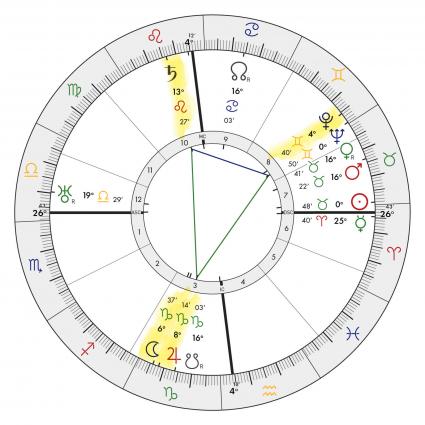 Hitler, a failed artist, wrote in Mein Kampf, "…every great movement on this earth owes its growth to great orators…" and Hitler focused and expressed his zeal for leadership ((♄ ♌︎ 10th) and his imaginative (♆) transformative (♇) intellect (♊︎) through his 3rd house Moon/Jupiter. The 3rd house is the house of logical, linear thinking. With Moon/Jupiter in Capricorn and in the 3rd house, Hitler was gifted with the ability to be a confident and persuasive orator or writer, but one whose reason was clouded by his emotions (Moon) and ambitions (Capricorn).

Yods by Transit and Progression

You don't have to have a yod in your natal chart to experience the energy of a yod. If you have a natal sextile, a yod can be formed when a transiting or progressed planet moves into the apex planet position. This creates a temporary yod. Outer planets and progressed planets will form long-lasting yods. Inner planets will only stay there for a short time and quickly move on. These connections are times when the house the planets are moving through gets some negative attention.

A yod can also be formed in synastry. If a person with a sextile in their birth chart meets someone who has a planet in their birth chart that sits opposite the midpoint of that sextile or vice versa, a yod is created. This yod will be activated whenever the two individuals are together. This is likely to be a relationship to remember but one you'd rather forget.

How to Find Out if You Have a Yod

The easiest way is to create a free chart is at Astro.com, but you'll need to know the aspect symbols and what lines to look for. However, due to the need for tight orbs, finding a true Yod can be challenging for a beginner. The best way to know if you have a yod in your natal chart and what it could mean is to visit a professional astrologer who pays attention to "minor aspects" and has an understanding of yods.

The very best book on yods is Karan Hamaker-Zondag's The Yod Book. This book covers ways to work around the negatives of a yod, highlights some positive things a yod can provide, and also covers yods in synastry and transits. It's probably best to have a fundamental understanding of astrology before reading this book. However, it could be descriptive enough that even as a beginner you'd be able to follow most of it.

Individuals with yods always sense they have a destiny to fulfill. It's almost as if before birth they made a vow that they would do this even if it killed them. Of course, it won't kill them, but it will become an obsession, as well as an issue they will have to deal with until its resolved. Only then will they discover the magnificent gift a yod was meant to be.

0
Comments
© 2006-2020 LoveToKnow, Corp., except where otherwise noted. All Rights Reserved.
Resources, Advice & Tips for Covid-19
Read More
What Does a Yod Mean in Your Natal Chart?