What Is Retrograde Motion?

Retrograde motion is an illusory side-effect of the planet's speed and its proximity to Earth. When a planet is at its closest approach to Earth, it appears to be moving backward. It's sort of like the Earth is demanding the planet to back off and rethink what it's doing. The length of each planet's Rx cycle is different. The fewer times a planet turns retrograde, the more significant the retrograde planet is in your birth chart. 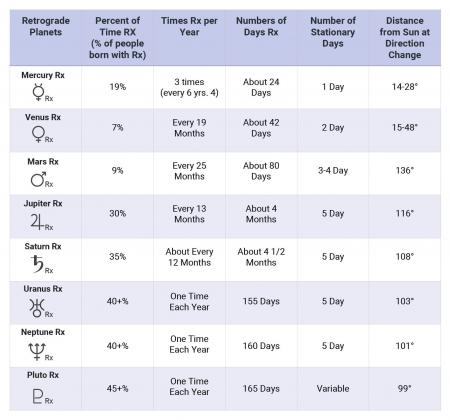 Finding the Retrograde Planets in Your Natal Chart

You can find the retrograde planets in your natal chart by looking for a small R or Rx after the planet glyph. If you don't have your birth chart, you can get it at Astroseek and follow along.

What Does a Retrograde Planet Mean?

The planets in your natal chart reveal the way you use specific energies. As an example, Mercury is how you think. Venus describes your values and social interactions. When a planet in your birth chart is retrograde, you experience its function subjectively. Which makes your experience and expression of the planet's retrograde energy unique to you. Retrograde planets also say something about a concern with the past. Many astrologers believe there's a link to a past life when planets are retrograde.

When the inner planets Mercury, Venus, and Mars, are retrograde they affect an individual the most personally.

Having Mercury retrograde (☿℞) in your birth chart, is an indication of a mind that turns inward and suggests a person who thinks independently, imaginatively, and innovatively. When Mercury is direct, the individual processes information sequentially. When Mercury is retrograde information is processed non-sequentially and intuitively. Those with Mercury retrograde also absorb thoughts and ideas through osmosis rather than through careful study. The negative is the individual has problems articulating what they know in a sequential and understandable way. But this has nothing to do with lack of intelligence or learning.

When Venus is retrograde (♀︎℞), the person has their own ideas regarding pleasure, beauty, love, relationships, and money. They have an aversion for superficialities and are can be more concerned with themselves than others. It's sometimes said that a Venus Rx acts like Mars. It's true a person with Venus retrograde can be an aggressive lover, but also one who has a lot to learn about the give and take of romance. The negative is that the person often lacks self-esteem and tends to sabotage their love relationships.

The Social Planets in Retrograde

If Jupiter is retrograde (♃℞) the person's morals, ethics, religion, and philosophy are their own, and they look for answers from within rather than subscribing to the dogma of the outside world. They can also be slow to respond to new opportunities.

Individuals with Saturn retrograde (♄℞) in their natal chart may voluntarily isolate themselves from society, or alternately try to cross the boundaries and limitations they feel society places on them. Most suffer from repressed feelings of inadequacy, inferiority, or a nagging sense that despite their best efforts, they could have done more, better, or different.

The Outer Planets in Retrograde

Since the outer planets spend roughly one half of the year in retrograde motion, there's a good chance you have one or more of the outer planets retrograde in your birth chart. Therefore, while they do have meaning, they are not considered as significant as having an inner planet retrograde.

Donald Trump was born on June 14, 1946, at 10:54 am in Queens, New York. His birth data is considered accurate. He has only one planet retrograde. Although there is much more that could be and has been said related to Trump's natal chart. From the retrograde planet perspective, Trump is one of the rare individuals who have only one retrograde planet in their chart. This is significant and quite telling in his personality. 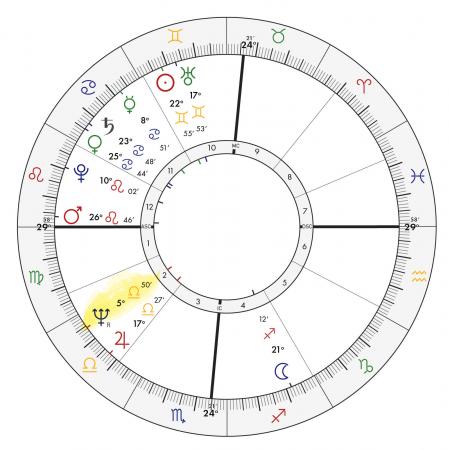 What Does This Say About Mr. Trump?

Briefly, it suggests he's an individual who is not introspective, moves at a fast pace, and seldom takes time to consider consequences. The one retrograde planet in his birth chart is Neptune. Neptune Rx in the second house suggests he's a man who's inwardly confused (♆℞) about his self-worth (second house).

Ted Bundy was born on November 24, 1946, at 10:35 pm in Burlington, Vermont. His birth data is considered accurate. Bundy has five planets retrograde: Venus, Mercury, Saturn, Uranus, and Pluto. Of course, it's foolish to think that every person with multiple retrograde planets in their birth chart is a serial killer.

Retrograde Planets Are Not Curses or Blessings

Retrograde planets aren't innate curses or blessings, because your free will and intention are always operative. Although any astrologer would say Bundy has a difficult birth chart that reveals an unstable childhood and the potential for violence, as well as complicated relationships, there's nothing in Bundy's chart that would have foretold a brutal serial killer. However, from a retrograde planet perspective, it's rare and significant that he has five planets retrograde in his birth chart. You could say the past loomed large in Bundy's life. 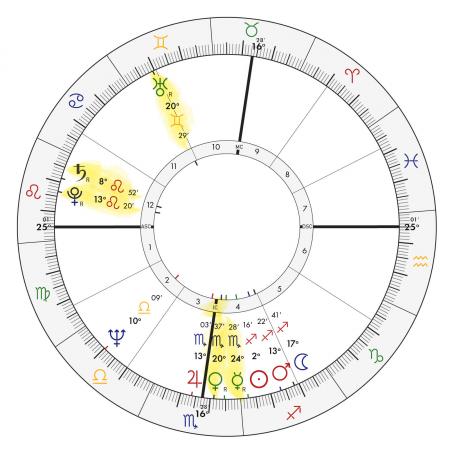 What Does This Say About Ted Bundy?

Bundy's multiple retrograde planets would simply suggest that he was an extremely inward person who was out of step with the world around him and devoted to living by his own set of rules. However, their sign and house placements tell more of his retrograde story.

Bundy's Mercury and Venus are both retrograde and holding hands (conjunct) in Scorpio and in his fourth house. While this reveals Bundy's power of seduction (☿℞♏︎) when it came to women (♀︎℞♏︎). It also suggests that his early home life was intense, painful, tumultuous, and filled with secrets (♏︎). The fourth house is home, family, childhood, as well as your karmic and genetic inheritance.

Mercury Rx in Scorpio suggests Bundy was a deeply introspective thinker who seldom revealed what he was thinking. It's also an indication of a problem with articulating. Childhood friends have confirmed that during childhood (fourth house) Bundy was a quiet loner who was teased about a speech impediment.

Venus Rx in Scorpio suggests that Bundy felt unloved and lacked self-esteem. Bundy was an illegitimate child who was raised (fourth house) to believe that his mother was his sister (♀︎℞♏︎). In Bundy's own words: "It wasn't that I disliked women or were afraid of them, it was just that I didn't seem to have an inkling as to what to do about them."

Although Saturn, Uranus, and Pluto are not as telling of why Bundy might have done what he did as the conjunction of a retrograde Venus and a retrograde Mercury in Scorpio in his packed fourth house. However, because they are retrograde they do contribute more to his retrograde story.

The Importance of Retrograde Planets

As you can see from the birth charts of Donald Trump and Ted Bundy, knowing even the number of retrograde planets in the chart can tell you something about yourself. And when you add the astrological sign and house placements of the retrograde planets, you begin to realize just how important retrograde planets are in a natal chart and in your life's story.

0
Comments
© 2006-2021 LoveToKnow, Corp., except where otherwise noted. All Rights Reserved.
Retrograde Planets in a Natal Chart