How Do Secondary Progressions Work?

The most critical Secondary progressions astrologers take into consideration are:

The transiting planets are the planets moving in the sky. Transits affect everyone and are only personal when they connect with something in your birth chart. Transits of Saturn, Uranus, Neptune and Pluto, the planets of change, are the most important when forecasting a significant event.

Progressions and Transits in Action

When a major life-changing event is going to occur in your life (a marriage, the birth of a child, a divorce, a career milestone, etc.) an astrologer will see these events reflected by both your transits and your secondary progressions to natal chart placements.

An excellent example of the natal chart, the secondary progressed chart and transits working together in forecasting a major life-changing event is the natal and progressed charts of Katy Perry, who became engaged on Valentine's Day 2019. AstroDataBank gives Katy Perry's birth data as October 25, 1984, at 7:58 am in Santa Barbara, California. Just a brief look at Katy's natal chart tells an astrologer that she's an empowered, hardworking woman with charisma and a magnetic persona. Katy is a force of nature who does not question herself and needs to be in control. But what does it say about marriage? 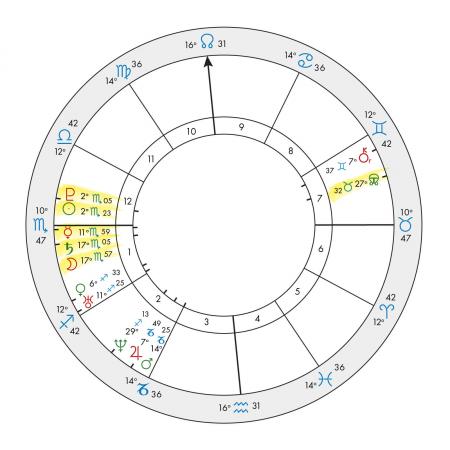 Katy has five planets in Scorpio, Pluto, Sun, Mercury, the Moon, and Saturn, as well as a Scorpio rising. This a powerful group of planets that reveals an independent, mysterious, and private woman who has tremendous strength of will.

Katy's Scorpio Sun is conjunct Pluto in the 12th house. This conjunction says that she's also a hypersensitive woman who's capable of being alone, but is sometimes consumed by loneliness, haunted by vague doubts and fears, and is always seeking a higher meaning or understanding of life and her place or purpose in it

In evolutionary astrology, the Lunar Nodes talk about your soul purpose and life direction. Katy has a Scorpio South Node in her first house and a Taurus North Node in the seventh house. This Nodal axis reveals that while Katy has a penchant for dysfunctional relationships, her greatest fulfillment in life will be in a committed relationship (marriage) that provides an unshakable level of security as well as a peaceful and abundant life.

Katy Perry and Orlando Bloom became engaged on Valentine's Day 2019. Below is Katy's natal progressed chart for that date. 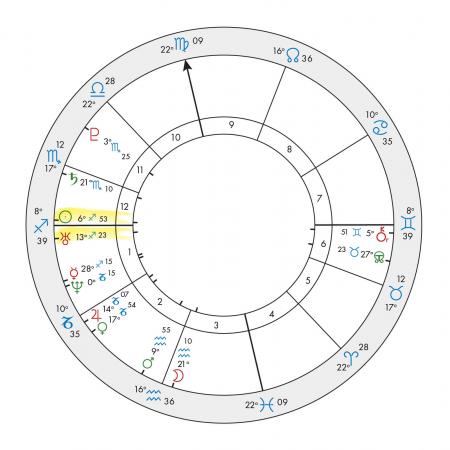 Committing to the Future

Katy is in her Crescent Solar/Lunar phase. This Lunar phase reveals that Katy is in a period of time when an inner urge to expand her life could take her out of her comfort zone. The purpose of the progressed Crescent Lunar phase is to commit to the future, get a clearer idea of where she's going, and put a foundation in place for her future.

Katy's progressed Sun and Uranus conjunct her progressed Ascendant, marks a new epoch in her life. Katy is passing through a very romantic and adventurous period when her relationships with significant others will be more critical than usual.

Katy's natal chart, surrounded by her February 14, 2019, secondary progressions (in green) and transits (in red), is below. 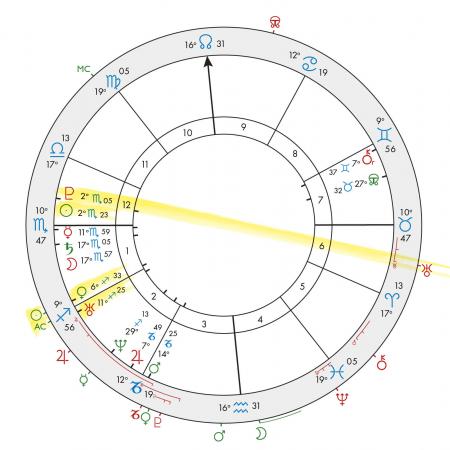 A "Love of Your Life" Progression

In February 2019, Katy's progressed Sun(☉) (evolving sense of self) in Sagittarius (♐︎) was conjunct her natal Venus (♀︎) in Sagittarius. When the progressed Sun shines it light on Venus in a natal chart, it gives light and life to all that Venus represents. This conjunction is one of the best indicators of a year when love will shine bright in life and often denotes marriage. Love is further emphasized because Venus rules Katy's seventh house of committed relationships.

A Once in a Lifetime Transit

In 2019 Katy is in the midst of a "once in a lifetime" long-lasting transit (2018-2021.) This transit could have played out in many ways. But the Sun in her progressed chart conjunct her natal Venus puts this transit into the context of her life.

Uranus (♅) is a planet whose transits disrupt the status quo and changes your life. Transiting Uranus is opposing Katy's indomitable and willful Sun/Pluto conjunction. Which suggests that she would have some revolutionary (Uranus) and self-transformational (Sun/Pluto) changes in her life during this time.

On February 14, 2019, transiting Mars (♂︎), the planet that "triggers" events related to long-lasting transits, conjoined transiting Uranus and set off the once in a lifetime transit. On Valentine's Day 2019, Orlando Bloom gave her a surprise engagement party, proposed in front of family and friends, and suddenly Katy was engaged to be married.

Predicting With Progressions and Transits

Of course, there is so much more that could be said about Katy Perry's natal chart, progressions, and transits. The brief interpretation above is related to love and the timing of her engagement. However, it's an example of how an astrologer, knowing just a bit about Katy's life, would use her natal chart, the transits to her natal chart, and her progressed chart to forecast Katy's marriage engagement.

Progressed Natal Charts and How They Work