Synastry is a highly sophisticated art that involves the comparison of two natal charts to determine areas of strength and weakness in a relationship. Synastry is a valuable tool for people who want to examine their relationship with another person based on the interplay of aspects between the two birth charts.

Before you can understand the basics of a synastry chart, you'll need the be able to recognize the astrological glyphs (symbols) and have an understanding of the astrological signs, planets, aspects, and houses. You'll also need to have a grasp of the basics of interpreting a natal chart because many issues in the individual natal charts can mitigate or intensify the aspects found in the couples synastry. 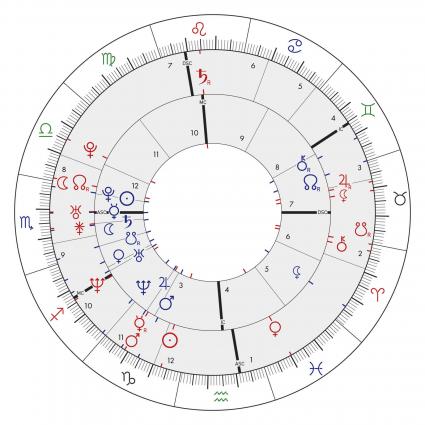 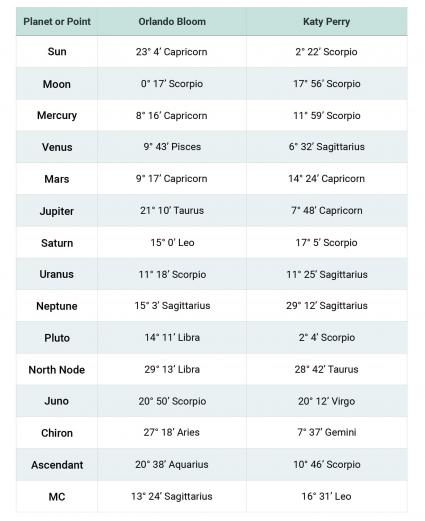 The Aspects in Synastry

Popular Sun Sign compatibility considers how one astrological sign relates another. Synastry is more complex, nuanced, and exact. It deals with how the degree of the signs a planet or other important placements occupy in one chart aspect the degrees of the planets and other important placements by sign occupy the second chart. Keep in mind that just because planets are in the same sign, or in signs that sextile, square, trine or oppose one another, the planets aren't in aspect unless they are within the orb of influence.

The "orb" of influence refers to the exactness of an aspect. If orb is tight (almost exact), the aspect is more powerful. In synastry, an orb of 4° or less will reveal the essential features of the relationship. Those with greater orbs fill in the background of the relationship. 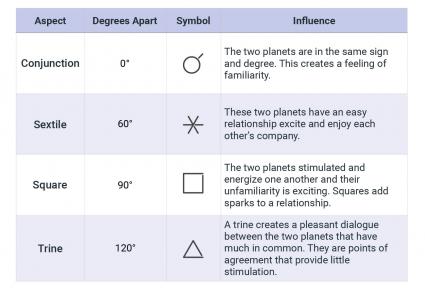 The easiest and most fun way to gain a basic understanding of how synastry works is to follow along in dissecting the synastry of a couple you know something about due to their celebrity. Katy's progressed chart and transits foretold the engagement. Now, what does synastry reveal about the relationship? Below are a few examples of important aspects between the planets and placements in Katy and Orlando's synastry chart.

Lunar Node connections are one of the best indicators of a soulmate relationship. Orlando's Moon at 0°18' Scorpio and his North Node at 29°13 Libra are both conjunct Katy's Pluto at 2°04' Scorpio and her Scorpio Sun at 2°22' Scorpio. All these conjunctions are within an orb of 2°. These are powerful connections that indicate when they met there was a magnetic attraction. This also suggests that Katy and Orlando were meant to be together and have a destiny to fulfill in their life together.

Katy's Neptune at 29° 12' Sagittarius is Sextile Orlando's North Node at 29° 13' Libra (orb in 0°). This connection indicates that with Katy by his side, Orlando is more sensitive, imaginative, and intuitive, as well as enabled to develop a transpersonal state of consciousness. Interestingly, in 2018, Katy was invited to speak at the Vatican about transcendental meditation and Orlando was with her.

When the Sun and Moon are conjunct in synastry, it creates a level of understanding and comfort that is effortless. Katy's Scorpio Sun at 2°22' Scorpio is conjunct Orlando's Moon at 0°18' Scorpio (orb 2°). This connection indicates that Orlando finds comfort and security in "who" Katy is as a person, and she feels cared for and nurtured. They have a deeply committed and intensely emotional (Scorpio) relationship that has what it takes for a long-term bond.

Juno is the Marriage asteroid, and Saturn is the planet of commitment when these two are conjunct marriage is an almost sure thing. Orlando's Juno at 20°50' Scorpio conjunct Katy's Saturn at 17° 5' Scorpio (orb 3°45'). This connection indicates that what Orlando needs in a marriage (Juno in Scorpio) is fulfilled by the Scorpio type of stability Katy's Saturn brings to the relationship.

Katy's Mercury at 11°59' Scorpio is conjunct (orb: 0°41') Orlando's Uranus at 11°18' Scorpio. This tight conjunction promotes idealism and futuristic thinking. As a couple, Katy and Orlando are likely to come up with some fantastic, original ideas, as well as discover alternative ways to see the world.

Katy's Jupiter at 7° 48' Capricorn is conjunct (orb: 0°28') Orlando Mercury at 8° 16' Capricorn. This aspect indicates that there's a great deal of talking in the relationship, and Orlando's practical understanding of life supports Katy's need to share her wisdom.

Orlando's Uranus at 11° 18' Scorpio conjunct (0° 31' exact) Katy's ascendant at 10°46' Scorpio. This aspect is an indication the Orlando will bring exciting experiences that are likely to shake up Katy's life and bring her brand-new ways of thinking and being.

Katy's ascendant at 10°46' Scorpio is trine (1°03' from exact) Orlando's Venus at 9°43' Pisces. This aspect reveals their attraction to one another as well as their ability to be both friends and lovers.

Saturn connections create stability and commitment in relationships. However, Saturn squaring the Moon can be a downer. Orlando's Saturn, at 15°01" Leo, squares Katy's Moon, at 17° 56' Scorpio. However, because Orlando also has a Scorpio Moon square Saturn natally, the often emotionally depressing connection has been mitigated. Orlando, rather than weighing Katy done emotionally, is more likely to stabilize Katy's intense and anxious emotional nature and provide her with a feeling of security.

Mars square Pluto is considered one of the most challenging aspects in synastry. It speaks of explosive tempers, burning desires, and the need to prove something. Katy's Mars at 14°24 Capricorn is square (0°13' from exact) Orlando's Pluto at 14°11' Libra. This square describes a mutually exciting exchange of energy that's fueled by an emotional intensity that can provoke turbulence in Katy and Orlando's relationship. This aspect can spark passionate sex as well as passionate fights. However, if Katy and Orlando are truthful and honest with each other and work as a team, theirs can be a power coupling.

In synastry, the interplay of houses between two charts determines what area of life will be affected concerning the planets involved. In the synastry between Katy and Orlando:

What Synastry Can and Can't Do

Great synastry doesn't always translate into a perfect relationship. Many variables exist when two people come together. Each individual carries the baggage of their past experiences, family history, social background, and much more into the relationship, and this can result in an endless number of outcomes. However, what synastry can do is give you a different perspective and tell you where there can be ease or difficulties in a relationship. The future of any relationship does not depend upon good synastry, it's always determined by the individuals.