In March 2019, Forbes Magazine named Kylie Jenner, the world's youngest billionaire. However, because she came from a "privileged background" critics argued that she wasn't self-made. Kylie's story is not a rags to riches story. However, her natal chart reveals a business-savvy young woman with great potential for self-made wealth.

Kylie Jenner was born on August 10, 1997, at 5:25 in Los Angeles, California. She's the youngest of a blended family of nine Jenner/Kardashian siblings and the most financially successful. Everyone born on this date shares the same planets in signs and aspects. However, it's the birth time and location that determine the rising sign, the angles, and house cusps that separate one person from another. It's these that tell the story of Kylie's financial success.

Older Than Her Years: Capricorn Rising

Born when Capricorn (♑︎ ) was rising, Kylie is reserved, has a great sense of duty, and is very serious about achieving her ambitions. Even during childhood, Kylies would have behaved much older than her years. True to Capricorn rising, in 2014, at age 14, Kylie and her sister Kendall collaborated with PacSun to create a line of clothing, "Kendall & Kylie." The following year Kylie launched her own cosmetics line called Kylie Lip Kits, which was renamed Kylie Cosmetics the next year.

Kylie's Knack for Creating Wealth: Sun in Leo in the Eighth House

Kylie's Leo (♌︎) Sun (☉) bestows her with royalty status, and because it's in the eighth house, she has even more personal charisma, power, strength, courage, independence, and endurance than most Leos. With her Leo Sun in the eighth, Kylies was born with the potential to be a successful businesswoman who could create wealth.

With her Moon (☽) in Scorpio (♏︎) Kylie's public image (10th house) is magnetic, and she has a tremendous amount of ambition (Scorpio). The Moon in the tenth is also an indication that Kylie would be very open to putting herself in the eye of the public and would also be publicly recognized for her achievements. This placement also suggests that Kylie's could be successful in a career that had something to do with transforming females (Scorpio Moon). Kylie is the founder of Kylie Cosmetics, LLC.

Mars in Libra on the Tenth House Cusp

Mars (♂︎) in Libra (♎︎) is the most elevated planet in her chart. Libra is the sign that stands for beauty, aesthetic harmony, and balance. With Mars in Libra conjunct her Midheaven (career), it's no surprise that Kylie is the founder of a successful cosmetics brand.

An individual's prosperity and wealth can be determined through the study of the second, eighth, and eleventh houses. Strong placements in these three houses, irrespective of a person being born "into privilege," will be showered with personal wealth at some time during their life. The condition of Jupiter, the planet of expansion, and Venus, the planet of money are also important when determining the potential for wealth in a birth chart. Kylie's Jupiter is in the second house, and her Venus is in the eighth. 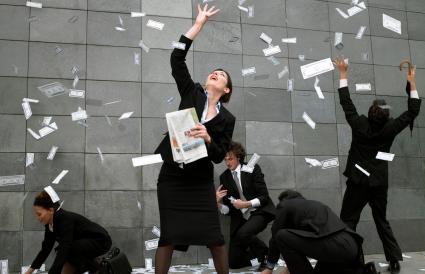 Jupiter in the Second House

With Jupiter in the second house, Kylie was born with the potential for "personal" wealth. Kylie's Jupiter in Aquarius is opposite her Leo Sun. You can be sure Kylie is confident, believes in herself, and is gifted with luck when it comes to making money.

The South Node (☋) talks about past life and early life; what comes naturally to you. Kylies South Node (SN) is in Pisces (♓︎) is also in the second house. Kylie is gifted with a vivid imagination, exceptional creativity (Pisces). Plus, creating wealth comes naturally to her (second house SN). Kylie had probably been very wealthy in a previous life, and the ability to make money reappeared early in her current life. Yes, She has an innate gift for accumulating self-made wealth. However, her Pisces SN in the second house also suggests that Kylie's self-worth is most likely tied to her personal finances.

The eighth house is the house of other people's money. Kylie has her Leo Sun as well as Mercury (☿) and Venus (♀︎) in Virgo(♍︎) in her eighth house. Venus and Mercury in Virgo give Kylie excellent analytical, organizational, and accounting abilities and her North Node (☊) reveals Kylie's need to be productive and to create something tangible and concrete that others would buy.

North Node in Virgo in The Eighth House

Kylie's Virgo North Node(☊) is conjunct Mercury and Venus and in the eight houses. Individuals usually don't begin to confront and work on their NN until after their first Saturn (♄) return at about 30 years of age but it's something they touch on in early life and strive for their entire life. Those with a Virgo North Node (☊) in the eighth house were born to leave their over concern with accumulation and ownership behind, learn moderation and self-discipline, as well as lead a simpler life.

Interestingly, in 2014, Kylie and Kendall Jenner, along with a ghostwriter, coauthored and released two young adult novels: Rebels: City of Indra and Time of the Twins. Of course, the reviews weren't great but this may have been Kylie's first attempt at her North Node, Mercury, and Venus in Virgo. Virgo, ruled by Mercury, is the astrological sign of authors. Many great writers have placements in Virgo.

Related to wealth, the eleventh house is the income from your career (10th house). It's also the house where you connect with groups of people that extend your social life and status, as well as those who will aid you in your career. Interestingly, it's the house of social media and the ability to communicate with people all over the world.

Pluto in Sagittarius in the Eleventh House

Kylies has Scorpio on the cusp of her eleventh house and its ruler Pluto (♇) in Sagittarius (♐︎) in the eleventh house. Pluto is associated with wealth and power. Sagittarius, ruled by Kylie's Jupiter in Aquarius, is the sign of salesmanship.

Due to her family's fame, Kylie had a powerful (Pluto) social media (11th house) reach before she started anything. And it was the power of her reach on social media that Kylie uses to launch and promote her cosmetics. She has almost 200 million followers on Facebook, Instagram, Twitter, and Snapchat.

The Drive of a T-Square

A T-square is a pattern occurs when two planets oppose (☍) one another and both square (□) a third planet, creating an isosceles triangle. T-squares stimulates drive and courage, but also tension and conflict. Kylie has a T-square involving Sun, Jupiter, and the Moon. 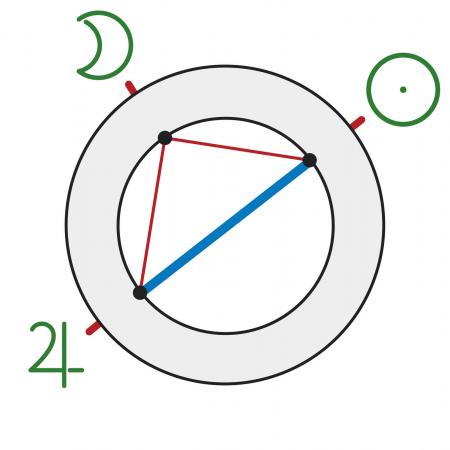 There's a bit of grandiosity in the natural exchange of energy between Kylie's eighth house Leo Sun in opposition to her second house Jupiter in Aquarius that attracts more and more wealth. Both the Sun and Jupiter are square (challenging/driving/pushing) her Scorpio 10th house Moon to greater heights. This dynamic T-square is the driving force that led to Kylie achieving such financial success with her brand, Kylie Cosmetics.

In true Leo fashion, young Kylie spends her billions on luxuries; a 13,000 square foot mansion, a collection of properties and cars worth untold millions, bling fit for a queen, and more and more. An astrologer might wonder what's in store for her after age 30. Kylie's lesson in life, related to Lunar nodes in the second and eighth houses, is to come to understand that she is more than what she owns and there are some very important things in life that money can't buy. However, she may already be yearning for those things. Kylie has said: "When I'm, like, 30, I want to go off the map, have a family, and live in Malibu with a farm, and just raise my own chickens." However, Mercury and Venus conjunct her North Node in Virgo suggest she may also be perfecting her innate but undeveloped talent for writing.