Despite his superstar status, Keanu Reeves remains something of an enigma. While he garners his fair share of celebrity gossip, Keanu also attracts attention as a man who seems to be an amalgamation of who he actually is and the characters he plays. Even as the new face is Saint Laurent, he appears to be a more fashionable version of Neo, his famous role in The Matrix.

Astro-Databank reports that Keanu Reeves was born on September 2, 1964, at 5:41 am in Beirut, Lebanon. This data is rated "C" because it's a rectified time based on Reeves being quoted as saying he has Virgo rising. Chart rectification is a specialized and time-consuming service provided by some astrologers where specific key events in a person's life are used to pinpoint the Ascendant (Asc) degree, the angles of a chart, and the house cusps. 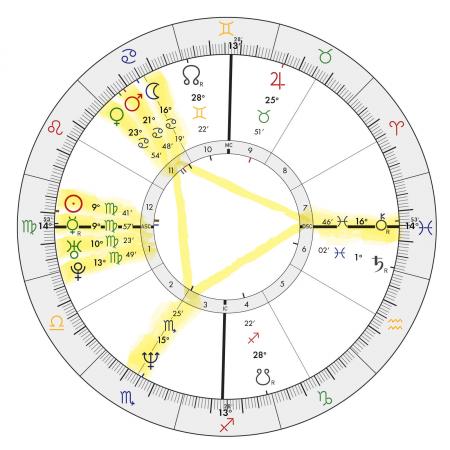 Reeve's Sun (☉) is in Virgo (♍︎), but he's definitely not a typical Virgo. He has Mercury Retrograde(☿℞), Uranus (♅), and Pluto (♇) fused with his Sun, forming a Virgo stellium that sits in his Virgo Rising sign (Asc) While any concentration of Virgo spells efficiency, productivity, and a fair share of worrying, this pileup on the Asc reveals an otherworldly mask that can take on the characteristics of a well-programmed computer. Keanu's Virgo purity and simplicity contain within it a multiplicity of complexity.

This group of Virgo planets says that Reeves is a revolutionary and Universal (Uranus) thinker (Mercury) who takes nothing at face value (Mercury Rx) and has a desire to penetrate to the core of every experience in a compulsive (Pluto) and experimental (Uranus) need to eliminate, purify and perfect himself (Virgo Sun).

The Face of a Generation

With Uranus and Pluto conjunct on his Ascendant, it could be said that Reeves is the face of his generation. Those born during the 60s have both Uranus and Pluto in Virgo. They are free-wheeling, impulsive, pragmatic, suspicious, skeptical, sharp-eyed survivalists who passionately reject superficiality. They are also the first children of the computer age.

Sensitivity Must Protect Itself

Reeves otherworldly mask belies his extreme sensitivity. He has three planets, the Moon (☽), Mars (♂︎), and Venus (♀︎) conjoined in Cancer (♋︎). Cancer, ruled by the Moon, is the Cardinal Water sign. The basic concept related to Cancer is instinctive nurturing and empathy. Any planet placed in Cancer will be colored by feelings and the need for self-protection.

Reeves never forgets, is melancholic, brooding, and self-protective. He's also responsive to everything and everyone around him and has a striking depth of emotion and imagination.

Venus in Cancer indicates that Reeves places great value on the emotional bonds he creates. He's not casual about love. Reeves may have a tough exterior, but underneath he's a sensitive and sentimental soul and can hold on to a lost love for years and years.

With Mars in Cancer, Reeves is a ferocious protector and defender who's at the mercy of his intense moods. However, he can play on his emotions, which makes him a natural performer who's also sexually seductive and can move others to tears or laughter. It's in acting that Reeves allows himself to freely expresses the full range of his emotions.

Reeves is a Man of the World

Regardless of his Cancer planets, Reeves home and family are not traditional. He's a man who feels at home in the greater world and treats everyone with familiar empathy (Cancer on 11th house cusp.) He's always lived a gypsy lifestyle. You could even say that any place he chooses to hang his hat is home (Sagittarius (♐︎) on the fourth house cusp.)

As if three personal planets in Cancer isn't enough sensitivity, there's more. Reeves also has a Grand Water Trine (△), which includes his three Cancer planets, Neptune (♆) in Scorpio (♏︎) and Chiron (⚷) in Pisces (♓︎) (see the triangle in the chart above). Chiron in Pisces increases his fear of opening up, while Neptune in Scorpio increases his emotional intensity. This watery trine indicates that Reeves seeks peace and tranquility but can drown is his need to protect himself. His tendency is to escape into the fantasy world of the characters he plays and release the emotional pain he feels by morphing into those characters.

Keanu Reeve's life had always been riddled with instability and tragedy. However, in 1999, just as he shot to super-stardom in The Matrix, his personal life began falling apart. He lost his stillborn baby girl. This tragedy ended his relationship with Jennifer Syme, the love of his life. Then, less than two years later, Jennifer died in a tragic car accident. Reeve's was devastated by these loses. In true Cancer fashion, he said to The Guardian in 2019: "Grief and loss, those are things that don't ever go away. They stay with you."

Reeves' Dark Night of the Soul

Death, rebirth, transformation, and metamorphosis are words astrologers use to describe what happens during a Pluto (♇) transit. Transiting Pluto square natal Pluto is a once in a lifetime event. Pluto was transiting Reeves' fourth house cusp and making a square aspect (90°) to his Sun, Mercury, Uranus, and Asc in Virgo when these tragedies occurred. This was a long drawn out transit that began in 1998 and didn't wane until late 2002. As Pluto squared Reeve's Virgo stellium, destiny challenged him to redefine who he was and find greater meaning in his life.

How Keanu Reeves Has Changed

In 2006 Keanu Reeves was featured in a Sunday Parade Magazine in an article titled I Don't Want to Flee From Life. When asked how grief and loss have changed him Keanu responded: "I'm trying not to be alone so much. And, man, it's a struggle. I want to get married. I want to have kids. That's at the top of the mountain. I've got to climb the mountain first. I'll do it. Just give me some time."

Keanu's Reeves Has Aged to Perfection

Keanu Reeves has been in and out of the spotlight for decades. And each time he's resurrected he's further perfected himself. You can only wonder what the coming years will bring. This is the gift of having a transformative Virgo stellium on his Ascendant.