Gordon Ramsay is one of the most gifted chefs of his generation. He's hosted over 23 TV shows related to competitive cooking and owns 35 restaurants globally. As a chef, Ramsay is notoriously critical, abrupt, verbally abusive and bad-tempered. However, those who meet him out of the kitchen say that he's a cordial, charming, personable, and humorous man. Astrology offers insights into Gordon Ramsay's true personality.

Gordon Ramsay was born on November 8, 1966, in Johnstone, Scotland, at 6:05 pm. This birth data has an AA Rodden rating and is considered accurate. 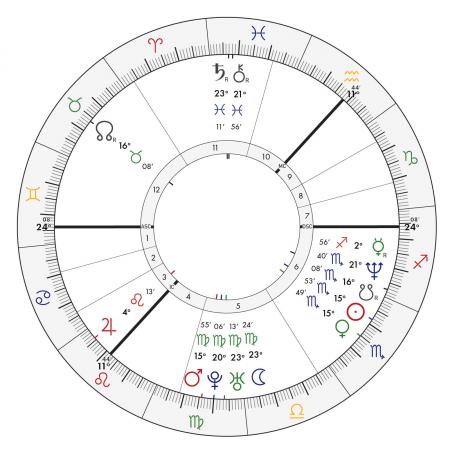 Ramsay has two bundles of planets called stelliums, one in Scorpio (♏︎) and another in Virgo (♍︎). All the planets in these two stelliums are in a sextile aspect (60° of separation.) When planets are sextile one another, the energy created is one of harmony and cooperation. For Ramsay, this is a powerful indication of his obsession (Scorpio) with perfection (Virgo.)

Ramsay is passionate, intense, likable and inspiring. His Sun (☉), Venus (♀︎) and Neptune (♆), as well as his South Node (☋), are all conjunct in Scorpio the Sixth house. He's a prime example of the Scorpio drive, passion, and aggression. So, it's fair to assume he's a very intense (Scorpio) man, but Venus makes him likable, while Neptune makes him inspiring. Gordon himself says that it's his "level of passion that often gets misconstrued as anger." Venus, the ruler of Taurus, ties the stellium to his fulfillment in life, his North Node (☊) in Taurus (♉︎).

Ramsay has a perfectionist, hypercritical, and detail-oriented Virgo stellium in his fifth house. He has Mars (♂︎), Pluto (♇), Uranus (♅) and the Moon (☽) in Virgo. Pluto and Uranus in Virgo indicate a man who is a rebellious, impulsive, pragmatic, sharp-eyed individualist, who despises authority and is anything but superficial. These two outer planets fused with his Mars and Moon speak of his tremendous drive (Mars/Pluto), his abruptness (Uranus/Moon), as well as his emotional conviction about demanding creative (5th house) perfection from himself and from others (Virgo Moon). In Ramsay's case, this would be the culinary creations. Uranus, the ruler of his Aquarius (♒︎) mid-heaven ties all this to his public image (10th house). The ruler of this Virgo stellium is Mercury (☿) in Sagittarius (♐︎). Mercury also rules Ramsay's Rising Sign.

The "Gift of Gab"

Gordon Ramsay has Gemini rising, indicating that he's chatty, restless, and impatient, but goes after what he wants in a light-hearted manner. Gemini's ruler Mercury is in Sagittarius. You can assume that Ramsay is enthusiastic and usually has something funny to say. Ramsay's Mercury is in a trine (△) aspect to Jupiter (♃) in Leo (♌︎). This combination ensures he's a showman (Leo) and a salesman with a gift for gab, who's happy to sign autographs and have his picture taken with fans he meets on the streets. Of course, it also says he's strongly opinionated, is prone to rant, and isn't shy about telling anyone exactly what he thinks.

Ramsay's birth chart has a Bucket pattern, which occurs when all planets but one are distributed within a 180° semicircle ("bowl" of the bucket). The remaining planet (the Handle Planet), is the most important planet of the Bucket Pattern. It's the point of release. You could say it's key in carrying the individual's life along, and the individual is prone to show off this energy.

Ramsay has all but one planet in the lower half of his chart. Saturn (♄), which is opposite (180° of separation) his Virgo stellium, is the handle of his bucket. Some might see this as restrictive and inhibiting, but for Ramsay, it's been the controlling and moderating influence in his life. It's Saturn, the planet of self-discipline, perseverance, ambition, authority, and maturity that makes Ramsay enterprising and high reaching. It's also what's made him a success.

Is there any indication of that Ramsay would find success and fulfillment as a chef and restaurateur in his birth chart? Yes! In Evolutionary Astrology, the South Node (☋) and North Node (☊) reveal your life's mission. Ramsay's South Node in Scorpio and his North Node is in Taurus (♉︎).

The South Node often says something about your young life. When the South Node is in Scorpio, early life was likely emotionally chaotic. It's reported that Gordon had a tough early life. His father was an abusive drunk and he had a brother who was into drugs and sent to jail. He initially wanted to be a footballer, but that dream was taken away after an injury, and he wound up working in a kitchen, eventually training under old school chefs who were always in his face. This was the culture Ramsay was brought up in, and this became his habit pattern (Scorpio SN), and he continued to recreate the emotional chaos of his younger life but mellowed (Taurus North Node) as he aged.

With his North Node in Taurus, he's sensual, and his fulfillment in life was to become mellower and take pleasure in pleasing the five senses: touch, sight, hearing, smells and tastes. Nothing would give Gordon Ramsay more sensual pleasure (Taurus) or be more fulfilling (NN) than creating, preparing, and serving gourmet meals. Ramsay was to find his fulfillment in the kitchen. Becoming a chef not only increased Ramsay's self-worth (Taurus), it also steadily increased his net worth (Taurus).

Ramsay's birth chart confirms that he's volatile and profane, always honest, blunt and straight to the point, but that he's also friendly and funny. Ramsay is also caring and concerned in his own tough-love way. Some say he's the nicest guy around, but that once he steps into the kitchen, he gets into "chef mode" -- he's like a passionate coach who calls the plays, gets excited, and keeps everyone on their toes.