If you have an Aquarius stellium in your birth chart, you're probably described as social and friendly but quirky and full of strange but fascinating ideas. Some individuals will see you as exciting, while others will see you as a rebel or trouble maker. But one thing's for sure: you're definitely a rugged, individualist and bold thinker who lives your life your way.

What Is a Stellium in Aquarius?

A stellium is a group of three or more planets in the same sign that are conjunct one another. An Aquarius stellium is simply three or more planets conjunct in Aquarius. Aquarius is the masculine (outgoing) Fixed (unmovable) Air (mental) sign of the zodiac. It represents independent and out-of-the-box thinking, as well as the use of the intellect, mind, and artistic skills to engage the outer world.

The Rulers of Aquarius

Due to its ruler, Uranus, Aquarius is known for its eccentricity and unique take on life. However, it's often forgotten that Saturn, the taskmaster, is the traditional ruler of Aquarius. Saturn gifts Aquarius with the hard work ethic and rational mind for which Aquarius is also known.

A Different View of Life

Those with an Aquarius stellium have a different view of life. Emotions don't cloud their clarity, and their personal feelings don't sway them. They are iconoclasts with an objective and universal way of thinking. Whether they're engrossed in thoughts about music, art, community, human rights, animal protection, alternative healing, business, etc., their ideas are exceptional and inventive, but also rational and objective.

Negatives of an Aquarius Stellium

Of course, an Aquarius stellium can also exaggerate some darker traits of Aquarius, and the individual can:

The House and Planets of an Aquarius Stellium

The houses or houses where the Aquarius stellium is located will be the central focus. The house where Uranus and Saturn reside will tell you where the focus originated. Additionally, each planet involved in the stellium rules a house, and those houses are drawn into the mix. This means a pack of Aquarian planets can color many activities and areas of the person's life.

The effects of an Aquarius stellium can be better understood when you study the life's story and the natal chart of Garth Brooks, whose quirky and rowdy style of country music changed the genre and made him the top-selling solo album artist in U.S. history. Garth was born on February 7, 1962, at 1:07 PM in Tulsa, Oklahoma. He has a super-charged Aquarius (♒︎) stellium that includes the Midheaven (MC). Aquarius is also on the cusp of his ninth house. The Boot gives Garth Brooks a very Aquarian description when they write he's the "People Loving People" singer. 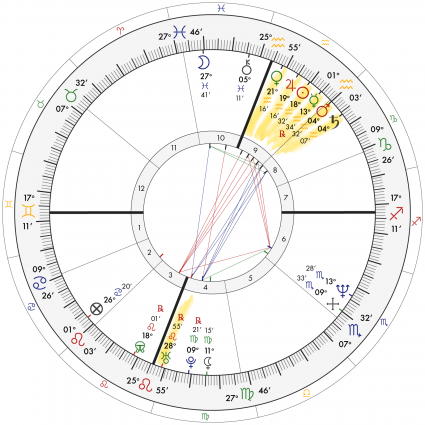 Uranus is in Leo in the fourth house of his birth chart. Garth Brooks is part of a large group of individuals born between early 1956 and late 1962 that would find individualistic ways of expressing themselves and making their mark on the world. In his fourth house, Uranus reveals that the impetus for his worldly fame (MC) began with home and family. Early family life:

The ninth house is a life-affirming house, and this jam-session of Aquarian planets in the ninth house is always on stage (pun intended) for all the world to see. It also reveals that Garth Brooks adventurously looks at the world in a wide-angled manner (9th house). The bigger picture of life inspires his robust participation in life.

With an Aquarius Midheaven, Garth Brooks' claim to fame was to come from doing something unique and different from everyone else. True to his exaggerated Aquarian nature, he infused his brand of country music with new sounds and athletic performances that rivaled stadium rock bands. His vocals were more aggressive, and the videos that accompanied his music contained storylines that were globally oriented (Aquarius.) Some of his best and most controversial work, The Thunder Rolls, Friends in Low Places, and We Shall Be Free, deal with social issues (Aquarius.) Garth Brooks' Aquarius stellium is written all over his life story.