You're in love with a Taurus man and dreaming marriage is on the horizon. You can't imagine how this sweet, hunk of a man could be anything but a wonderful husband. Unfortunately, as hard as it is to get a Taurus man to walk down the aisle, it will be just as hard to get rid of him if the marriage turns sour. So, before broaching the subject of marriage with him, perhaps some astrological understanding of what it would be like to be married to a Taurus man would be helpful.

A Taurus man is husband material. He'd be a loyal, patient, dependable, gentle, loving, kind, romantic, faithful, hardworking, and committed husband. Not only that, but he radiates calm fortitude and revels in all the sensual pleasures of life.

As a husband he's reserved, a good listener, dislikes change, and loves his possessions. His goal is to be successful and attain status and everything that comes along with that: an elegant home with beautiful furnishings, an opulent well-landscaped yard, a high-end car in the driveway, and dinners at the country club with his lovely wife beside him.

A Taurus husband won't mind if his wife works and if necessary, he willingly cooks and helps with the children. As a matter of fact, he'll probably encourage his wife to work and be thrilled if she has a successful career and makes more money than him. Why? He enjoys the extra money. It adds to the bank account, bolstering his sense of security, and with two paychecks there will be enough money to buy more of the pleasurable goodies of life.

However, as warmhearted and steadfast as a Taurus man is, when you marry a man you have to take the good and the bad, and you'll soon find out a Taurus husband has a hedonistic nature and is prone to being materialistic, possessive, stubborn, selfish, self-indulgent, and self-absorbed. Not to mention he can also have a lazy streak and if you push the right buttons, a vile temper.

Symbolized by the Bull, Taurus is the feminine (receptive) fixed (unmovable) Earth (practical) sign of the zodiac. At it's most basic, Taurus is the human need for security and the ability to survive and thrive in the material world while peacefully enjoying all the abundance and pleasures the earth has to offer.

Meaning? A Taurus husband is a pacifist who lives his life in such a way as to derive the greatest pleasure and happiness. He aims to have his physical senses pleasurably stimulated and is all about beauty and abundance: great food, good wine, fine music, and long afternoons spent lounging in lavish comfort.

It's said that a picture is worth a thousand words and Disney's 1938 cartoon, Ferdinand, reveals much about the innate characteristics of a Taurus husband.

When it comes to sex and romance, a Taurus husband is at his epicurean and hedonistic best.

A Taurus man is a cuddly, huggy sort of guy who takes great pleasure in the traditional trappings of romance - flowers, scented candles, soft music, wining and dining - and that doesn't change after he marries. However, he's not just romantic; he's also sentimental.

He's a husband who won't forget important dates, like the date he first met his wife or the day he first slept with her. But most important of all, he'll always remember his wife's birthday or their anniversary.

On these special days, he will be unbelievably romantic and generous. A Taurus husband wants his wife to know that she is loved, adored, and that he is committed to her. He's more about show than tell when it comes to the one he loves.

Hint for the wife or for any woman hoping to marry a Taurus man: A Taurus man absolutely enjoys receiving gifts. Saying I love you is nice, but what really shows him he's loved is receiving a gift.

The Joy of Sex

Sexually, he's at his hedonistic best. A Taurus man takes great joy and pleasure in sex. There's no man better at making sex a lavish, joyful, pleasurable experience, for himself and also for his partner. He revels in the tastes, feels, smells, sounds, and visuals of the entire experience.

However, a woman should realize that hedonism is inherently self-indulgent, and a stereotypical Taurus husband is prone to lay back and enjoy the scenery while he's being pleasured.

Hint to a woman who's involved with or is married to a Taurus man: You're going to have to be a bit straightforward to get your needs met. 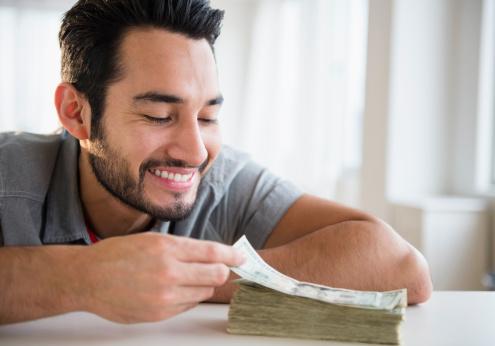 "I have therefore I am" is always in the background of a Taurus man's thinking, so money and finances are huge for a Taurus man.

He's resourceful and hardworking, so, making money is seldom a problem and for better or worse, he'll always want to handle the family finances. On the plus side, the bills will be paid on time. Negatively, he's tight, and a spendthrift wife is likely to have problems.

However, he also has some weaknesses when it comes to money. He tends to be materialistic and has a taste for luxury. These two shortcomings can sometimes drive him to make some bad financial decisions. In short, he wants what he wants when he wants it, and his wife may have to keep him in check.

A Taurus husband might also keep a secret stash of money while complaining to his wife about not having any money and at the same time, he's spending money on extravagant non-essentials.

To be clear, a Taurus man has a complicated relationship with money.

Hint: It's best if a Taurus man's wife has an income of her own.

As a father, he's gentle, patient, and a steady grounding influence in his children's lives. He enjoys cuddling his kids and is openly affectionate with them. He'll also instill his children with a strong work ethic, teach them practical skills, and provides them with a sense of material security.

However, he's also a bit of a softie who's prone to indulge and spoil his children. Everyone knows spoiled kids become elitists who believe that just because they "are" they deserve whatever they want.

Hint: It will be up to his wife, the mother of his children, to mitigate this.

Probably the worst and most disturbing traits of a Taurus husband are his unbelievable stubbornness, his inflexibility, and his vile temper.

When it comes to changing his mind about something, the more his wife pushes, the more resistant and angry a Taurus man will become. Push his buttons, and a Taurus husband will go into a rage or refuse to listen or interact with his wife.

If you have a Taurus man as your significant other remember you're not going to change him unless you know how to deal with him. The best way to do this is to pause and calm yourself down, prioritize what's the most important to you, never come on too strong or argue, tell him face to face and heart to heart what's bothering you and why, and then listen to what he says. Most importantly, go slow and give him time to ponder.

The Astrology of Marriage

An individual is much more than their Sun sign, and the astrology of marriage is complicated. Not only can other placements in a Taurus man's chart mitigate or exaggerate everything that's written above, but there's also the synastry between the husband's and wife's birth charts, the composite chart, and the wedding day chart that hold sway. So, if you're married to or seriously contemplating marriage to Taurus man and really want to know what being married to him could be like, it's best to make an appointment with a professional astrologer who specializes in relationships.

1
Comments
© 2006-2020 LoveToKnow, Corp., except where otherwise noted. All Rights Reserved.
Resources, Advice & Tips for Covid-19
Read More
What It Is Like to Be Married to a Taurus Man