Can a Scorpio woman and a Sagittarius man find true love? The needs of these autumn signs differ strongly, but they can learn to understand and support one another, developing deeper intimacy and trust with time. Given a baseline of commitment, honesty, and courage, they can create a truly transformational relationship.

A woman with the Sun in Scorpio feels everything. This gives her a profound vulnerability which she hides deep beneath her surface. Her desires are a force; she's hard to resist when she focuses her will. If she is betrayed or lied to she doesn't easily forgive and she cannot forget. Like an iceberg, most of her being exists in the depths. She can be difficult to know. She is fascinated by things most people are frightened of, such as fear itself. As emotion is the substance of her being, letting go is not possible for her. She perceives what others deny and is repelled by dishonesty. If you lie to this woman, she will lose all respect for you. 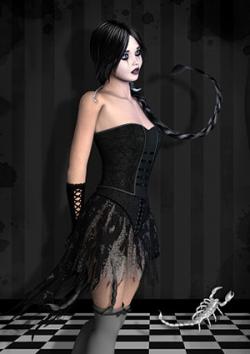 Scorpio requires a strong-willed mate fearless of her power, comfortable with intimacy and willing to navigate emotional storms. If he expects her to change, he'll be disappointed. As a fixed sign she is what she is, so he must accept her for herself. This intense, fiercely protective woman chooses her lovers with care; to her, 'casual sex' is an oxymoron. Her sexuality is potent, transformative and intimate; she goes all the way, merging essences at all levels, emerging transformed and renewed. When she offers herself it is a gift beyond price.

His faith is his lodestone and guide, but as a mutable sign he can adapt to other ways of being. His feelings don't run deeply, but his strong sense of self is not threatened by emotionality. When he loves one, he loves all. Above all he seeks to understand. As the sign that follows Scorpio, the Sagittarius man has spent time in the depths, having incorporated and moved beyond that place. Now, he rises to embrace the light that heals, seeking freedom most of all. For him, personal love is not a goal but a means to explore higher understanding. Groups of smart, open minded individuals feed his soul with entertaining flights of fancy and philosophy. 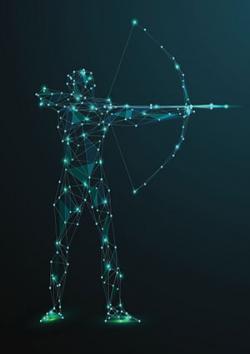 Freedom is his bottom line! This restless soul requires personal sovereignty. Try to control him and see him recede into the distance. Travel, be it physical or intellectual, is an important part of his life. He can commit but he can't be pushed or pressured to get there. His primary relationship is between himself and his God, whether he conceives of it as a divine power, philosophical ideal or universal unity. He follows his own star. An active social scene is essential; the Sagittarius male withers in isolation. He loves new experiences and adventure and is a bit of a thrill seeker. Given new experiences, convivial companions and freedom, he is a pleasure to be around.

On the surface, these two signs don't seem at all compatible; fixed water and mutable fire could not be more different. Yes, there are definitely challenges that have the potential to bring out the worst in both.

The Scorpio woman can be a jealous, possessive soul; her emotions are so powerful and her need to merge sexually means that she can't love without becoming focused on her beloved. He must be everything to her! She is secretly worried that she will lose him, and this is why she can seem so controlling and demanding at times. Unfortunately, Sagittarius requires freedom. The best way to make him run is to try to force him to stay against his will. He cannot tolerate coercion, however subtle, and prides himself on evading it. Almost before she can finish saying, "Who was that woman you were talking to?" the Sagittarian male might begin rethinking his commitment. His friendships, male and female, are sacred, and he treasures his freedom to connect with new people. While naturally honest, if he is treated disrespectfully or coerced in any way, he may see nothing wrong with bending the truth (even out of shape) if that's what it takes to be able to have his cake and eat it too.

The Cycle of Mistrust

The trouble is, Scorpio has a superpower: she has a built in lie detector. If he lies or deceives her, she will know it and become ever more mistrustful, demanding and suspicious. Thus ensues an escalating cycle of mistrust until there is no option left but to end the relationship. In that case he will have to be the one to leave because she will not let go. Her fixed nature will not allow her to give up; she is dogged and obsessive in love. A relationship that begins in heavenly bliss can deteriorate into a hellish power struggle as trust dies between them. If the Sagittarian has any Scorpio in his chart (as they are adjacent signs, he likely does), it may be hard for him to let go as well, but if his relationship becomes a trap, he will punish her with further betrayals and deceit.

The Ant and the Grasshopper

Scorpio is an inveterate pessimist, while Sagittarius automatically sees the bright side first and foremost. This is an ant/grasshopper relationship. She is determined to prevent the disasters she is certain are inevitable, while he prefers to while the day away in talk, play and exploration. This doesn't mean that he is lazy; not at all. He has the bottomless energy of all fire signs and he is happy to work to fulfill his dreams and visions. It's just that he doesn't see the need to chop firewood until it's already cold outside, while she wants to have it stacked and stored in the spring. He buys only the groceries that are needed now, while she is inclined to stockpile enough to survive a disaster. She sees darkness in the hearts of so-called 'good people,' and is prepared for the worst, surprised only by altruism and selfless behavior. He believes that everything will work out and that most folks are good at heart. This can lead to friction, especially if they are invested in trying to convince one another that they are right.

How It Can Work

As adjacent phases of the zodiac, these two signs represent sequential phases of the soul's journey. Adjacent Sun sign relationships can be successful as their differences can be complementary rather than conflictual. Many Scorpio-Sagittarius relationships work quite well, if they can work out the problems.

Scorpio is at home in the darkness but still needs a certain amount of warmth and light. Following Scorpio, Sagittarius is the light that enters the darkness, uplifting, expanding and filling it with meaning. This feels so good to Scorpio! She needs to be accepted without limits or conditions, and he can give her that. A Scorpio woman knows how to take responsibility for her feelings. She knows her lover will hurt her; it is inevitable. Agony is the cost of her capacity for ecstasy. Still, she needs to know her pain is not pointless and her trust is not misplaced.

Scorpio insists on authenticity, the truth even when it hurts. If her man has the courage and heart to be open and honest with her, he can hold his own in the relationship. If he wants freedom, he must take responsibility for owning his freedom and allowing her to be upset about it, if she is. When she demands to know, "Who was that woman you were talking to!" he might say frankly, "That woman is my friend, there is nothing between us. I have always had women as well as men friends," then stay present with her and help her to process her feelings about it. A strong Sagittarian can receive her fears with love, by saying, "I understand that you're scared, it's okay with me that you don't trust me. I know you have been hurt. Nevertheless, I am trustworthy, and I am here for you."

When he is true to himself there is not a deceitful bone in the Sagittarian body, so he can accept her without guilt or rejection. Because she can sense the difference between lies and truth, she will come to know and trust his integrity and therefore to accept his freedom as integral and necessary to who he is, the man she loves. Even if it hurts to be left alone sometimes, she can handle it. She knows how to manage her pain but she cannot stand betrayal or deception.

The key in this relationship is to negotiate appropriate boundaries that work for both partners. The Sagittarian man's need for freedom within the relationship is contingent upon his ability to respect her boundaries, especially sexual ones. She is not okay with sexual infidelity, cheating or lies under any circumstances. Depending on what else she has in her chart, she might even be okay with polyamory, but she needs to know what the boundaries are and to be able to trust that he will absolutely honour them, no matter what. She needs to feel safe, as safe as she can feel given how deep and powerful her sexual and emotional capacity for bonding really is. It will take time and exploration, but it is possible to include their disparate needs within a relationship framework that feeds and supports them both.

More to the Picture

There is more going on in any astrological chart than just the Sun sign. To understand how two individuals relate, all synastry connections (between Ascendants, Moons, Venus, Mars, and more) should be taken into consideration, along with the composite of both charts. Still, you can learn a lot comparing Sun signs. As the massive, central source of light in the solar system, the Sun is boss.

The Best of Both Worlds

This sign combination is capable of an intimate rapport that supports the highest qualities in each other. Scorpio's possessiveness can balance with Sagittarius' will to freedom without conflict when the underlying emotions of fear are encouraged to release and grow trust in their place. When both parties are committed to truth and integrity, the relationship can be deeply fulfilling and even transformational. With patience and care, they can build a substantial and enduring foundation together.