What a Scorpio Man Can Expect

A Scorpio woman is as deep and complex as a Scorpio man, so she will have an innate understanding of and an appreciation for a Scorpio man's complicated nature. He can expect her to take him places psychologically and sexually that no other woman can. But, like him, a Scorpio female has an explosive personality and can erupt like a volcano when she gets mad.

To Win a Scorpio Woman's Heart

A Scorpio Couple in Bed

A Scorpio man and woman are both aggressive, passionate, and generous lovers who will do whatever it takes to please their partners. Their foreplay will be long, edgy, and imaginative, and the act of sex will be a merging of the mind, body, and soul of each. Together, they'll transcend "themselves," enter a state of shared mystical ecstasy, and become one.

A Scorpios Couple in Love

When Scorpios fall in love, they fall deep and feel compelled to express and act on their love. A Scorpio man and woman could go from dating to meeting each other's families to walking down the aisle in the blink of an eye. Scorpio is a water sign, and Scorpios are quiet, outwardly calm, sensitive, and solitary souls, who, like all water signs, need a safe sanctuary. The traditional marriage vows "to have and to hold, from this day forward, for better, for worse, for richer, for poorer, in sickness and in health, to love and to cherish, till death do us part" is exactly what both expect.

A Scorpio Couple at Their Best

If a Scorpio woman returns a Scorpio man's love the intensity of their love, their loyalty to one another and their shared resourcefulness and power can make them a formidable, charismatic, and successful duo and their love for and devotion to one another can ensure that their relationship will be long-lasting.

For Good or Bad

Sadly, this is a relationship that can go two ways, it can be wonderful for both or destructive to both.

Scorpio is ruled by Mars, the warrior planet, which means Scorpios love to fight. Scorpio is also ruled by Pluto, the planet of extremes, which adds ruthlessness to the mix. Now double that. Both are strong-willed and neither shies away from confrontations with the other. In fact, both are enlivened by a good fight and might even start one about anything if life gets dull and unexciting. Of course, this can lead to mind-blowing makeup sex, which is likely to encourage more fighting and emotional drama. 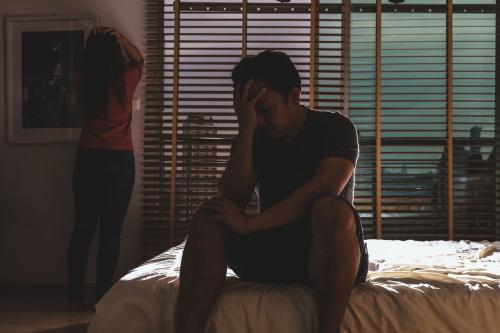 It's their combined fixed natures that can stop both in their tracks, cool the ardor, and set their relationship up for a fall.

This is a couple that needs some separation in their life together. They also need to learn to share what they are feeling with one another before they're swamped with negative emotions, otherwise, their fights are likely to escalate into an endless cold war standoff that not even makeup sex can stop or fix.

The Astrology of Love

Of course, a Scorpio man isn't going to fall in love with every Scorpio woman he meets and every Scorpio man and woman is different, related to the other planetary placements in their birth chart. Plus where love is concerned Venus, the planet of love, and Mars, the planet of sex are both as important as an individual's Sun sign. But if a Scorpio man and woman fall in love, it's best if they both understand and love themselves, dark side and all, because this is a relationship could bring out the best or the worst in each.