An Aries man in bed is as sexually aggressive as they come while a Pisces woman can surrender more deeply than any. What kind of time will Aries men and Pisces women have in bed together? Are they too different to connect well, or can they make beautiful music?

Aries and Pisces Have Different Styles

The End Is the Beginning

Aries and Pisces are adjacent signs, so chances are good either or both of them will have Venus or Mercury in the other's sun sign, which helps to create commonality of style in their hearts and communications. Because Pisces is the final sign and Aries the first in the cycle, they represent the place where the end becomes the beginning. The ouroboros, or serpent eating its own tail, is a symbol for infinity, the endless recycling and regeneration of all that is.

Like all adjacent signs, they feel right and familiar to one another, even through differentness. Their sexual needs, in fact, could not be more different. Fortunately, they can improve their sexual compatibility. When they connect, they become a powerful force for transformation! But it won't be easy as they have some serious challenges to overcome.

The Aries Man Forges Ahead

Cardinal fire is the most primitive phase of existence. It barrels out of the gate, crying, "I exist! I want this! I am going for it! Don't try to stop me!" With exceptions depending on the placement of other planets, signs, and angles, an Aries man is goal-oriented. A pure Aries wants his payoff as quickly as possible. There's not much subtlety innate in this boy, and he remains a boy no matter what age he is. While he can learn, grow, and mature, he will always be youthful in his outlook and energy.

As a water sign, Pisces holds sex in the highest esteem. For her, lovemaking is a way to intermingle essence, to become one with the Divine through the agency of her lover. It is prayer. The vastness of her experience cannot be overstated. To her, sex is sacred, a wholehearted surrender of self into an oceanic oneness. In the throes of passion, there is no difference between herself and the beloved; she is him and he is her, abandoning all boundaries into a formless universe made only of pleasure and the beautiful mingled emotions of herself and her mate.

Aries and Pisces Have Fundamental Differences

Aries does not wish to become anybody but himself! Most Aries men will say, "Sorry, that's not for me." Aries is very different from Pisces. If Aries follows his instincts and approaches sex like a competition or conquest, he will find her as slippery and elusive as a fish. His basic needs are uninteresting to her; she craves romance and magic. If he is to keep this woman in his life (and his bed), he must learn to satisfy her. As a mutable sign, she can adapt to most love styles, but he will have to up his game considerably. 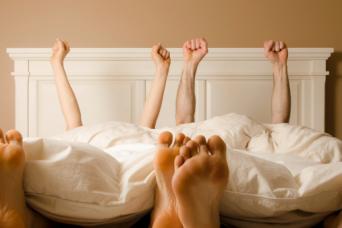 Fortunately, as a cardinal sign, Aries is driven to change and evolve. He will eventually grow tired of driving himself single mindedly forward, banging his head against the same walls. Sooner or later, life will teach him (and nobody else can, so don't try) the rewards of intimacy and connection. The Aries' natural gravitational pull is toward Libra, his earth sign. When his heart opens, he will become sensitive, observe his lover's responses, seek her satisfaction, and be pleasured by her pleasure.

A Pisces woman is magical in bed. Her body flows like water, she shifts, adapts, reflects beautiful mystery with every movement. An Aries male contains a powerful fertilizing force, pure dynamic sexual power. His libido is impulsive, explosive, and very powerful. These two can be amazing in bed together. When the sex is good, it is magnificent. When it is bad, however, it can be traumatic. Aries driving sexual aggression can feel violent to the sensitive Pisces woman, and her desire to please and surrender can be boring to Aries, who craves excitement and challenge, even in bed.

It takes two exceptional lovers to make this relationship sparkle and flame. The fire is there, but it can be destructive if it isn't approached with care and sensitivity. Aries needs to work on personal growth; if he is not willing, then the sex will be all give and no take from the Pisces side.

Not all Aries men are sexual firecrackers. If Mars is in Taurus or Scorpio, for example, he has no difficulty making things last as long as they need to. Premature ejaculation can be an issue for many though. The Aries goal-oriented drive can cause the game to end when the fun has barely begun. The problem is Aries' innate sexual impatience. The MultiOrgasmic Man by Mantak Chia and Douglas Adams can be a game changer for Aries, to teach him how to deepen his sexual stamina and expand his pleasure in the act of lovemaking without making orgasm the target he is aimed at.

It Takes Work, but the Rewards Are Worth It

As a Pisces woman or Aries man, if you are not willing to put in a lot of work on expanding your sexual limits and trying new things in bed, then don't bother trying to make it together. If you want to be with one another and are motivated to grow and explore sexually, the hotness and depth of intimacy that are possible will amaze you. Sparks will fly and the earth will move. The question is, how badly do you want it?