What happens when a hot-headed impulsive Aries initiates an argument with a cool-headed, non-confrontational and reasonable, but stubborn "know it all" Aquarian? An Aries and Aquarian have an easy relationship and may not argue often, but when they do it usually ends in a stalemate where one or the other turns tail and walks away.

How an Aries Argues

An Aries is extremely competitive, hot-headed, and prone to initiate arguments. They also hate losing an argument, never back down and can be unreasonable. Even if they don't know what they're talking about, they don't want to admit they're wrong and always want the last word.

How an Aquarian Argues

Aquarians are typically intellectuals who are friendly, tolerant of others, and non-confrontational. Though they enjoy a friendly debate, they seldom argue. However, they can be stubborn, stand their ground, and dispassionately respond with facts when they do get into an argument, but they are usually reasonable individuals to argue with.

An Aquarian woman deals with the Aries' man's hot temperament without getting upset and tries to engage him in a non-confrontational and reasonable manner by presenting the facts. However, if that doesn't end the disagreement she'll roll her eyes, disengage and calmly walk away.

When an Aquarius man and Aries woman argue, it's likely to end in a stalemate. An Aries woman will become exasperated with an Aquarius man's cool-headed stubbornness, have a final angry word, give up the fight and walk off in a huff.

How to Resolve Aries/Aquarius Arguments 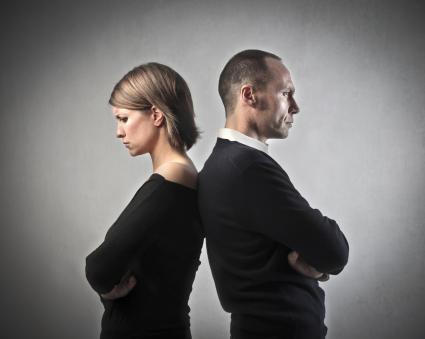 Since both Aries and Aquarius tend to walk away when they can't come to a resolution, the best way to resolve an argument is before it becomes a stalemate or wait a while and come back to it when an Aries passions have cooled, then the more rational Aquarian should listen to what an Aries has to say and validate what they can, before trying to present the facts of their position.

The good news is that an Aries is quick to cool down and respects cold hard facts and logic, and an Aquarian's ability to be dispassionate and reasonable are big pluses when to comes to resolving any conflict that arises between them.

When an Apology Is Needed

More to an Argument Than Sun Signs

Although the Sun sign is very important, there are other astrological factors involved in arguments. Everything in a birth chart refines your Sun sign and gives further definition of how you argue.

The sign on the Ascendant, the rising sign, is especially important when to come to confrontations. As an example, if your rising sign is Libra you appear very friendly and diplomatic, but can be very argumentative.

Arguments are emotional and how you deal with your emotions is found in the sign placement of the Moon. As an example if your Moon is in Sagittarius you can be quarrelsome and loud when angry.

The sign of placement of Mars in your birth chart speaks of how you express your anger and what makes you angry. As an example, an individual with Mars in Taurus can be a tenacious and stubborn when they get into a disagreement.

Mercury's sign placement shows how you communicate. As an example, a person with Mercury in Aries can be as verbally aggressive when challenged.

Your Venus sign placement determines you feel about and react to arguing. As an example, a person with Venus is Pisces will try to avoid arguments.

Aspects made between all the planets to the Moon, Sun, Ascendant, Mars, and other planets and points in your chart will also impact how you handle confrontation, arguments, and heated moments. As an example, an Aries Sun with Mars in Taurus has more staying power than a typical Aries, and an Aries Sun with Mars in Pisces would be less confrontational and more passive than a typical Aries.

A comparison of the aspects of the birth charts of two individuals, Astrological Synastry, can tell you if the two individuals are inclined to argue. As an example if one person's Mars is square the others Mercury the couple should be aware that conversations may often lead to arguments.

Any healthy relationship will have its disagreements and conflicts. It's one of the ways in which you grow and deepen your relationships. The happiness in any relationship does not depend only on how much fun you have together, but also on how quickly you can resolve the inevitable arguments that come up. While there are other astrological factors involved, simply knowing the positive traits of your Sun sign and understanding how other Sun signs operate will give you the possibility of quickly moving through conflict.

0
Comments
© 2006-2020 LoveToKnow, Corp., except where otherwise noted. All Rights Reserved.
Resources, Advice & Tips for Covid-19
Read More
Aries and Aquarius in an Argument