On the surface, a Scorpio and Aquarius friendship may appear to be tough sell. After all, Scorpio is a water sign and Aquarius is an air sign, and the two approach the world in fundamentally different ways. Although the two sun signs are different in almost every way, their steady nature arising from their fixed quadruplicities can turn a successful Scorpio-Aquarius friendship into a force to be reckoned with.

Scorpio and Aquarius have different ways of approaching life and looking at the world. This can lead to a number of challenging aspects in a friendship between Aquarius and Scorpio.

Mars and Pluto Versus Saturn and Uranus

One thing Scorpio and Aquarius do have in common is that they both have two ruling planets. However, the manifestation of the energy of each of those planets creates two very different personalities. Scorpio's ruling planets are Mars and Pluto. Aquarius's ruling planets are Saturn and Uranus. Uranus renders Aquarius a bit flighty and unrealistic. Aquarius is a dreamer and a visionary, and she's extremely social thanks to the influence of her ruling planets. Likewise, Mars and Pluto render Scorpio deeply pragmatic and introverted. This imbalance between Aquarius's extreme sociability and Scorpio's extreme introversion can definitely be a challenge that may make friendship difficult, although not impossible. Aquarius can bring Scorpio out of his self-imposed shell, while Scorpio can ground Aquarius and help her be more focused in her approach to life.

Water signs are emotionally driven while air signs are intellectually driven. And often, Scorpio's penchant for deep emotions can baffle Aquarius, who leads with his mind. In terms of astrological compatibility, air signs are often the most compatible with other air signs and fire signs and least compatible with water and earth signs. So, from an elemental standpoint, Scorpio is fundamentally incompatible with Aquarius. And Aquarius's airy demeanor can ruffle Scorpio's deep emotions, bringing them to the surface. This can be a good thing because it helps Scorpio to express and release those emotions instead of burying them deeply and allowing them to fester. Of course, this can also result in outward displays of Scorpio's notorious anger, which may baffle the less temperamental Aquarius. 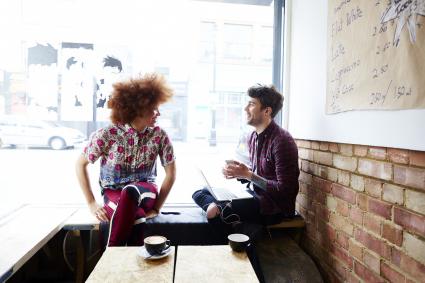 Free Spirited and Quirky Versus Broody and Intense

If you know someone broody and intense, chances are she's a Scorpio. And broody and intense is attractive to many sun signs, just not Aquarius. Aquarius is the zodiac's most quirky character. He's a free spirit. Scorpios are steadfast, and they like predictability. Meanwhile, Aquarius is the most unpredictable sun sign around. This can be a fundamental incompatibility between friends, but it can also challenge each to step out of their comfort zone and grow.

Scorpio personalities tend to be quite jealous and possessive of their relationships and friendships. This may not bode well for a Scorpio-Aquarius friendship, because Aquarius is the most independent sun sign. Aquarius likes to have her space to do what she wants, when she wants, the way she wants. This can be a threat to possessive Scorpio, who may seek to exert control in the friendship in order to bring it back into her comfort zone. And independent Aquarius won't get what all the fuss is about. She'll chafe under Scorpio's possessive and controlling nature unless the two can find a way to understand each other's needs and viewpoints within the friendship.

One of the most similar aspects between Scorpio and Aquarius is their fixed quadruplicity. Both are steady and stable, which can be a challenge if they work at cross-purposes. However, when they decide to join forces and work towards a common goal, this duo is virtually unbeatable as they both become dogged in their pursuit. There are a few other compatible aspects between Scorpio and Aquarius as well.

Both Scorpio and Aquarius tend to be intelligent, and in friendship, each may find the other intellectually stimulating. This can keep the friendship dynamic as each respects the other's intelligence.

Both Aquarius and Scorpio will keep the friendship endlessly interesting, mostly because they are so different from one another. This can be an exciting friendship for both participants if they find ways to work with their differences instead of chafing against them.

When two opposites come together, if both are willing to work on communication, the friendship can bring out the best in each. Scorpio could stand to be a little lighter, while Aquarius could definitely use some help with becoming more grounded and mature. For those willing to make the effort, the Scorpio-Aquarius friendship can help each bring out aspects on the other that will benefit them both within the friendship and in life.

Scorpio and Aquarius have very different communication styles, drives, and personalities, but that doesn't mean they can't be friends. Other aspects of the natal chart will help to bring some balance to each of these sun signs, so compatibility often changes based on the entire chart. If the friendship is important enough to both participants, it can be satisfying for both Scorpio and Aquarius. However, each will need to adapt his communication style and be willing to hear what the other has to say in order to develop a strong and stable friendship.