Chiron was discovered in November 1977. When new heavenly bodies are found, astrologers look to several things to decipher what it could mean in an astrological chart. Two of these are cultural changes in the years surrounding the discovery and the myth surrounding the mythological character for which the newly discovered body was named. Chiron has come to represent your deepest wounds, as well as your journey from fragmentation to wholeness.

Though the inner child movement began in the 1960s, it didn't gain much recognition until just after the discovery of Chiron. This was when the importance of healing the wounded child became part of the fast-growing recovery movement. Of course, in the 21st Century, you might think all of this is just common sense, and something was always known. Still, when Chiron was discovered, such theories were revolutionary.

Chiron, a seemingly minor but critically important mythological character, was the grandson of Uranus and Gaia. He was born of the illicit union between Chronos (Saturn) and the sea nymph, Phllyra. He was half-sibling to all the Olympian gods; Zeus, Hades, Poseidon, Hera, Demeter, and Hestia. If you've read any of the myths, you know that Chiron was born into the archetypical dysfunctional family.

It is said that Chronos came to earth and upon seeing the beauty of Phllyra, lusted after her. However, Phllyre didn't welcome Chrono's' advances and attempted to escape by changing herself into a mare and galloping away. Not to be detoured, Chronos transforms himself into a stallion, galloped after Phllyra, caught up with her, and raped her. Chiron was conceived during a rape, and then promptly deserted by his father.

Ravaged and deserted by Chronos, Phllyra went on to give birth to Chiron, the Centaur. However, upon seeing her newborn son, she became hysterical. She cried out to the gods to be anything but the mother of this defective, mutant, and half-breed child. The gods granted her wish and turned her into a linden tree. Infant Chiron, unloved and unwanted by his mother, was then taken to the top of Mt. Pelion and abandoned to the elements, as was the custom in ancient Greece when a defective child was born. However, Chiron was the son of a god and, therefore, immortal. Additionally, he was half horse, and like all horses, Chiron could stand on his own shortly after birth.

How did Chiron, a defective but divine child who had been wounded and scarred emotionally by the trauma of his conception and birth, absentee father, and rejecting mother, become the knowledgeable teacher and kind mentor in so many different disciplines? Chiron came under the protection of the god Apollo and his twin sister, the goddess Artemis very early in his life.

Artemis is the protectress of the unborn and infants; as guardian of infants, she teaches them to be independent and authentic to themselves. Artemis is also the protectress of the forest, the provider of medical herbs, protects the rivers, the wind, and demands respect for nature and nature's way. She is a virgin goddess of the wild, a huntress skilled with the ways of the forest and famous for her ferocity.

Apollo, the twin brother of Artemis, is the patron of almost everything associated with the advancement of civilization. He is not only a god of the Sun but also the god of poetry, music, prophecy, archery, medicine, youthful beauty, law, and philosophy. Apollo is also a master at musical instruments, composition, and the setting of lyrics to his music. This made him the special patron of the Muses. The Muses inspire all artistic endeavors and wisdom.

Raised by his dual divine mentor/teachers, Chiron grew to be very wise. Stories about his great wisdom spread far and wide. Various gods and high-ranking mortals brought their children to him to be educated. So, Chiron, when grown, became a healer as well as the mentor, teacher, and foster parent to the sons of kings and many of the most famous Greek heroes, including Jason, Asclepius. Achilles and Hercules.

Chiron orbits between Saturn and Uranus. Saturn represents limitations and the past. It's the last of the series of planets which are material, physical, and linear based. Uranus is the future that challenges and breaks free from Saturn's limitations. Chiron is the bridge from the material world to the transcendental realm of the planets Uranus, Neptune, and Pluto. The glyph for Chiron looks like a key because Chiron represents the key to becoming more spiritually embodied. 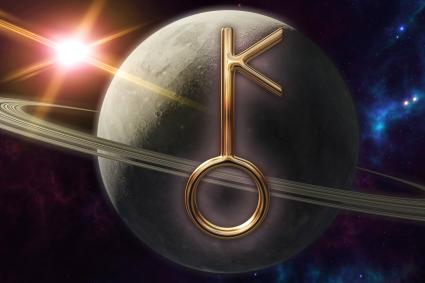 Chiron in Your Birth Chart

You can find Chiron in your birth chart at Astro Seek.

Chiron Through the Signs

Chiron takes about 50 years to circle the entire zodiac, and it spends about four years in each sign, meaning everyone born during these four-year periods has Chiron in the same sign. For the context of how Chiron will manifest in your life, you'll need to consider the house Chiron occupies and the aspects it makes. Basically, Chiron represents the deep-rooted trauma and programming that you accumulate during the first 7 years of life.

An individual with Chiron in Aries had their self-confidence wounded early in life and as a result, they fear to be assertive for fear of rejection. They may also be learning to deal with anger and trauma from past physical injuries, which could literally be head wounds.

An individual with Chiron in Taurus has self-worth issues and may have experienced rejection as a child for being too slow or methodical. They might also have felt disenfranchised and deprived of a comfortable life.

An individual with Chiron in Gemini may have been wounded as a child by others misinterpreting their words or outright judging or saying they don't know what they're talking about. It can also suggest learning or speaking disabilities.

Individuals with Chiron in Cancer may have not had their feelings validated or their needs met as a child. It also suggests they grew up in a dysfunctional family.

Individuals with Chiron in Leo may not have been allowed to express their creative side and play as a child. It could also suggest that as a child their creative playful side was either put down or ignored.

Chiron in Virgo suggests that there were parental figures who demanded perfection and as a child, they feared rejection for not being perfect. As a result, they're wired to believe they are not lovable if they aren't perfect.

Chiron in Libra suggests that as a child, the individual may not have been treated fairly and was raised to believe that the wants and needs of others always come before their own.

With Chiron in Scorpio, the individual has significant trust issues. Perhaps as a child, boundaries were crossed, their trust was violated, and as a result, they don't trust anyone.

With Chiron in Sagittarius, as a child, parental figures probably rejected these individual's big ideas and imagination and didn't believe they were worthy of consideration. As a result, they rely on others for answers and are fearful of striking out on their own.

With Chiron in Capricorn, you may have been told and shown that you and your work are not good enough when young. As a result, you now feel unrecognized, unappreciated, unnoticed and unheard and incompetent.

Chiron in Aquarius suggests that you were made to feel like an outsider who was different from everyone else in the family. As a result, the person came to believe there was something wrong with them and as an adult may still isolate themselves from others.

Chiron in Pisces suggests that as a child, you experienced a deep sense of betrayal and victimization that resulted in a loss of faith and trust in the divine, as well as a belief in a loving universe.

How Chironic Are You?

Wounds heal even emotional wounds. However, if the wounds are deep enough, they leave scars as constant reminders. Just because everyone has Chiron in their birth chart, doesn't mean everyone is Chironic. If you want to know just how Chironic you are, Joyce Mason, an astrologer who has studied Chiron extensively, has designed some quizzes for just that. Follow the links below to find out how strong your Chiron is and to take the Chiron resonance Quiz.

It's a monumental day when you turn 50 for more reasons than one. At the age of 50-51, you experience the return of transiting Chiron to the location it occupied at your birth, this is called your Chiron return. This usually lasts about a year and can be a significant evolutionary period. When you reach your Chiron return, it's an opportunity to move upwards in your spiritual growth. If you have done a lot of healing spiritually before your Chiron return, whether intentional or not, it could be a more natural leap. If not, then there can be issues that come up, such as illness or some type of crisis. If so, then the purpose is to influence the way you see your life and help you make decisions that liberate and heal you from past emotional wounds.

If you're Chironic, dealing with Chiron is never easy. To paraphrase Nietzsche, what doesn't kill you, makes you stronger. Chiron speaks of childhood trauma that can result from anything that disrupts a child's sense of self and safety. Fear and a sense of helplessness can carry over into adulthood if the wounds of childhood are not resolved. On a more positive note, once the emotional wound is healed, Chiron becomes the archetype of the experienced and wise wounded healer.

1
Comments
© 2006-2020 LoveToKnow, Corp., except where otherwise noted. All Rights Reserved.
Chiron in Astrology and Its Meaning in Your Chart