Aries is the Ram, and its ruling planet is Mars. Mars is a malefic planet, which means that it brings many challenges to the houses and signs it rules. However, the challenges Mars presents as it rules Aries also provide plenty of opportunity for Aries, the first sign of the Zodiac and a cardinal fire sign, to grow and evolve.

Mars is named for the God of War, also called Ares in mythology. Mars brings active, passionate, masculine energy (yang energy) to Aries, a sign which, by nature is already fiery, passionate, and often aggressive and feisty due to the influence of the Aries's fire element and its cardinal quadruplicity. As Mars rules Aries, it sets the tone for the types of challenges Aries will face throughout her life by serving as the zodiac sign's primary influence.

Mars is the planet of war, and the drives it inspire are aggressive and often seemingly testosterone-fueled. This imparts many of Aries's characteristic traits.

Aries can be quite aggressive when it comes to getting what he wants; he's notorious for putting his head down and ramming his desires through any resistance. Mars has a significant influence in this with the masculine, yang energy it brings to the zodiac sign. Aries Mars-fueled aggressiveness can be out of balance, leading to a winning at all costs, me first attitude, or it can be more balanced in such a way that the aggression becomes determination that uplifts everyone by creating win-win solutions for success, whether in business, relationships, or other aspects of life.

Both the fire element and the ruling planet Mars contribute to Aries's passionate sexuality. Since Mars as a ruling planet drips with testosterone, both male and female Aries are often overtly sexual and in pursuit of sexual conquest. This can make Aries seem highly seductive to others; she's seldom at a loss for sexual partners. When appropriately channeled, this overt sexuality and passionate sexual drive can be a boon for both Aries and her partners. She's an enthusiastic and fiery lover. Out of balance, Aries's Mars-fueled sexual energy can be overwhelming, unwelcome, and aggressive.

Mars's influence on Aries can also render him quite the hothead. His anger may seem to come out of nowhere, but Aries is also really good at getting it out and letting it go, which is what an in balance Aries does. To help balance his quick temper, Aries can learn about his triggers and develop coping skills to help keep it from exploding. Some things may be more triggering to Aries than others, including betrayal, someone attempting to control him, or feeling disrespected.

As the first sign of the Zodiac and a cardinal sign, Aries is already a natural self-starter, but the aggressive energy of Mars as a ruling planet compounds this and makes it exponentially stronger. And while Aries is good at getting started, she may not be as great at finishing as Mars's testosterone-fueled energy quickly turns her head to another big idea or project. Therefore, while starting projects is almost never an issue, Aries needs to cultivate practices and techniques that help her follow them through to the finish line. Alternatively, she may need to learn to delegate or lead a team and trust that they will carry her ideas to fruition.

Mars's influence also provides Aries with a great deal of courage. Aries is not afraid to take on a challenge. In fact, he revels in challenges and will battle courageously for what he believes is right or for what he wants. In fact, Aries can be so courageous, he may appear foolish or impulsive to other, more cautious signs. However, with big risk can come big reward, and a balanced Aries can capitalize on this trait by pairing his courage with his determination to make big things happen.

Balancing the Effect of Mars in Aries 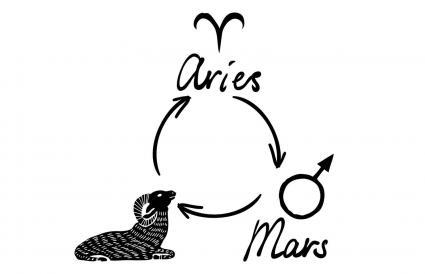 Develop strategies for dealing with anger when it arises. Breathing techniques such as stepping back, closing your eyes, and taking three or four deep breaths before exploding in anger is a simple technique that may work wonders to help balance this aspect created by Mars's influence on Aries.

Since Aries has more starting energy than finishing energy, he needs to create structured goals that keep things feeling fresh and new. Chunking them into small, easy to achieve mini-goals and being willing to adapt them to suit new ideas can help keep Aries in the game. If follow-through isn't his strong suit, then Aries can hire or delegate a team to help you carry his plans through to completion.

There's nothing wrong with engaging in sexual pursuit. However, Aries can also learn to channel her sexual energy into creative energy - the two are quite similar. Instead of becoming aggressive about seducing sexual partners, Aries can try engaging in a creative process such as goal-setting, planning, or creative visualization. This can help set fire to his goals, or it may drive Aries in directions he never imagined he could take.

Aries burns hot with the energy of fire and Mars, so he needs movement practices that are restorative in nature. Gentle, restorative yoga and slow-moving qigong may feel frustrating for aggressive, active Aries, but it can bring much needed physical and energetic balance and restoration to always on-the-go Aries.

The combination of the fire element and Mars in Aries build on one another, creating an aggressive and courageous energy that can lead Aries to high highs and low lows. The trick in managing the challenges inherent with Mars as a ruling planet of fire sign Aries is to cultivate balanced energies so Aries's traits can have their most positive expression.