Sagittarians are humorists who see the funny side of life and try to find deeper meaning in their emotional trials, but for a Sagittarius, expressing feelings can be a challenge. You might even call them "Pollyanna" because they seem almost to refuse to see the downside of any situation and quickly solve many of their more problematic emotions with laughter.

Sagittarius' Emotions and the Sun and Moon

In astrology, the Sun dictates your personality, while the astrological Moon represents your emotional nature. However, the Moon reflects the light of the Sun, and the two together strongly influence your emotional mode of operation. A Sagittarian's Moon can be in any of the 12 astrological signs but whatever sign a Sagittarian's Moon is in, they will to a greater or lesser degree express what they are feeling openly and honestly and try to see the bigger picture.

Sagittarius is ruled by Jupiter, the planet that expands and magnifies whatever it touches, and that includes a Sagittarian's emotional expression. This rulership makes it unlikely you'll ever have to guess what a Sagittarian is feeling.

Sagittarius is a mutable fire sign. A fire sign's emotions are primitive, simple, uncomplicated, and direct. This means Sagittarians tend to be outwardly emotionally expressive and verbal, as well as colorful and dramatic. However, because they are also mutable, you can bet that no matter how magnified their pain or anger is at the moment, they'll soon move onto to something more pleasant.

Sagittarius is also an outgoing, active masculine sign. So, Sagittarian energy is better suited and more accepted in a male. Nonetheless, a Sagittarius woman will also be outwardly emotionally expressive. When she's happy, everyone will know she's happy. When she's sad or heartbroken, she'll shed more tears and make a greater display of her sadness than a man but when hurt or angry, she'll be subtler and less verbally volatile than her male counterpart. However, both male and female Sagittarians don't hold on to their hurt feelings or anger for long and will soon return to their naturally optimistic self and move on to something more uplifting.

Few individuals express happiness and joy quite like a Sagittarian. Sagittarians are just naturally happy people who always seem to see the bright side of things. So when they have a truly joyful experience, their happy temperament becomes magnified, they feel bliss, and they'll share their euphoria with everyone they meet.

Sagittarians love the thrill and excitement of being in love. They are romantic idealists who physically show and verbalize their affections and are overwhelmingly sweet. Sagittarians have many friends, but if they have a particular affection or love for you, you'll never have to guess because they're certain to both tell you and show you.

Sagittarians deal with any sadness or heartbreak in an intellectual, philosophical, or spiritual way and try to find greater meaning in the trials of life.

Sagittarians have no problem expressing happiness and joy, but often conceal their sadness and heartbreak from most of the world, choosing only to share what's bothering them with a few trusted friends. Female Sagittarians have an easier time showing their heartbreak and revealing it to others, but regardless of gender, most Sagittarians "emotionally detach" from any sort of pain or heartbreak. Sagittarians hide what they're feeling underneath smiles and distractions and want to be left alone so they gain understanding and find some greater meaning for what they are feeling.

Sagittarians don't often hold grudges and seldom let sadness or heartbreak hold their optimistic nature down. They forgive and get over things easily. Yet, they may never feel the same about the person again and could just cut them out of their life. They rarely brood or dwell on any sadness for very long, preferring to leave painful memories behind and move happily on with their lives. However, a darker side of Sagittarius is schadenfreude, so, they're often chuckling to themselves when someone who has done them wrong is down on their luck.

When angry, male Sagittarians verbally flare-up, shout, stamp their feet, and steamroll any person who goes to war with them, then laugh about it when it's over. A female Sagittarian is more likely to channel her anger into restlessness, irritability, sarcastic wit, snide comments, or hurtful words.

Are you InTheKnow?
Sign up for our newsletter featuring all the latest stories and products we love.

However, male or female, you can be sure that when a Sagittarian is angry, everyone knows it. But, like with other more unpleasant emotions, both will quickly move away from their anger, usually ignoring the object of their ire or giving them the silent treatment, at least for a while.

Life is all about action and adventure for a Sagittarian. They find playing with danger can be immensely exciting. The typical Sagittarian is an adrenalin junkie who fears nothing and, at times, may even seem attracted to thrills and chills. They thrive on surprise or shock and often "rush in where angels fear to tread."

Dealing With the Painful Emotions of Others

Sagittarians are not touching, feeling, empathetic comforters, they are talkers who comfort others by: 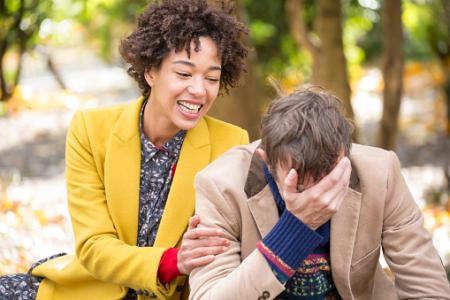 The characteristics of a Sagittarian's emotional expression described above can and will be modified by planets that aspect the Sun and by the sign placement of Jupiter, the ruling planet of Sagittarius. For example:

Every Sagittarian's emotional expression varies and is a combination of many astrological factors. Still, you can be sure every Sagittarian is a person whose primary mission in life is to experience all the joy and happiness it has to offer.

Sagittarians are not emotional, moody people; they are positive, optimistic, and emotionally exuberant individuals who believe that no matter what has happened, something is to be learned by the experience, and good is always just around the corner.

Trending on LoveToKnow
8 Strong Signs a Sagittarius Man Likes You
Sagittarian men are said to be the bachelors of the zodiac. They are friendly and flirty guys who have a lot of admirers and like to spread themselves around. This makes it hard to figure out if a
Keep Reading
Gemini Compatibility and Best Matches for Love
If you're a person who's smart, clever, independent, self-sufficient, and doesn't need to be in control, Gemini may be your soulmate. Gemini is compatible with several signs, including Aries, Leo,
Keep Reading
Tips for Dating a Capricorn Male (& What to Expect)
Slow and steady is the way to go when dating a Capricorn man.
Keep Reading
15 Best Capricorn Career Choices
For Capricorn, a day without work is like a day without sunshine.
Keep Reading
Capricorn and Gemini as a Love Match
Pairing Capricorn and Gemini is like pairing up Yoda with Tinker Bell.
Keep Reading
Capricorn Men With Cancer Women - Are They a Match?
When Capricorn and Cancer get together, there's sizzling chemistry.
Keep Reading
Capricorn Colors That Bring Good Luck and Power
Use your good luck and power shades in all aspects of your life for an extra boost of good fortune.
Keep Reading
Pisces Man and a Capricorn Woman: Are They Compatible?
Magic happens when a Pisces man and a Capricorn woman fall in love.
Keep Reading
© 2023 LoveToKnow Media. All rights reserved.
Are you InTheKnow?
Sign up for our newsletter featuring all the latest stories and products we love.
How Does Sagittarius Express Emotions?