Twins have always been a bit of a thorny issue for astrology. Skeptics say twins are proof that astrology doesn't work. Students of astrology want to understand how natal astrology works when two people have nearly identical birth charts. For astrologers and developmental psychologists, twins are living laboratories that give clues to differences in human behavior.

Unless the birth is cesarean, twins are not likely to have absolutely identical birth charts. The chart of each depends on the amount of time that passes between the first and second birth. The sky does not stop moving the moment the first is twin is born, and some astrological placements move rather quickly.

A Few Minutes Can Make a Big Difference

The rising sign moves about one degree every four minutes, and there's an entirely new sign on the Ascendant about every two hours.

The Structure of the Birth Chart

The Same but Different

Twins always share a special bond, but they're individuals and will carve out their own niche. There's a natural instinct to differentiate one's self that unconsciously motivates each to choose a different expression of a planetary sign placement than their twin. Each of the 12 signs has a range of expression, so exact same sign placements can manifest differently. Twins are prone to each use their shared planets in signs placements in their own unique way. For instance: Twins with fifth house Pisces Suns are both creative individuals, but one might dedicate their life to music, while the other dedicates theirs to saving children.

The Same Transits but Different Experiences

Astrological transits can also manifest differently. As an example, suppose twins had the Lunar South Node at 7° Aquarius and transiting Mercury stationed retrograde on that degree. One twin might attend a meditation retreat during the retrograde and have a major mental breakthrough, while the other might have a mental breakdown and wind up in the psych ward. Same energy, but obviously different results.

Scientific studies of twins reveal the twins who are raised apart are more alike than those that are raised together. Why? Because when twins are raised together, the need for individuation results in the dominant aspect configurations (representing the psychological issues and conflicts in each) being split between the two twins. This splitting can be seen in the lives of celebrity twins Mary-Kate and Ashley Olsen, who were born two minutes apart. 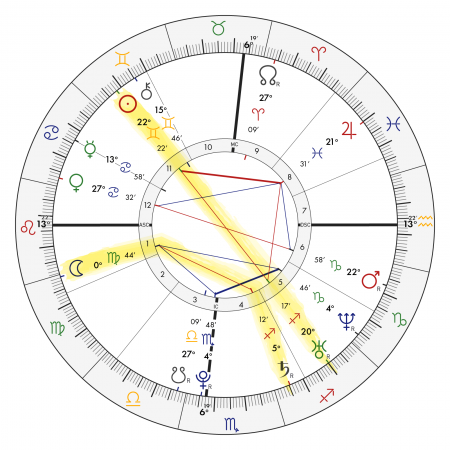 Born only two minutes apart, for all intents and purposes, Ashley and Mary Kate share the same birth chart. Both have the Sun in Gemini (☉♊︎) opposite Uranus in Sagittarius (♅♐︎), but also the Moon in Virgo (☽♍︎) square Saturn in Sagittarius (♄♐︎). In childhood, these aspects combine to suggests a child who had to grow up prematurely and assume adult-like responsibilities, as well as handle an unusual amount of freedom and behave in unconventional ways.

In Mary Kate and Ashley's twinship, these two significant aspects of their personalities were split. Mary Kate assumed the role of the more outgoing, rebellious, quirky and bohemian (Sun/Uranus) twin, while Ashley assumed the part of the shyer, more serious, emotional, and conservative (Moon/Saturn) twin.

The Importance of Experience

In the language of astrology, age seven is a child's first Saturn square (a child's first Saturn square is a time of awareness of the independent self.) The twin's experience on the set of Full House was a formative (Saturn) experience that reinforced the split. Why? Producers noticed this split and Mary Kate was given Michelle's funnier scenes, while Ashley was given Michelle's more serious moments. Even today Mary Kate has a more controversial style (Uranus opposite Sun), while Ashley is more conservative (Moon square Saturn.)

In 2005 mainstream genetics research found that identical twins differ in how their genes "express themselves." Then, in 2008-2009, geneticists discovered that identical twins, despite having very similar DNA, inevitably respond differently to the same environmental stimuli. All of this really just confirms what astrologers have always known; no one, not even those with identical birth charts, lives out their charts in precisely the same way.