If you're a 21st Century career woman who also wants a home and family, a Cancer man is a good choice. He's a family first man who loves children and is attached to the idea of being happily married forever. However, he's also a moody, sensitive guy who needs a lot of huggy, kissy, touchy attention from his wife in order to feel happy and secure in a marriage.

Cancer is the cardinal (active) water (emotions) sign that is ruled by the Moon (mother). A Cancer man is a sensitive, shy, emotional person that's obsessed with security and doesn't trust easily. His greatest need in life is to feel the security of home and family.

Living With a Cancer Husband

There's no man who can be more empathic, protective, and genuinely devoted to their partner than a Cancer husband. At his best, he's deeply romantic and sentimental and will cherish his wife in ways that form the basis of a loving marriage.

His greatest joy in life is in providing a warm, nurturing home environment for both his wife and his children. He's a Mr. Mom type who loves to cook and putter around the house, and he has no problem taking care of the kids. But he's a hands-on guy who can be a bit bossy when it comes to caring for home and family. In fact, he's likely to believe no one, not even his wife, can do it better than he can.

In short, he's a masculine man with a strong maternal instinct, but a man who also needs reassurance from a woman to truly shine.

Not Always Easy to Live With

However, even with all his positive husbandly qualities, a Cancer mate is not an easy man with whom to live. He's often moody, temperamental, and uncommunicative. He can be whiny, evasive, and indirect when questioned; sulky and crabby one minute and effusively sentimental the next.

A Cancer man needs a wife who can who can read and empathize with his moods. He's also a guy that longs to be cared for and nurtured, which means that for him to feel happy and secure in marriage, his wife must give him lots of attention and understanding.

Cancer Men and Their Mom

When you marry a Cancer man, you marry his family, especially his mom. Good or bad, whatever a Cancer man's relationship is or has been with his mother, it's going to be significant for his wife. If he had a wonderful relationship with his mother, he wants a wife who can fill mom's shoes who will also love his mom as much as he does. On the other hand, if he had a rough relationship with his mom, he'll likely need a more than average amount of mothering from his wife to make up for that perfect, nurturing mother figure he never had.

Any guy who loves kids always makes a good father. A Cancer man, who loves his kids more than life itself, is a daddy extraordinaire. This is a father who takes great pride in his parenting and doesn't want to miss a moment of his children's lives.

On the other hand, he can also go a bit overboard and become an overprotective and interfering "mother hen." A Cancer father often relates better to his children when they are younger, more demonstratively loving, and more easily controlled.

A Cancer man's primary focus in life is to find that certain someone he can put down permanent roots with and start a family. So, if his strong needs for emotional and domestic security are met, he'll rarely stray from home and family. Once committed to marriage, this is a man who is capable of enduring loyaly. He will think long and hard before he'd stray or break up his marriage, no matter how rough the marriage becomes.

The Cancer man tends to hoard and to be very careful with his money. His primary concern centers upon providing financial security for his family, and as a result, he is likely to be somewhat tight-fisted when it comes to financial matters.

He's a man who will keep his family financially sound and out of serious debt and will seek consultation from his wife on all major financial decisions. The Cancer man is not impulsive when it comes to spending and wants to have all contingencies covered. He'll do his best to make sure that enough money is set aside for financial emergencies and a secure retirement.

Retirement: It's a Family Affair 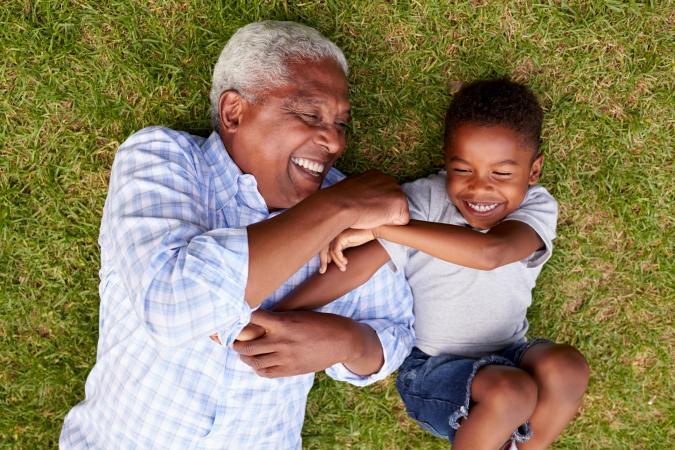 For a Cancer man, retirement does not mean traveling, moving to a fun retirement community, or even into a smaller home. It means staying put in the home where his children were raised so there will be room enough for the kids and grandkids to visit. He wants a place the entire clan can call home where they feel comfortable and are welcome to stay as long as they like.

The super dad is now the super grandpa who loves to cook for, take care of, play with, and guide his grandkids.

It is always important to remember that everyone is so much more than their Sun sign. Every Cancer husband will be unique in his own special way. Plus, any significant placements in Cancer can bring out the caregiver, mothering aspect in a husband. There's also the rising sign, and the Moon sign and the signs of both Venus and Mars to consider. Likewise, some Cancer Sun signs are conflicted and challenged. Sun signs are fun and very relevant but defining a person by their Sun sign only can often be misleading.

A Cancer man is the perfect 21st century husband and father. He's a masculine man, a baseball fanatic who can cook, clean house, hook up a DVD player, and diaper a newborn. While a Cancer husband of previous generations might have seemed to be shattering the traditional norms of home and family, the Cancer husband's time has now come. A Cancer man would happily leave his job and slip into the traditional wife-mother role in the family if his spouse had a financially rewarding career.

Comments
© 2006-2021 LoveToKnow, Corp., except where otherwise noted. All Rights Reserved.
Does a Cancer Man Make a Good Husband?