The Aries-Taurus Cusp is called the "Cusp of Power." However, as awesome as being powerful might sound, with power comes control issues and conflicts. None the less when an Aries-Taurus cusp individual puts their mind and heart to an undertaking, they ram into it with the unstoppable power of a bull.

The Aries-Taurus cusp dates vary from source to source, but often those with birthdays between April 19 to April 21 were born on this cusp. However, because the Sun changes signs on different dates and times each year, you'll need to have a timed birth chart calculated. If your Sun in your birth chart is on the last three degrees (27, 28, or 29 degrees) of Aries, you were born on the Aries-Taurus cusp.

Aries is the initiator of the zodiac who instinctively rushes in and attacks life straight on. They are hard-working go-getters who won't take "no" for an answer. Taurus is all about satisfaction, accumulation of material possessions, and protecting what they earn or accumulate. An Aries born when the Sun was on the verge of entering Taurus has a more cautious and acquisitive approach to life than a typical Aries. Aries-Taurus cuspers are powerful individuals who take the "bull by the horns," plow their way through any of life's difficulties, and come out winners. 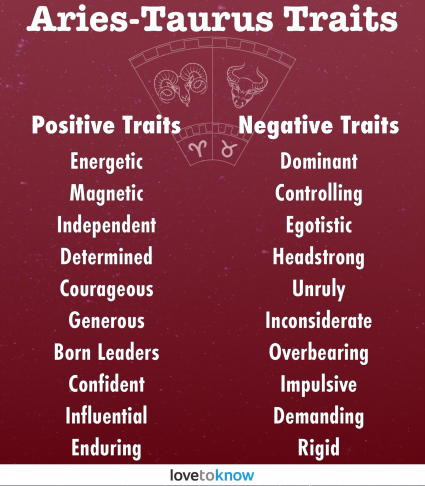 Mars, Venus, and Jupiter color the personality traits of an Aries-Taurus. Ruled by Mars, the planet of war, and supported by Venus, the planet of pleasure and Jupiter, the benefic planet of abundance and excess. Aries-Taurus cuspers are natural-born charmers who have big dreams, goals, and aspirations. They are popular and often lucky individuals who confidently take the initiative, lead, and inspire others. They are also unrepentant lovers of the "good life."

Cardinal signs are about moving forward. Aries, the Cardinal Fire sign, has a childlike spark of exuberance and seldom considers consequences. Fixed signs are about acquiring and maintaining. Taurus, the Fixed Earth sign, is slow, cautious, thoughtful, and deliberate. Aries-Taurus individuals have the fierceness and willfulness of Aries, supported by Taurus' practicality, strategic planning, and endurance. This mix creates an authoritative and assertive individual who can stay the course and find a way to achieve whatever they set their mind to do.

Aries-Taurus are fighters and lovers. Now imagine their love and war plight when it comes to relationships. As long as they are seen as powerful and have ultimate control, they're generous, nurturing, loving, protective, and place great value on the person they love. This means they're best matched with an individual who is meek, tamable, and down-to-earth. Gentle, quiet, dutiful, devoted, and earthy Virgos seem to fit the bill best. Plus, Virgos are not competitive and have the ability to reason. 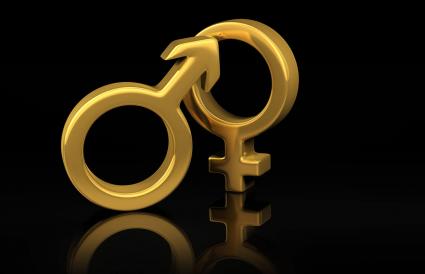 Born on April 19, 1968, with her Sun at 29°51 Aries, Ashley Judd is an excellent example of an Aries-Taurus cusp individual. In her films Ashley often portrays women that are perfect examples of her own Aries-Taurus mental and physical agility, endurance, tenacity, and strength of will.

Other celebrities born on the Aries-Taurus cusp are:

Born on a Cusp

Some astrologers use cusps, and some don't. Still, the progressed Sun provides some logic for using cusps. The progressed Sun moves one degree forward in a birth chart every year. An Aries born on the threshold of Taurus will, from a very young age (0-3 years old), begin integrating some bull-like traits and qualities of Taurus into their budding Aries personality. Although Aries personality traits will always dominate, late term Aries will, over time, become a bit bullish.