Those born on the Aquarius-Pisces cusp are Aquarians who have stepped into the watery, elusive, and oceanic world of Pisces. An Aquarius-Pisces individual's actions are guided by ingenuity, curiosity, and imagination.

The Sun transits Aquarius from approximately January 21 to February 20. Generally, if you were born from February 17 through 20, you're an Aquarian born on the Aquarius-Pisces cusp. However, to know for sure, you'll need to calculate your timed birth chart. If your Sun is on the 27th, 28th, or 29th degree of Aquarius, you were born on the Aquarius-Pisces cusp.

The Aquarius-Pisces cusp is where the visionary, futuristic, high-tech Fixed Air sign of the zodiac meets the emotionally sensitive, mystical, and slippery Mutable Water sign of the zodiac. This is where left-brain logic meets right-brain imagination. This is the cusp that joins Aquarius' intellectual objectivity with Pisces' silent oceanic realm in which everything is connected, and reality is magical, mysterious, hazy, and sometimes scary.

The Cusp of Sensitivity

The Aquarius-Pisces cusp is said to be the cusp of sensitivity. If you were born on this cusp, you are more emotionally sensitive, romantic, and compassionate than most Aquarians. You could be inclined towards the arts, in one form or another, or have a high spiritual nature. On the other hand, you could simply be an unconventional or clandestine individual.

Those born on the Aquarius-Pisces cusp are influenced by Uranus, the ruler of Aquarius, and Neptune, the ruler of Pisces. However, because they were born when the Sun was on the last degrees of Aquarius, they were born in the third decan of Aquarius. This is the Libra decan ruled by the planet, Venus. Uranus, Neptune, and Venus together create a magnetic, intriguing, and dynamic individual who can shock-and-awe others. For some observers, the "awe" is wonderment mixed with fear. For others, it is reverential respect and admiration. However, due to these planetary influences, Aquarius-Pisces are prone to transcend the limits of reality.

This cusp often creates Aquarians who are uncharacteristically emotionally reactive. Aquarius-Pisces are free-spirited and imaginative individuals who love to test the limits and boundaries of what was, is, and could be. 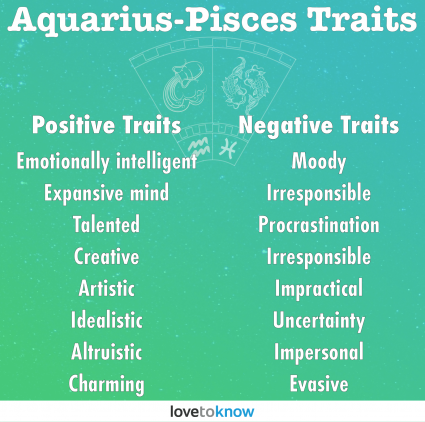 They are dreamers and thinkers who can dream up plenty of great ideas. Unfortunately, they're not the most practical or pragmatic people and would rather dream and think about things than do them. Day-to-day responsibilities and obligations are not done with joy or enthusiasm, and even when necessary, they can find it challenging to take control of their lives and do what needs to be done. 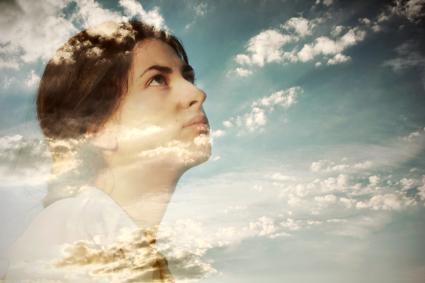 They like to talk to people and can make friends with people from all walks of life. However, there's usually an impersonal, noncommittal, devil-may-care manner to them. They're interesting and interested. They flirt, debate, and it can seem as if there is nothing more important to them than to experience life and all it has to offer.

They are part idealistic pacifist and part intellectual eccentric. They live in a strange and intangible world, have a heightened sense of awareness, and often slip into altered states of consciousness where their dreams are more real than reality.

Aquarius-Pisces are originals who are offbeat, eccentric, and unconventionally creative when it comes to living life. Their lives often have a shock-and-awe value in them.

When it comes to romantic relationships, keep in mind that Uranus, the ruling planet of Aquarius, is about breaking up and making up. In contrast, Neptune, the ruling planet of Pisces, is related to spirituality, unconditional love, peace, art, and music. As ruler of the third decan of Aquarius, Venus is connected to romance, love, and relationships. Though Aquarius-Pisces are loving and seductive individuals, they're also commitment-phobic. Anyone they become involved with can expect a wild ride. They're likely the most compatible with another Aquarian or a Pisces.

These well-known individuals reveal the shock-and-awe nature of Aquarius-Pisces cuspers.

Paris Hilton was born February 17, 1981, with Sun at 28°33' Aquarius. She has become well known for the bad behavior she sometimes shows in public and for a homemade sex video that was leaked on the internet.

Michael Jordan was born February 17, 1963, with Sun at 29°38' Aquarius. Jordon is known as the best basketball player ever. He retired twice, and it's rumored that the first retirement was in lieu of being suspended because of his gambling addiction.

Ed Sheeran was born on February 17, 1991, with Sun at 28°19' Aquarius. Sheeran angered fellow artists and got embroiled in legal battles. He also angered his neighbors when he built a massive pond to give support to wildlife. His neighbors say it supports nothing but Sheeran's "wild lifestyle."

Yoko Ono, born February 18, 1933, with Sun at 29°23' Aquarius, became internationally famous as the wife and artistic partner of John Lennon. A Yoko Ono Quote: "You can be wild and still be wise."

Matt Dillon was born February 18, 1964, with Sun at 28°50' Aquarius. According to FilmSchoolRejects, Matt Dillon's acting choices portray... "...the charming boy-next-door and a representation of the lowest depths of morality." It's said all the roles were perfectly tailored to Dillon's skills because he's "...so adept at being likable even when he's not trustworthy."

Cybill Shepherd, born February 18, 1950, with Sun at 29°51' Aquarius, is best known for her role as Cybill Sheridan in the sitcom Cybill. This sitcom revolved around the life of an eccentric feminist who practices New Age philosophy. In her autobiography, Cybill Disobedience, Shepherd states that the character of Cybill was based on herself.

Toni Morrison, born February 18, 1931, with the Sun at 29°02' Aquarius, won the Nobel Prize for Literature. Upon her death, literary critic Dwight Garner wrote: "Her prose could be lush, or raw and demonic, or carefree and eccentric, often on a single page."

Some astrologers don't believe cusps are important. Others believe that those born on the first three degrees of a sign are also born on the cusp. But, related to astrology's decans, being born at the beginning of Pisces is different from being born on the last degrees of Aquarius.

The Logic of the Cusps

The logic of cusps can be explained by the progressed Sun. Your progressed Sun moves forward one degree each year from the day of your birth. So, if you are born with the Sun on the cusp of Aquarius-Pisces, by the time you were 1, 2, or 3 years old, your progressed Sun moved into Pisces, and you spend the next 30 years of your life combining Pisces traits into your evolving Aquarian personality.

Aquarius-Pisces are originals who are a blend of intelligence, naivety, genuine innocence, and often sheer good fortune. They are friendly disrupters who often have an impersonal and foolhardy attitude about life.