The astrological Moon governs the ebb and flow of emotions. A Full Moon dramatically amplifies emotions, leading to a mix of miracles, mayhem, and, at times, lunacy. From an astrological perspective, Supermoons give you an additional dose of lunar "lunacy." Throughout the ages, Supermoons have been linked to many myths and legends, including those of the werewolf which represents humanity's most base instincts and untamed wildness.

Technically, the term "Supermoon" refers to a New Moon or Full Moon that occurs on or very near the point of the Moon's orbit that's closest to Earth, known as lunar perigee. A Supermoon is essentially a new or full moon hovering close to Earth. Scientists say that following the Supermoon by a day or two, the Earth's oceans feel the extra pull of Supermoons, and the tides are extremely high, and, on the same day, the tides plunge extremely low.

The Astrology of a Supermoon

Human emotions, just like Earth's oceans, are pulled into extreme action by a Supermoon. Astrologically, Supermoons intensify your emotional nature.

Relationships and a Full Supermoon

It's always been thought that men and women feel sexier during Full Moons. However, when a Full Supermoon lights the skies, relationship issues often come to a boiling point. Why? Because Black Moon Lilith is near the Sun, while Priapus is closer to the Moon.

The most potent Supermoons occur in very tight alignments with Priapus and Lilith, they signify a time of great desire and everything that goes with that desire; frustration, greed, grasping, competition, etc. When a Supermoon occurs, you risk being controlled by the baser aspects of your nature. You simply lust after whatever you desire and pursue it, regardless of the consequences. This could be food, drink, another person, social status, an object, or an experience. 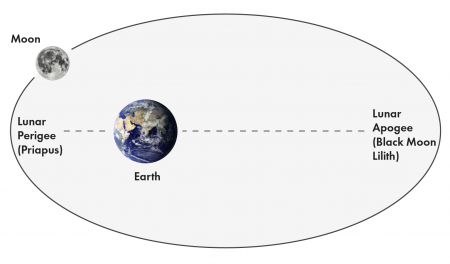 Black Moon Lilith and Priapus are really two sides of the same coin. Both are sexual outcasts. Lilith was an outcast because of her wild independent nature, Priapus, because he could not fulfill his lustful desires.

A Supermoon puts a spotlight on relationship issues related to the sign it occupies and the house in your birth chart that it amps up. But how you use a Supermoon is up to you. You can allow yourself to be consumed with lust and greed, and stubbornly and thoughtlessly pursue your desires even when they aren't in your best interests. Or you can use the Supermoon energy to reflect on what you crave so much in this area of life that it hurts, as well as the things you'd fear losing and why.

Born With a Supermoon

If you have a natal Supermoon, relationships may be of super importance and central to your life, but they are not likely to be easy. Why? Because the Supermoon in your birth chart is in close alignment with Priapus, the unsatisfied masculine, and Lilith, the untamed feminine.

Were You Born at a Supermoon?

Finding Lilith in You Birth Chart

Although many sites offer free charts, few include the Black Moon Lilith. However, if you have complete birth data, you can calculate a birth chart that shows the exact position of Tru Black Moon Lilith in your chart at Astro Seeker.

What Does It Mean to Be Born on a Supermoon?

If you were born on a Supermoon, your lunar nature is heightened and your emotions and instincts are potent forces, for good or ill, depending on how you manage them. Additionally, all matters concerning the Moon in your birth chart carries added weight. The aspects the Moon makes and the house with Cancer on the cusp is of significance, as is your Moon's planetary ruler. All of this will reveal where you may encounter obstacles to your satisfaction and fulfillment, as well as frustration. But it's also where you can find deep satisfaction if you manage your desires.

Born at the New Supermoon

For those born at a New Supermoon, the greatest wisdom can be found in questioning your desires, not satisfying them.

Born at the Full Supermoon

If you were born on a Full Supermoon, how you act is of the utmost importance. The emotional and instinctual energy that you invest in your behavior is a supercharged, life-changing force. You should value clarity of purpose above all else. If you're unclear why you want to pursue something or someone with such abandon, it's best to do nothing until you understand more.

Astrologer Richard Nolle provides Supermoon date tables for the 20th and the 21st Centuries. Here you can find out if there was a Supermoon on the day you were born and plot the dates and location of upcoming Supermoons in your natal chart.

Astronomers still prefer to call the Supermoon phenomenon a perigee Full moon or a perigee New Moon; perigee, meaning "near Earth." Astrologer Richard Nolle coined the term "Supermoon" in 1979, but it didn't gain popularity until the Supermoon of March 19, 2011.

There were six Supermoons in 2011, including a New Supermoon eclipse. However, the March 19th Full Moon was an "Extreme Supermoon." On that date, the Earth, Moon, and Sun were in exact alignment, and the Moon was at its nearest approach to Earth in 18 years. But there's more! 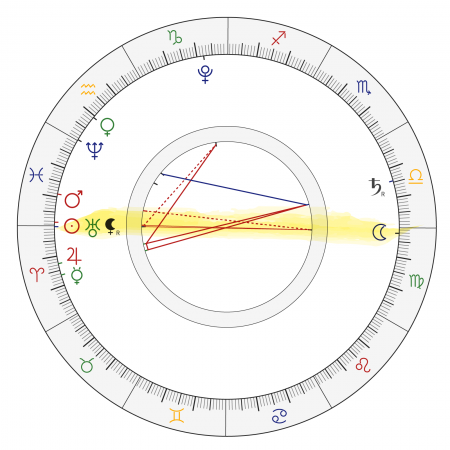 In 2011, there were three Spring Supermoons. The occurred in February, March, and April. That Spring there was a series of pro-democracy uprisings that envelope largely Muslim countries, including Tunisia, Morocco, Syria, Libya, Egypt, and Bahrain. These uprisings came to be known as the Arab Spring. Their political and social impact reverberated around the world and remain significant today. The Arab Spring underscored two major forces that were bringing change to the world.

Do Supermoons spell impending disaster? Perhaps the one on March 19, 2011, did. However, all Supermoons are not so potent.

If a Supermoon falls on a Black Moon or Blue Moon, its effect will be no different from any other Supermoon. The Black Moon and the Blue Moon are simply popular names that were given a New Moon and Full Moon that don't quite fit in with a 12-month calendar. Some astrologers believe an additional Moon makes the month more intense. But, is a Black New Moon, Blue Full Moon, September's Harvest Full Moon or January's Wolf Full Moon, etc. any different from a normal New or Full Moon? Not really.