The Elizabethans were great believers in magic, the supernatural, and the influence of the stars. How could they not have been when the rhythms and routines of their daily lives were so dependent on the skies? The stars were not dimmed by the yellow glow of big-city lights as they are today. Their world was without street lights, desk lamps, and electric wiring. They did not travel at night, any study was illuminated only by the flickering light of the candle, and plays were put on in the daylight hours of the afternoon. Consulting the stars helped Elizabethans understand the world they lived in and determine what particular course of action to take in every aspect of their lives.

"The Elizabethan Era" refers specifically to the reign of Britain's monarch, Queen Elizabeth I, from 1558 to 1601. It was the height of the English Renaissance and a transitional period between the late middle ages and the early modern era. It was a time of exploration, expansion, and voyages of discovery. It was also an era that saw the flowering of knowledge, poetry, music, and literature.

Astrology During the Golden Age of England

Astrology and magical occult practices had a critical influence on the lives of Elizabethans. Astrologers of this era spun astrology, alchemy, and magic together as a practical way of explaining and controlling life.

The most interesting part of astrology during the Elizabethan period is how it was so significantly linked with magic and alchemy, and included using charms, talismans, spells, and rituals in an attempt to produce supernatural effects and control events.

The astrology practiced during the golden age of England was not psychological or humanistic, rather it was similar to what's now called Traditional or Renaissance Astrology.

Consulting a local stargazer or a more costly private practitioner in London provided explanations and answers in many areas of an Elizabethan's life. People consulted astrology for many facts of life, such as when to get married, when to look for a job, what specific course of action to take and when to take it, and even for good or bad luck in love.

As a matter-of-fact, Elizabeth, for whom the era is named, used astrologer John Dee to select January 15, 1559, as the day for her coronation. The selection of this time may well have contributed to Queen Elizabeth I's long and very successful reign, and Dee's involvement in selecting such an auspicious time may well have assured his position as a favorite in the royal household. 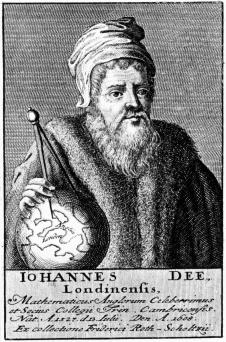 There were several notable astrologers during this era, but the most important was Dr. John Dee. Dee was a fascinating character whose life was filled with science, experiments, and mathematics, which he aligned with astrology, magic, the supernatural, and alchemy.

He served as the consultant and astrologer to, among others, Queen Mary I; however, his activities related to astrology, magic, and the supernatural led him to be jailed for a short time in 1555 on the charge of conjuring.

Following Queen Elizabeth I's ascent to the throne in 1558, Dee became her confidant (some say spy) and her astrological adviser. The list below makes it clear that John Dee made substantial contributions to Elizabethan England. It's also not a stretch of the mind to think that today's society would not be the same if it were not for Queen Elizabeth's astrologer, Dr. John Dee.

According to The John Dee Society:

The Influence of Astrology on William Shakespeare

Shakespeare certainly must have had knowledge of astrology as it was often critical to his plots, and it's mentioned it every one of his plays.

Shakespeare's astrological knowledge allowed him to reach his audience because it was a language both the groundlings and the gallery understood.

During the Elizabethan period, astrology was used for calendars, medical purposes, horticulture, agricultural, navigation, and many other things. Elizabethans could buy an almanac with the latest astrological forecasts for just a few pennies. These almanacs provided information about dates, high tides, and the phases of the moon, as well as predicting the weather for the year ahead. Millions were produced and sold during Elizabethan times.

Elizabethans believed in spirits of good and evil. They believed in supernatural arts, such as sorcery, sympathetic magic, and demonology. They felt charms, white magic, and prayers could be used to fight off evil. They thought the Earth was the center of the universe, and the positions of the planets affected everything in their daily lives. They believed in astrology, and both nobility and commoners were familiar with the basic astrological concepts of the time and had a rudimentary understanding of the language of astrology. It's safe to say that both astrology and astrologers were held in very high regard during the Elizabethan Era.

2
Comments
© 2006-2020 LoveToKnow, Corp., except where otherwise noted. All Rights Reserved.
Understanding Astrology in the Elizabethan Era