The number 13 is considered an unlucky number. Many tall buildings don't have a 13th floor; in Feng Shui 13 is generally considered a bad luck number, and then there's Friday the 13th. So, if (and that's a big if) Ophiuchus is astrology's "13th sign" should it also be considered a sign of bad luck? You be the judge!

Ophiuchus is usually depicted as an elderly man holding a snake in two hands. Though Ophiuchus and Serpens are often described as one constellation, in fact, they are two. Serpens (the serpent) consists of two disconnected parts that are separated by Ophiuchus (the snake charmer). The duel constellations carry contradictory themes of kill or cure, both of which relate to periods of critical danger or change.

These constellations are intricately intertwined and can be seen in the dark sky of the northern hemisphere from June through October. They are centered on the equator and lie between the constellations of Sagittarius and Scorpius.

Ophiuchus is generally identified as Aesculapius. In Greek myth, Aesculapius was the son of Apollo and Coronis, a woman who was married to another. Coronis was fatally wounded by an arrow from Artemis as punishment for her adultery. Apollo delivers his child from his dying mother while she's on the funeral pyre and places him the care of Chiron the Centaur, who teaches him the art of healing.

Aesculapius eventually becomes so skilled that he raises a man from the dead. This angers Hades, the god of the underworld, who takes his complaints to Zeus. Zeus then kills Aesculapius with a thunderbolt and places him in the sky as the constellation Ophiuchus.

Aesculapius is so pivotal to medicine that the original Hippocratic Oath begins, "I swear by Apollo, the Physician, and Aesculapius and Hygeia and Panacea and all the gods and goddesses, making them my witness, that I will fulfill according to my abilities, and judgment this oath…"

From the earliest records of civilization, the snake played a significant cultural role as an enigmatic creature with supernatural powers. They are alternatively seen as the benevolent creator, protector of wisdom, and eternal life, or as a perpetrator of evil and an agent of death. It's a snake's the ability to shed its skin that also makes it a potent symbol of healing and regeneration. Myths say that it was a snake that taught Aesculapius to raise a man from the dead with the application of herbs. The serpent is important because it represents the ancient pharmaceutical elixirs to cure all illness. 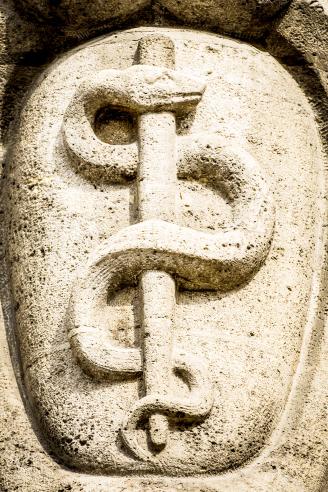 Even today several well-known associations use the Rod of Aesculapius with the snake wrapped around it as their symbol. These include the American Medical Association, the United States Air Force Medical Service and the World Health Organization (WHO).

Fixed Star Astrologers say the stars of Ophiuchus that seem to cause the most harm are those on the left side of the figure, especially around the figure's left hand, which holds the forefront of the snake's body. Interestingly in one Aesculapius myth, Athena was said to have come to honor her nephew Aesculapius. Looking at her he saw a vile appear in each of her outstretched hands. "These are my gifts to you," she said. "They are filled with Gorgon blood. The blood in my left hand will kill, that in my right will heal." 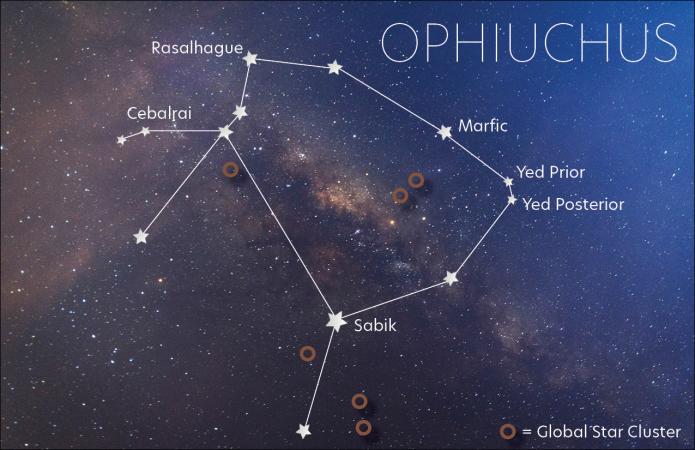 Sabik, the left knee, at 17°58′ Sagittarius is said to cause wastefulness, lost energy, perverted morals, and success in evil deeds.

Sinistra, the left hand, is at 29°45′ Sagittarius. Sinistra comes from the Latin word sinister, obviously has ominous connotations. It's thought to be immoral, mean, depraved, lustful, infamous, scandalous, addicted to sorcery and poisoning

Yed Posterior, the backhand, is at 3°31′ Sagittarius. It has traditionally been given an especially 'evil' influence and often associated with death.

Astrology King, who studies the Fixed Stars in the constellations writes: "Constellation Ophiuchus is said to give a passionate, blindly good-hearted, wasteful and easily seduced nature, as well as unseen dangers, enmity, and slander." The Ophiuchus myths and Stars reveals that love, betrayal, infidelity, birth, death, healing, and resurrection, as well as thunder and lightning, are all a part of Ophiuchus' meaning.

The constellations Ophiuchus and Serpens are now the backdrops for the astrological zodiac's signs of Scorpio (whose ruler is Hades/Pluto) the god of the dead and Sagittarius (whose ruler is Jupiter/Zeus) the "God Father" of the sky. This gives a clue to the life or death meaning of Ophiuchus, or as Friedrich Nietzsche, the German philosopher, famously said "What does not kill you, makes you stronger"

Ophiuchus is not considered the "13th sign" of the astrological zodiac by Traditional Western or Sidereal astrologers. Of course, there are a few astrologers in both disciplines who believe the introduction of Ophiuchus has revolutionized astrology. Some have even attempted to define Ophiuchus' traits, but there's little consensus even among those who use the "13th sign" as to its element (some say Fire; others say Water), modality, ruling planet, or even whether it's masculine or feminine. All of which are used to help define the traits of the 12 astrological signs.

Astrological Sun sign compatibility is determined first by element and modality. However, there's no consensus about these related to Ophiuchus. So, until those astrologers who consider Ophiuchus the "13th sign" do more observation and correlation, accurate Ophiuchus traits and the Sun signs that are the most compatible with Ophiuchus will remain a mystery.

The Signs of the Zodiac and the Constellations

Astrologers who use the Tropical and Sidereal Zodiacs believe the mythology of the surrounding constellations are an important part of the nature of the sign it backdrops. So, even traditional astrologers who don't consider Ophiuchus the forgotten astrological sign, do consider it relevant. The Bottom line is that astrologers have always known about Ophiuchus, but that zodiac signs and the constellations are two entirely different things.