Some say that astrology is the language of the sky. And in a way it is! It's full of calculations, symbols, hieroglyphics, and mystery. It can be exciting and confusing. But it's like any other language, once you begin to learn and use it, how it works starts to make sense.

The Mechanics of Astrology

The sky is in constant motion, and a natal chart is like a snapshot taken of the moving sky on the day and at the exact time and place you were born. The horoscope is an astronomical map that shows the location of your Ascendant, Midheaven, Sun, Moon, and planets, along with the signs and houses. It pinpoints your place in time and space.

Astrology can be roughly divided into two parts.

Of course, a horoscope is written in zodiacal hieroglyphics. So, to read a horoscope you'll have to learn the written language of astrology.

Astrology is a language of symbols and glyphs that go back many thousands of years. All the signs, planets, and aspects have a glyph. Once you know what the symbols represent and have a list of keywords, you can begin translating the language of the sky and get a feel for how astrology works. 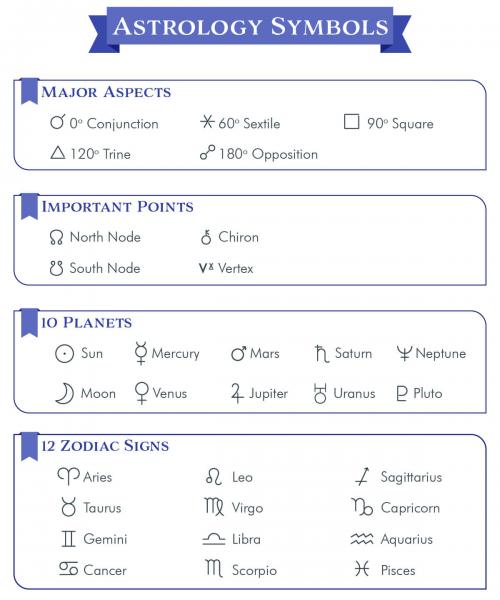 With the use of keywords for the planets, signs, and houses anyone can analytically translate a horoscope. Briefly, keywords put key-phrases, key-sentences, and key-paragraphs together. There are many keywords for every planet, sign, aspect, and house. Various disciplines of astrology use different keywords. The lists below contain just a few of those used in natal astrology.

Keywords for the Signs:

Keywords for the planets:

Keywords for the Houses:

Keywords for the major aspects:

Keywords can decipher a birth chart. All that needs to be done is to plug in the keywords and begin putting sentences to together. Keywords are fun. You can use any of those listed for the sign, planet, aspect, and house and determine how it fits the life. Do this a few times with your own birth chart and you'll have a rudimentary understanding of how natal astrology works.

A woman has a Capricorn Sun in the fourth house Square her Moon in Aires in the eighth house. This could be interpreted in several ways using different keywords, but among those is: The woman's sense of self (Sun) depends on being part of a traditional (Capricorn) family (fourth), but that is challenged (square) by her mother's (Moon) secret (eighth house) actions (Aries).

Of course, this could describe a number of scenarios, but within the context of this woman's life, she never felt like she was part of her family growing up. She sensed she was somehow different from the others and always felt a lack of belonging. She was raised near her father's family; her maternal relatives were hundreds of miles away. After her father's death, she questioned her mother who reluctantly confirmed that the man she knew as Dad was not her biological father. Her mother had kept the truth about her heritage a secret from her for over 50 years.

Keywords can also be used when determining astrological compatibility. For instance, when comparing two charts, knowing just the aspect keywords will give you clues to where the ease, struggles, merging, and opportunities lie in a relationship. The keywords for the signs, planets, and houses then flesh the story out.

This could have played out in many ways, but within the context of this love affair, the man's haiku poetry inspired his lover to create illustrations that brought each to life. As a couple, they co-authored and published five illustrated poetry books.

How astrology works analytically is different from the why astrology works. Astrologers have never been able to explain precisely why it works so magically as a tool for human understanding. Theories exist, but the best answer to why it works might be, astrology works because it works! And it provides millions of people with a rich source of information for understanding themselves and bettering their personality, lifestyle, romances, occupations, future, and much more.