Understanding the tarot card deck isn't terribly difficult, but it does take time and practice to grasp and apply its deeper nuances. This basic primer will give you a solid base on which to build your future reading skills. Once you have a basic understanding of how a deck is arranged, you can begin to decode your own deck and its unique workings.

The tarot holds a great deal of fascination for many people. It can help focus the concentration and powers of intuition, as well as help carve out a path that will lead to greater satisfaction.

However when it comes to actually understanding the tarot card deck many people feel a bit flustered, preferring to rely on the skills of an experienced reader. Instead, try learning how to read the tarot yourself. All you need to do is break the deck down into its ordered divisions and begin familiarizing yourself with them.

Although there are hundreds of different tarot decks in circulation each with specific meanings attached to their cards, there are some basic things they all have in common.

Breakdown of the Deck

Every tarot deck has a total of 78 cards, and each of these cards falls into one of two basic categories: the Major Arcana or Minor Arcana.

This portion of the deck is the star of the show. Here you'll encounter the first 22 cards of the deck; the cards that hold the greatest importance in any reading, although the assistance of the rest of the deck is needed to help fully interpret their individual meanings.

The next 56 cards in this numbered deck make up the Minor Arcana. Although these cards may seem slightly less important than those that make up the Major Arcana, you cannot properly interpret a reading without them. Think of this portion of the deck as setting the stage for the "Major" players. 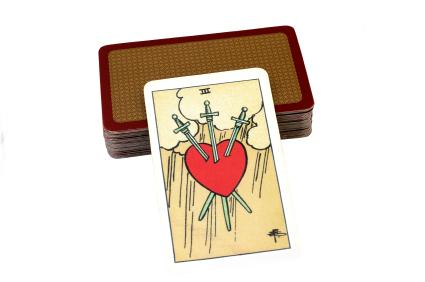 Within the Minor Arcana you'll find a further division of the cards into four basic suits, just as you would find in a normal deck of playing cards. In this case these suits may have slightly different names according to which style deck you're using, but you should be able to identify the suits in your deck with the ones below.

Each of these suits resembles the way a standard playing deck of cards lays out, with a total of 14 cards each. The Ace opens each suit, followed by the numbered cards two through ten, as well as the royal face cards of the Page, Knight, Queen and King. While the suits are different, the numbering system and basic display of the four suits is structurally identical to any deck of cards.

The suits serve to provide detail to the overall context of the entire reading and supplement the other 22 Major Arcana cards. For example, if you notice an abundance of Pentacles in a given layout or "spread", you can assume that money/career and other physical rewards are going to be the main focus of the reading. Likewise, if you notice an overwhelming presence of Cups in the tarot spread, this suggests that matters of romance/emotion are at the forefront of this particular reading.

When drawing cards for a spread, it's important to understand that the directions in which the cards emerge have a definite effect on their meanings. When a card is turned to face the reader so it appears right side up, its meaning should be interpreted as the original meaning assigned to the individual card.

However, when the card appears upside down when placed in front of the reader, the meaning is interpreted as opposite from the card's original meaning. For example, The Fool (0) signifies innocence and enthusiasm, but when viewed upside down it can mean that innocence has been lost, and enthusiasm has dulled.

Take Your Time Learning Your Deck

Understanding the tarot card deck will give you enough confidence to interpret a reading. Remember that no one becomes a tarot expert in a day, but if you apply yourself you'll advance your skills and eventually become quite adept at interpreting the mysteries contained in every spread.

Get an online tarot reading from Tarot.com.