Are you interested in a particular Taurus man? If so, you're in luck: LoveToKnow has written an eBook all about how to make Taurus fall in love with you (and what to expect in the long run, when it happens). Get the book, and you'll know how to achieve your romantic goals with Taurus!

The Taurus Man in Relationships

Taurus, the fixed earth sign of the zodiac, is governed by feminine Venus, the planet of love, beauty, and money. This indicates that a Taurus man is romantic, sensual, and attached to everything beautiful, aesthetic, and pleasing in life. He's a lover of nature, music, and the creative arts, as well as a calm, reliable, and determined individual who has a desire for financial security, material comfort, and marriage.

Taurus man is a stability-loving homebody who's attentive, loving, fiercely loyal to, and protective of those he loves.

Negatively, a Taurus man can be possessive, overprotective, stubborn, and uncompromising.

The Aries Woman in a Relationship

The cardinal fire sign of the zodiac, Aries is ruled by masculine Mars, the planet of passion, desire, and the drive for sex. This indicates and Aries woman is an action-oriented, independent lady who loves adventure, and is always on the go.

An Aries woman is an interesting and exciting romantic partner.

Negatively, an Aries woman is impatient, impulsive, and has a short-temper.

The differences between a Taurus man and an Aries woman are a source of fascination for both. This initial interest is enough to spark a romance that will either be a brief, but torrid, affair or a lifelong challenge for both.

Attraction: Their Differences Ignite a Spark

An Aries woman in love is a flirt, risk-taker, and a fighter. A Taurus man in love is a cautious and steadfast nester. She's quick to fall in love and feels alive when pressing forward against the resistance of a Taurus man, who is caution and takes his sweet time when it comes to love and romance. An Aries woman initiates, plants the seeds of romantic passion, while a Taurus man tends the garden, brings it to fruition, and makes the romance bloom. But when they do fall in love, they'll need to put some effort into constantly seeding and caring for the garden if they want to sustain its beauty. 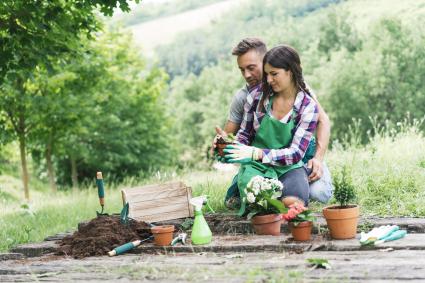 A Taurus man and an Aries woman may have their share of other problems, but sex isn't one of them. As a matter of fact, most of the issues that arise can be settled in the bedroom. An Aries woman and a Taurus man are usually quite sexually compatible. The Taurus man loves the way an Aries woman takes the lead in the bedroom, and his passionate nature allows him to follow her spontaneous lead. Their different roles can make their lovemaking both enduring and satisfying for both.

An Aries and Taurus in love are very passionate about each other and can look forward to a thrilling, ardent, and creative romance that can last a season or a lifetime, especially if love is the fertilizer. But it also helps if they have a shared sense of values, shared creative projects, and a grounded vision, as well as the ability to communicate with one another.

An Aries woman is a leader who likes to take charge. A Taurus man is a caretaker and manager who excels at handling resources. Additionally, both are stubborn, sensitive, and have tempers. There has to be communication and an understanding of the role each plays in the relationship if it is to last.

The Importance of Mercury

Determining astrological compatibility is complicated, but if you want to dig a bit deeper, check out the pairing's Moon, Venus, and Mars signs. This will provide a more in-depth sense of how a particular Aries and Taurus might get along. Additionally, look at the planetary rulers (Mars for Aries, Venus for Taurus). The specific ways the love planets in the two charts connect can be also be revealing.

Commitment Goes a Long Way in a Taurus-Aries Relationship

If both Aries and Taurus are committed to making their relationship work out, an enduring romance is possible. Although this is not necessarily a match made in heaven, both signs tend to be tenacious, loyal, and passionate towards those they love. These three traits alone will help this pair make it through the tough times and teach them to appreciate one another.