Constellation Taurus, the "Bull of Heaven," is one of the earliest and most famous constellations. It can be seen in Palaeolithic cave paintings that are dated to about 15,000 BC at Lascaux in southwestern France. The Sun's entrance into Taurus marked the vernal equinox from about 4000 to 1700 B.C. and in all the ancient zodiacs that have been preserved, Taurus began the year.

Taurus is probably the loveliest constellations of the northern winter sky. There are at least 141 stars and two significant groups of stars that are brilliant to observe.

This constellation is relatively easy to find. It has an asterism that forms a large "V" that represents the head and horns of the bull. The brightest star in Taurus is Aldebaran, the bull's right eye, and another five stars form an almost perfect small "V" that extends out to two more stars that are the points of the bull's horns.

When It's Easiest to Locate the Taurus Constellation

In October and November, the constellation Taurus begins to appear just after sunset in the Eastern horizon. If you're viewing from the northern hemisphere, the best time to observe Taurus is from December through January. During these two months, it moves higher in the night sky and by March and April, it will be low on the Western horizon.

Finding the Hyades and Pleiades

Taurus has two clusters of stars, the Hyades and the Pleiades, that can be seen with the naked eye. Though they can be seen from November through March, the best months are January and February. This is the time when they are high overhead for northern observers and low on the northern horizon for southern observers.

It's always easier to locate a constellation if you have a sky map that's specific to your location. These are available online, and three of the best are listed below.

The Constellation Zodiac and Astrological Zodiac

Astrology and astronomy use different systems that divide the sky in varying ways. Of the 88 defined constellations, thirteen touch on the Earth's ecliptic. Astronomers call these the constellation zodiac. The twelve astrological zodiac signs bear the same name. Only the constellation Ophiuchus was left out.

How Constellation Taurus Is Relevant to Astrology

It's not that the constellation zodiac isn't relevant to astrology; it is. The history and myths of the constellations that touch the Earth's ecliptic help to define astrology's twelve signs. All thirteen give an added layer of meaning to astrological interpretations, but they are not the same.

The Astrological Influence of Taurus

Manilius, the 1st Century astrologer, said of the Taurus constellation, "The bull will dower the countryside with honest farmers and will come as a source of toil into their peaceful lives; it will bestow, not gifts of glory, but the fruits of the earth." He also characterized Taurus as dives puellis, "rich in maidens," and Ptolemy observed Taurus had the temperament of Venus. The planet Venus, at her most earthy and sensual, is the ruler of the astrological zodiac's sign of Taurus.

The fixed stars of the Taurus constellation are not fixed, they just move very slowly. It takes about 70 years for them to move one degree. If the sign and degree of a fixed star are conjunct or opposite a planet in a horoscope, particularly the Sun, the chart ruler or one of the angles, the influence of the fixed star, will be emphasized in an individual's life affairs and personality. 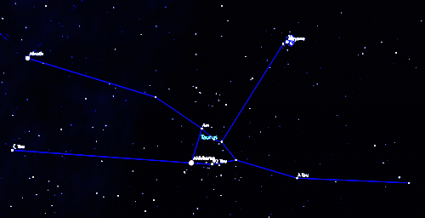 There are 15 fixed stars in Taurus; of these, perhaps the most important is Aldebaran.

Aldebaran, the bull's eye fixed star, is one of the brightest stars in the heavens. It is one of the 15 Behenian fixed stars and along with Regulus, Antares, and Fomalhaut, one of the four Royal Stars of Persia. These four stars once marked the equinoxes and solstices. They are considered the guardians of the heaven, and Aldebaran was the guardian of the eastern sky.

Also known as M45 or the Seven Sisters, the Pleiades is a cluster of seven stars that rests on the bull's shoulder. The Pleiades' brightest stars were named for the Seven Sisters in Greek mythology: Sterope, Merope, Electra, Maia, Taygeta, Celaeno, and Alcyone. There are two other primary stars in the Pleiades; Atlas, the father of the sisters, and Pleione, their mother and a goddess of the ocean.

The Seven Sisters in Agricultural Calendars

The Pleiades were a predominant feature in ancient agricultural calendars. The near dawn rising of the Pleiades in the spring in the northern hemisphere has, from time immemorial, marked the beginning of the farming season. This cluster of stars is one of the nearest to Earth, and all but one star can be seen with the naked eye (which makes you wonder how the ancients knew there were seven). During the winter, it can be found in the Northern Hemisphere and during the summer in the Southern Hemisphere.

Myths of the Pleiades

Many early temples and pyramids were aligned to the rising and setting of the Pleiades, and they are the subject many ancient myths of cultures all around the world.

The Pleiades are also mentioned directly three times in the Bible's Old Testament.

There's a single indirect reference in the New Testament.

They were written about by Hesiod, and in Homer's Iliad and Odyssey, and some early Greek astrologers/astronomers even considered them to be a distinct constellation.

The Secrets of Seven

More recently, some groups of individuals view the Pleiades as a Stargate and others connect it with extraterrestrial beings. The Seven Sisters are also believed by some to represent the seven chakras and the seven archetypes of female leadership.

The Pleiadeans are said to have an overdose of Venus. Dark Star Astrology has many great examples, one being the famous soccer player, David Beckham, who has the Pleiades's Alcyone on his ascendant. Though a sports hero, Beckham has no problem with his feminine side and isn't bothered in the least with wearing a sarong or nail polish.

The ancients had no electricity. There was no TV to occupy their evenings or light pollution to dim their view of the night sky. When the Sun went down, the heavens provided the best show around. They correlated what they saw in the sky with what was happening on Earth and explained it with wondrous, dramatic, and detailed stories that were what early astrologer/astronomers used to define the signs of the astrological zodiac.

The ancients noted Taurus rises and sets with the Sun. When the Sun rose in the sky, Taurus seemed to disappear, spring arrived, and the Earth began to renew herself.

The Age of Taurus

The Bull symbolized the Age of Taurus, and it still represents the astrological sign of Taurus.

The Age of Taurus extended from about 4190 BCE until 2125 BCE, and true to the sign of Taurus's reputation as a builder, this was the age of the builders. These builders left their mark on the landscape by creating long lasting monuments, massive pyramids, and other large stone structures all over the world. These were so well engineered and solidly built that they are still viewed in wonder today.

From Hunter to Farmer

In addition to these builders, the Age of Taurus saw the domestication of bulls and cows, and the harnessing the power of the bull to plow the soil birthed the farm and the farmer. This was a pivotal happening in the history of civilization. Since the beginning of recorded history, the sign of Taurus been associated with farming and the bounty of Mother Earth.

Taurus is feminine sign ruled by the planet Venus, which is reflected in the goddess worship that was so common during the Age of Taurus. In Greek legends, Venus was Aphrodite, the goddess of love, beauty, and sexual rapture. The Roman goddess of love was Venus. Ceres was the Roman goddess of horticulture, plants, and agriculture. Isis is the Egyptian goddess that is often depicted with a crown that is a solar disk between two great horns. The Semitic goddess, Astarte, or Ashtoreth, is often represented as a young woman with cow's horns atop her head.

It easy to see that to the ancients, Taurus represented what it does to astrology today - the strength, fertility, sensuality, and endurance of the feminine, as well as the sacredness of Mother Nature. The astrological sign of Taurus is the human need for safety, security, and sustenance. She is the builder, the farmer, and environmentalist, who enjoys life through the five physical senses and is driven to create a bit of heaven on Earth.