Tarot cards are rich with symbolism and if you understand the symbols on the cards, you can offer a full tarot reading by interpreting them, even if you don't know the individual meanings of each card. Depending on the tarot decks you use, symbols come from numerology, archetypal energies and symbols, meanings of colors, astrology, and spiritual symbolism, among others. If you are ever feel stuck during a tarot reading, turn to the card's symbols to provide more information.

Tarot Symbols Depend on the Deck You Use

The symbols discussed below are found on traditional tarot decks based on the Latin Tarot, such as the Rider-Waite-Smith deck. Many modern decks exist with different images, organizations, themes, and symbols. However, you can interpret symbols on these cards using symbols from dream interpretation or psychic symbols, numerology, Jungian archetypes, and color meanings to bring the reading into focus.

Symbols of the Minor Arcana

The 56 cards that make up the Minor Arcana of the tarot card deck are divided into suits similar to regular decks of 52 playing cards. The suits of the minor arcana are pentacles, wands, cups and swords. The meanings of each suit are based on the four classical elements, earth, air, fire, and water.

Pentacles represent the classical element of Earth. This is a grounded element, and it's rooted in the physical. Therefore, when a pentacles card appears in a tarot spread, it is imparting information about the querent's physical state, or it's discussing information about the physical (material) world the querent inhabits. Some topics a pentacles card may be addressing include the following. 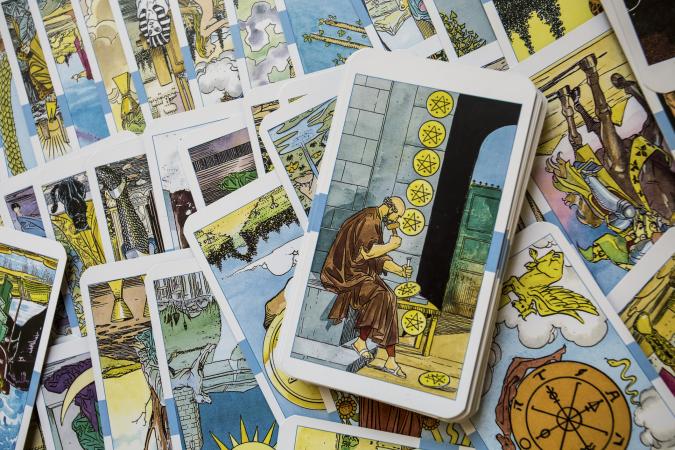 Cups represent the element of water. An easy way to remember this is that cups hold water. Water is an emotional element, so when cups appears in your tarot spread, it's addressing issues primarily associated with the emotions. Some topics a cups card may represent include the following. 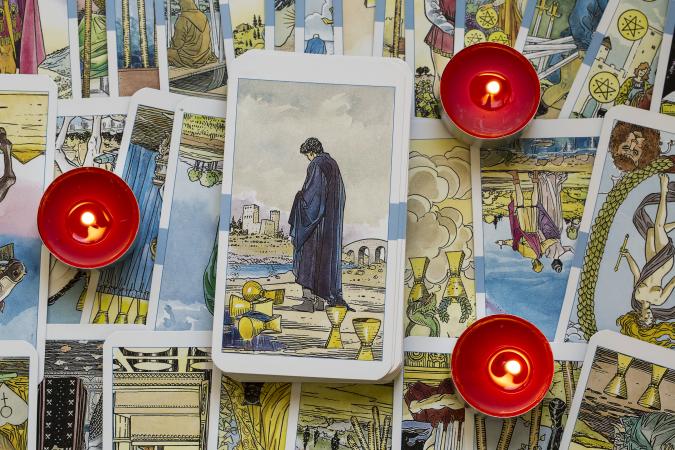 Wands represent the element of fire. An easy way to remember this is to picture sparks shooting from the end of a wand. Fire is an active and primal energy that is associated with spirituality and higher thought. It's also associated with passion and drive. When wands show up in a reading, they may be indicating some of the following. 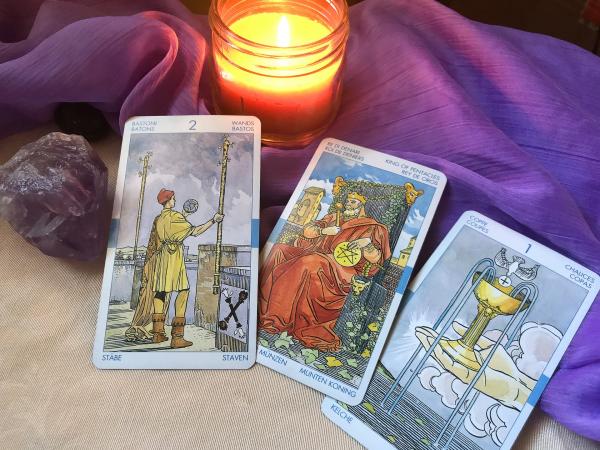 Symbols Found in the Suit of Swords

Swords represent the element of air. An easy way to remember this is to picture a sword swishing through the air. Air is associated with your mental self and the realm of thought. Some things swords may represent when they show up in a tarot reading include the following. 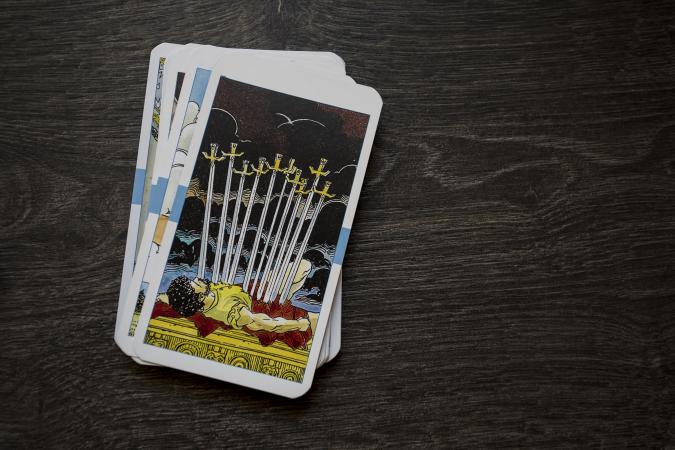 Symbolism of Numbers in the Tarot

Like a regular deck of cards, each minor arcana tarot card is either a number card (ace through 10) or a court card (Page, Knight, Queen, King). Each of these has its own symbolic meaning. 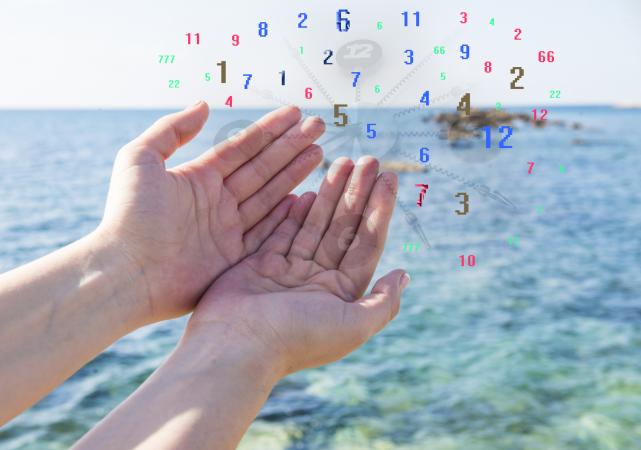 The court cards are the face cards in each suit of the tarot. There are four in each suit, and they symbolize the following. 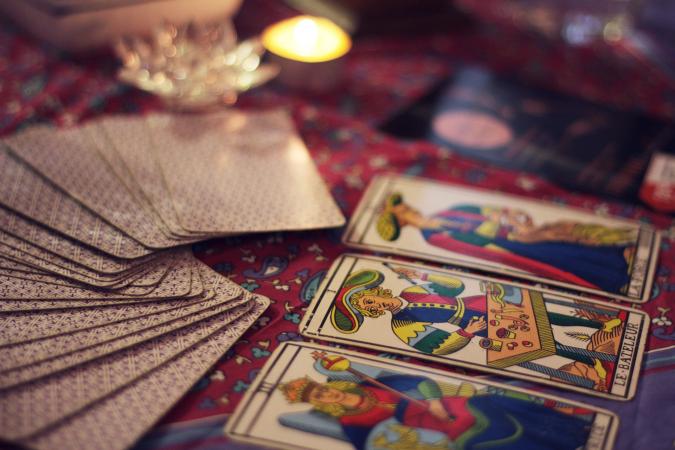 How Colors Are Symbolic on Tarot Cards

Tarot cards are colorful, and the colors chosen in the images tend to have symbolic meanings based on the psychological effects of colors and the spiritual energy color association with chakras or auras. So when interpreting a tarot card, pay attention to the colors the artist or printer has chosen along with the images and numerology. 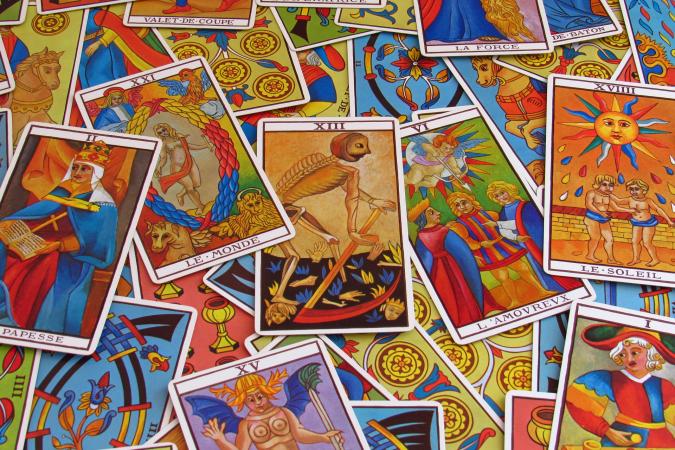 Most tarot decks have detailed artwork on each card. The elements within the scene can help the reader interpret the insights gathered during the reading. Many of these elements are not what they appear to be, but they are symbolic and may have a meaning that varies slightly from the obvious picture. 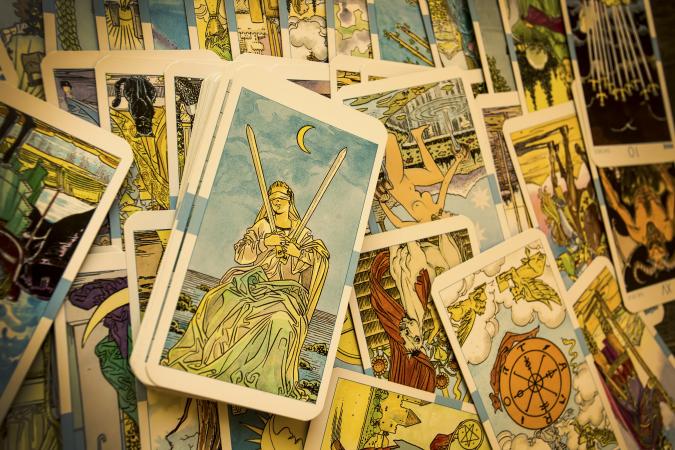 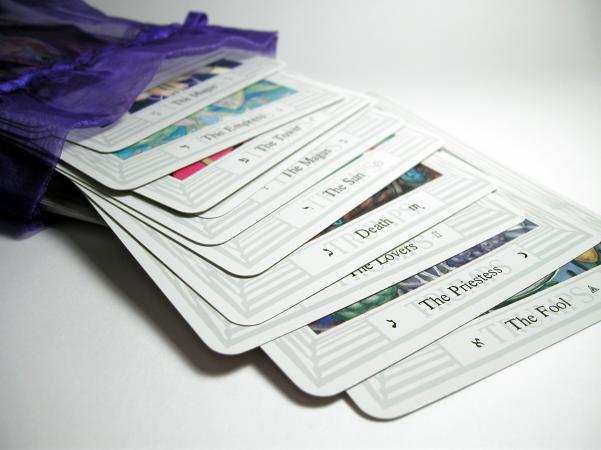 There are also different ways to interpret tarot card symbols. The most universal way to interpret them is universally. For example, Jungian archetypes are believed to be universal symbols. That is, they are symbols that everyone, regardless of race, religion, culture, or family background, recognize because they come from the collective conciousness of humanity as a whole. Examples of universal symbolism includes pregnancy and birth as meaning creativity, or a heart as a symbol of love. Other frameworks through which you can interpret symbols include the following.

These tend to be personal and individualized. For example, if you had a pet cat when you were a child, a cat may symbolize joy, love, or happiness to you.

Symbols Associated With Family or Tribe of Origin

Families and tribes have their own symbols within the tribal unit, and these vary from tribe to tribe. For example, family coats of arms, family crests, or Scottish family plaids have symbolism pertinent to a tribe or family that may not be universally recognized.

The area you live also affects how you view certain symbols. For example, if a local high school has a dolphin as a mascot, the dolphin may represent learning or sports prowess regionally.

Symbols Based on Religion, Culture, Race, Nation, or Heritage

Each of these societal units has their own symbolism that is important and recognizable to that group. For example, in the US the eagle symbolizes freedom and in the Christian religion, the cross represents the crucifixion of Christ. As another example, almost universally among Western countries, the swastika represents the Nazi party and the atrocities of World War II, but in the Hindu religion, it represents the sun, prosperity, and good luck.

Interpreting the Symbols of Tarot

All of the above go into interpreting tarot cards based on their symbolism. Therefore, careful consideration of each is helpful when you are performing a tarot reading. Since you often don't know what a querent's personal, tribal, or cultural symbolism is, if you are reading their tarot cards, you can ask them what they notice in the images of the cards and what those things represent to them before moving on to a more generalized reading.