A closer look at common Scorpio female traits reveals just how complex, fascinating, and magnetic these lovely ladies can be. Highly intelligent and very courageous, Scorpio is no shrinking violet. In fact, when this woman decides what she wants, she'll go after it regardless of the challenges in her way.

She Guards Her Secrets Closely

Scorpio women guard their secrets as closely as Tauruses guard their 401k portfolios; it's that important. This is not to say a Scorpio woman can't be chatty; she can be. However, you need to understand that she:

Keeping all those secrets can make for a rather intense personality. Many Scorpio women tend to:

A Scorpio Woman Has an Aloof and Calm Personality

Paradoxically, Scorpio women tend to be quite aloof on the surface. Even when they like someone, they'll still fix those steely eyes on that person and make him quake all the way down to his boots. The more she wants something, the less likely it is she'll let on. This all plays very nicely into her psychological game of getting what she really wants.

In Conflict, She Bluffs

Even in the middle of a fight with the love of her life, this woman will dare her lover to pack up and leave. Don't be fooled. This is just a tactic designed to test the strength of your love. At a board meeting, she'll calmly walk away from talks letting her opponent sweat it out a bit. Again, this calm exterior is designed to get everyone to fall in line.

Is a Scorpio Woman Shy?

Although a Scorpio woman has a quiet, cautious manner, is secretiveness, and has an aloof demeanor, she's certainly not shy. This is a woman who's ruled by Mars the planet of war and conflict. Scorpio, a water sign, is connected to emotions and the subconscious. A Scorpio woman has a penchant for psychodramatic antics and pushing the emotional buttons of others.

To be sure, a typical Scorpio's traits can be daunting to deal with, but many people choose to do so because this lady is incredibly sexy and magnetic. Note that sexy does not necessarily mean sexual, although most Scorpios can be quite sexual when paired with the right individual.

Whether it's her almost glass-like eyes or her Mona Lisa smile, this lady just radiates sexual energy but unlike other zodiac signs, there's a dangerous quality that lurks just beneath the surface. You just don't know if she's going to have her way with you, hurt you terribly, or do both.

Perhaps it also helps that Scorpio women are also incredibly magnetic. Whether this is due to their seething emotional life or their capacity to understand the darker nature in everyone, they just seem to draw people to themselves. Much like the spider and the fly, once you've been invited in, there's only a slim chance you'll leave.

Why Love a Scorpio Lady?

The sexuality, the secrets, the magnetism; it all sounds like so much to deal with, so why bother? It's worth dealing with a Scorpio beauty because of her:

When you add all these traits together, a Scorpio woman may actually be one of the nicest, kindest, most honest and good-natured person you've ever met.

The other reason is one you've probably already guessed. Despite the drama, once a Scorpio woman loves you, she'll love you for life. If she really believes in you, she will look past your flaws (but she will comment on them) and risk life and limb to keep you safe from harm. If you're looking for a passionate, long-lasting commitment, look no further than a Scorpio beauty.

A Scorpio woman has strong facial features. Her face has an angular shape, her chin is strong, and she can have a striking nose. However, her most recognizable physical feature is her large eyes and her staring penetrating gaze that seems to see right into you. Some call her hypnotic gaze the "silent soulful contact," others call it "Scorpio eye-fire" or the "death stare," but no matter what you call it a Scorpio woman does make intoxicating and intense eye contact. 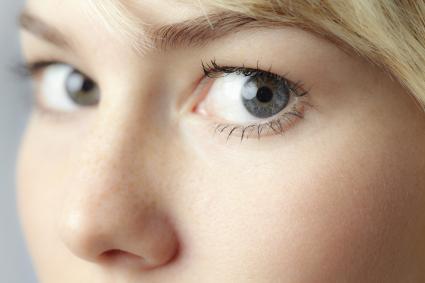 The following women use their Scorpio traits to the fullest, and they are great examples of what a Scorpio woman can achieve when she sets a goal for herself.

Scorpio Women Are a Fascinating Mix

Scorpio women are a fascinating mix of spirituality and sexuality because this is what their planetary ruler, Pluto, governs. It's quite natural for a Scorpio woman to explore the hidden depths of her personality, and then reverse the trend and soar to the very heights of her spirituality. However, this curious mix of passion and spirit is not for others to understand. For this reason, Scorpio tends to be something of a loner, even when she's in the middle of a crowd. In fact, one-on-one relationships are much more her forte than paling around in a group. In other words, if you really want to get to know this woman, the best way is to speak with her in a quiet place where you are unlikely to be disturbed. This way, you'll be able to concentrate on all that she is saying and, just as important, what she's keeping to herself.