Scorpio's symbols go a long way in explaining this complex and magnetic zodiac sign. Scorpio is the only astrological sign that has not one, but four symbol associations: the scorpion, the snake, the eagle, and the Phoenix.

The Scorpio Symbol in a Horoscope

The astrological glyph for the sign of Scorpio is an M with the final slash pointing upward with an arrow tip. This symbol is commonly said to depict the scorpion and its stinger every ready to strike in the face of danger, or as a phallic image, since Scorpio rules the sexual organs. However, those with a more spiritual bent say that the symbol represents Kundalini energy spiraling, like a serpent, up the spine towards the third eye.

The scorpion is an amazing, complex creature that is bent on survival. It's hostile, defensive, cautious, and has a keen sense of its surroundings. Scorpions crawl on the ground, hide in dark corners, and, if threatened, strike out with their deadly tails. Additionally, scorpions have a magical "glow" when exposed to ultraviolet light. The sign of Scorpio has often been associated with magic and the protective attributes of the scorpion are also metaphorically noted in the sign of Scorpio. 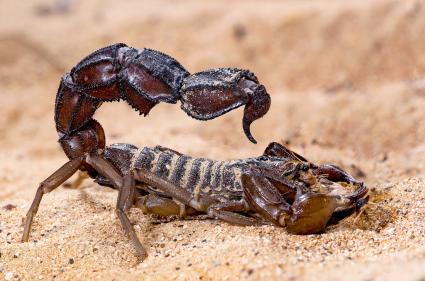 The astrological sign of Scorpio is ruled by the planets Mars and Pluto. The Scorpion illustrates the Mars factor of Scorpio. It symbolizes the aggressive intensity of a Scorpio's rage, their self-protective natures, and their desire to "get back at" those who harm them. It also illustrates their sexual nature. A Scorpion's courting and mating can be dangerous and often ends in death. Likewise, La petite mort (the little death - orgasm), is an essential element in a Scorpio's sexual nature.

The serpent is a shy solitary creature who lays motionless and will quietly slither away to a less threatening position without being noticed. Yet when a serpent or its nest are in danger, it will deliver deadly defensive bites. A serpent lives in the earth's underworld between the roots of plants, and it's venom, like certain chemicals of plants and fungi, has the power to either heal, poison or provide expanded consciousness. Additionally, the way a serpent sheds its skin and becomes glistening and fresh once again has made the serpent a universal symbol of renewal, rebirth, and regeneration. 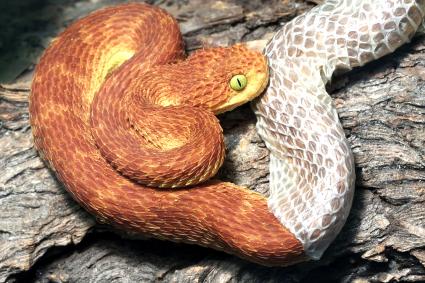 Scorpio is also ruled by the planet, Pluto. Named after the god of the underworld, Pluto is the planet of death and rebirth. The serpent illustrates a Scorpio's fascination with danger, death, the unseen, and the psycho-spiritual as well as with anything that temps them away from a peaceful, simple life. With Pluto as their guide Scorpios are not innocent, they born with a knowing that "What doesn't kill you makes you stronger." Like a serpent, a Scorpio remains calm through tough situations but will strongly react if provoked.

The eagle shares the scorpion's ability to strike at a moment's notice, but where the scorpion lies low to the ground, the eagle soars high above the earth. An eagle has probing and unblinking eyes that sees what others miss. They are known for their ability to see things far away, can "eye" even the smallest objects, and they are swift predators. Eagles have a powerful vision, are fearless, tenacious, mate for life, and nurture their young. 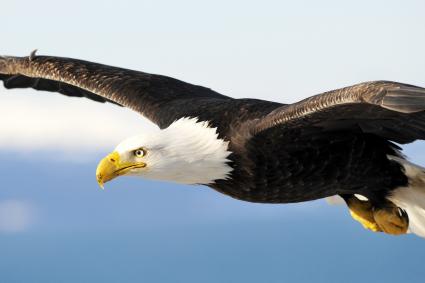 A Scorpio, like an eagle, has powerful vision, can spot the tiniest details, "see" things that are coming down the pike, and has a signature intense and penetrating gaze. They know when someone is lying, based merely on their voice and facial characteristics. A Scorpio can be a formidable enemy, but they also make loyal, trustworthy mates who enjoy nesting and nurturing their children.

The Phoenix is a mystical creature that can rise above the ashes. They are considered wise, intelligent, stable, and mature. It's symbolic of reinvention and renewal in many cultures. Ruled by the planets, Mars and Pluto. Scorpio is driven (Mars) to die, evolve, and be reborn (Pluto). The Phoenix represents the transformational energy that's innate to Scorpio. 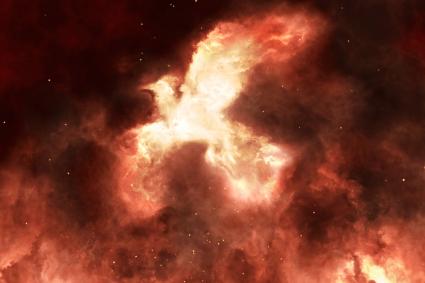 The Phoenix symbolizes a Scorpio's evolutionary journey from the crawling scorpion to the quiet, shy snake to the soaring eagle. A Scorpio cannot run from the destruction of fire of their emotional intensity and often choose very challenging and painful life circumstances in order to purge what is unhealthy or destructive in their personality, then out of the destruction and chaos, Scorpios, like the Phoenix, rise from the ashes to soar triumphantly.

1
Comments
© 2006-2020 LoveToKnow, Corp., except where otherwise noted. All Rights Reserved.
Resources, Advice & Tips for Covid-19
Read More
Scorpio Symbols and What They Represent