The physical characteristics of Aries are often quite obvious, perhaps because this sign is the first of the zodiac wheel. But take note, these will hold true if an individual has a strong presence of Aries in their birth chart, and an Aries appearance can also be produced by a prominent Moon in Aries or if Aries is the rising sign.

The Physical Characteristics of Aries

Aries Sun sign individuals come in all shapes, colors, and sizes, so when trying to spot the distinguishing physical characteristics of Aries, you should begin with the body part that Aries rules. Aries rules the head.

An Aries' head is usually quite prominent, either because the Aries walks with their head slightly forward or because the structure of the face is finely formed and distinctive. Sometimes, it's a combination of both. Headaches and migraines are also common for an Aries.

The hair on the head is usually quite thick; many Aries men tend to keep all or most of their hair well into advanced age. Additionally, their hair can be dark or light, but it almost always has a slight reddish cast to it that's particularly evident when they're in the sun.

Another distinctive Arian trait is the eyebrows. A Males Aries' eyebrows tend to be quite thick, while the females typically enjoy a more arched eyebrow. An Aries' eyes are usually sharp, alert, and often almond shaped. Eye strain can be common.

An Aries' nose is typically distinctive and even occasionally large or prominent on the face. If you ask an Aries, the odds are extremely good that the nose has actually been broken a time or two.

Aries' lips are typically quite sensual and either their top or the bottom lip will stick out. However, the top lip will be well-curved and is usually thinner in appearance.

An Aries' face tends to flush. Aries men and women typically flush red when they feel:

Aries tends to enjoy very robust health; the physical body of Aries is very strong, even muscular, and they have incredible recuperative powers. However, they can suffer from fevers, skin rashes, and insect bites. In fact, most Aries have very sensitive skin, so they should be very careful to avoid harsh chemicals while keeping a close eye on allergic reactions to both food and products. 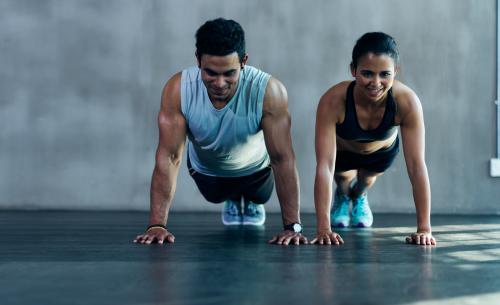 Additionally, an Aries is often accident prone and needs to be wary of:

These are usually caused by Aries moving too fast and not paying attention to their surroundings. If you're an Aries, or love one, you've probably already noticed that they suffer from an inordinate amount of accidents and close health calls.

An Aries Women and an Aries Men

Aries women and Aries men are more physically similar than they are different. They have the same general physical characteristics, but they are more feminine and refined in an Aries woman.

You're More Than Your Aries Sun

Most astrologers will tell you that your Rising sign is much more representative of your physical appearance and your health than your Sun sign. The Rising sign often describes two-thirds, while your Sun sign describes approximately one-third. Of course, if you have 3 or 4 out of the 5 personal planets (the Moon through Mars) in another astrological sign, you'll partially take its physical characteristics. Defining physical characteristics using the Sun sign only can be a bit tricky and misleading.