The meaning of each tarot card is open to interpretation depending on which deck you use and the feeling you get from each card as you progress through a reading. However, many tarot decks are based on the Latin Tarot, also called the Tarot de Marseilles, such as the Rider-Waite-Smith deck, and they have specific meanings based on the card's symbolism, suit, numerology, and position in a spread.

Major arcana cards are similar to trump cards in other games. Instead of being organized by suits, there are 22 cards filled with the deep symbolism of archetypes. When a major arcana card appears in a reading, it is of special significance and may indicate something major in the life of the querent.

The Fool is the zero card of the tarot, and all the following cards in the deck represent the Fool's journey through from innocence through awareness to enlightenment. 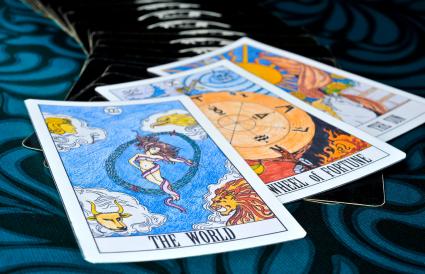 The Magician is a multi-talented creator who has the power to put that talent to good use.

The High Priestess represents the feminine psyche, wisdom, and intuition. When reserved, the Priestess may symbolize talents or skills going to waste.

The Empress represents the entire life cycle, from fertility and birth through death and the life beyond. She is often recognized as the wise woman. When reversed, the card could signal infertility or the lack of fully looking out for yourself.

The Emperor is a symbol of masculine authority and worldliness.

The Pope (The Hierophant) (V):

Also called the Pope, the Hierophant represents a need for ordered spirituality.

The Lovers can signal some sort of romantic alignment and, sometimes, a coming change in your romantic situation. When reversed, this may imply the end of a current relationship or a failure to adjust to challenges.

The Chariot often signals a struggle that lies ahead and the need to persevere through it. Alternatively, it could also signal an upcoming journey. When reversed, the card can signal a failure or inability to conquer your fears.

Strength signals the need to draw on your own inner strength and compassion. When reversed, this card may reveal not being true to your values or abusing your authority.

The Hermit expresses a need for solitude and reflection. When reversed, this card may reveal feelings of alienation and suspicion.

Wheel of Fortune is a symbol of changing fate and a need to take action to ensure your destiny.

Justice expresses balance in all things. Think of it in connection with cosmic karma. The energy you put into the world will come back to you. When reversed, this card can signal impending legal problems and general unfairness.

The Hanged Man signals a need to sacrifice in order to achieve what you want. It also encourages you to re-evaluate your current situation. When reversed, the card may signal a refusal to accept reality.

Despite its obvious interpretation, Death signals a life altering change that you may have no control over. When reversed, this card suggests you are fighting change that is inevitable.

Temperance represents moderation, self-control, and living in balanced harmony. When reversed, this card may suggest you're unbalanced and stuck living in the past.

The Devil has several meanings.

The Tower is a harbinger of unexpected, and sometimes cataclysmic, change. This card holds the same meaning no matter how it is positioned.

The Star signals rejuvenation and opportunity. It speaks to the connection between heaven and earth. When reversed, it can be a sign of disappointment and unfulfilled dreams.

The Moon warns you not to fall prey to deceptions. When reversed, it can be a sign that you are using bad judgment and repressing your intuition.

The Sun signifies general satisfaction with all aspects of life. It may hint at an upcoming trip. When reversed, it can be a sign of unhappiness in any given arena.

Judgement suggests it's time to take stock of your life and reassess your future path. When reversed, it can be a sign of stagnation and unwillingness to face the facts.

The World represents the completion of a cycle. It shows the fruit of all your efforts. When reversed, it may reveal an inability to follow through.

The Minor Arcana is comprised of four suits. Each suit has a generalized meaning based on the four classical elements, while each number and court card of the suit can be interpreted through the use of numerology. 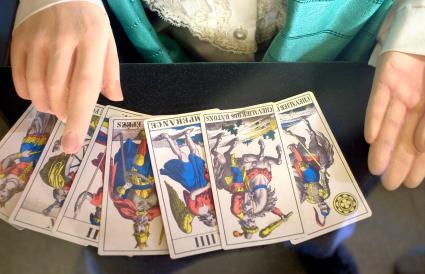 Swords represent the element of air. Cards in this suit denote agitation and action. This suit also suggests a struggle or fight against something.

Cups represent the element of water, which is all about emotions. When cups appears in a reading, it suggests something about the querent's emotional life or predicts emotional changes. It may also be about relationships.

Wands represent the element of fire, which is about passion and creativity. They may also represent intuition and spiritual development.

Pentacles represent the earth element, which is about practical, earthy matters such as career, money, and health.

The numbers and court cards (Page through King) of each suit follow basic numerology and may have the following meanings:

Position of Each Card in a Spread

When interpreting tarot cards, you also need to consider where they appear in the spread and what the intention for that card is for the particular spread you use. No card stands alone, but always fits within the context of its surrounding cards, the question or intention for the reading, and the way the cards are laid out in a spread. 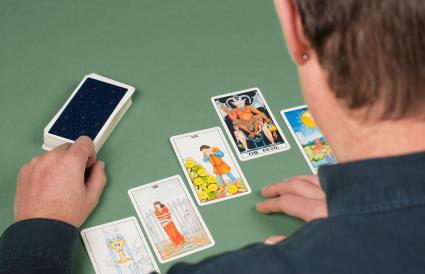 Relationship Between Tarot Cards and Questions

Tarot cards are designed to unlock your unconscious mind so you can discover the best way to proceed in a particular situation. The image on each card will hold a special significance for you and relate to your question in a very distinctive way.

In order to learn the most from your reading, be sure to let this process play out. Don't try to conform the cards to the official meaning. Instead, combine your own intuitive nature with the general meaning of the card, apply it to your question, and see for yourself if you can come up with a novel interpretation of both the card and your particular dilemma.