Astrology, as practiced today, is deeper, more refined, and more diverse than it was in years past. What once was considered fortune telling has become a nuanced tool for spiritual and psychological growth. There are many astrologers who led the way by finding deeper and more significant meaning in the ancient astrological symbolism.

The top ten famous astrologers listed below (in alphabetical order) are legendary. They are astrology's living superstars, the innovative thinkers, "wise elders," practitioners, and teachers who elevated the image of astrology and pioneered the way for today's younger rising astrological stars.

Stephen Arroyo is considered one of the world's leading astrologers. Influenced by the great early 20th-century astrologer Dane Rudyhar, Arroyo's take on astrology is psychological and humanistic.

Michael Erlewine is an American musician, photographer, TV host, internet entrepreneur, and internationally known astrologer with over 40 years of experience as an author, teacher, and counselor. He has won a number of awards including the prestigious UAC Regulus Award.

It's likely everyone who has studied Western astrology in the last 25 plus years has been inspired by Steven Forrest's work.

In 1984, Steven published The Inner Sky. This truly outstanding and poetic book put Seven in the spotlight and won him the 1985 Professional Astrologers Incorporated award for "Outstanding Contribution to the Art and Science of Astrology."

The Inner Sky covered all the basics. For many students, novice astrologers, and even professionals, it was their first introduction to the world of archetypal astrology, synthesis, and astrological storytelling. Now an astrology classic, this astrological primer was the first of many books written by Steven in his trademark wise and poetic style.

Demetra George has been a professional astrologer since 1971. With mythology as her background, Demetra was able to create a unique synthesis of archetypal astrology and ancient techniques.

Her seminal 1986 work, Asteroid Goddesses: The Mythology, Psychology, and Astrology of the Re-Emerging Feminine, co-authored with Douglas Bloch, quickly became the definitive work on the asteroids Ceres, Pallas, Juno, and Vesta.

Jeffrey Wolf Green lectured on evolutionary astrology from 1977 until 2001. Though he was not the first to write about evolutionary astrology, his 1984 book, Pluto, The Evolutionary Journey of the Soul, took the astrological community by storm. It stretched astrologers' understanding of Pluto's influence in a horoscope, was translated into many languages, and has now become one of the best-selling astrology books of all-time.

Now retired, Jeffery Wolf Green's pioneering insights on human growth, reincarnation, and the question of human existence profoundly affected the astrology world. It was the first time in astrological history a particular paradigm and methodology allowed for an understanding of the "why" behind everything, as well as the necessity and desire for the soul's evolution from life to life.

Robert Hand is a historian, computer software writer, author, lecturer, professor, philosopher, translator, scholar, and an icon of the astrological community. He's been a student of astrology since the early 60s and a professional astrologer since 1972. His published works are the "go to" reference books for astrologers, and most consider Planets In Transit as the definitive book on transiting planets.

Dennis Harness is a professional astrologer who has studied both Eastern and Western astrology for over 25 years and is a pioneer in the resurgence and dissemination of Indian astrology in the west.

Lee Lehman has been an astrologer for almost four decades and is the driving force that pushed traditional and classical astrology forward into the 21st Century. Lee was the recipient of the 1995 Marc Edmund Jones Award that honors innovative excellence that benefits all astrologers and in 2008, she was awarded UAC's Regulus Award for Education.

Ray Merriman has been an astrologer since 1967. He holds a Bachelor of Science in psychology, with post-graduate work in clinical psychology. He began his career as a counseling astrologer before segueing into financial astrology.

Astrology in the 21st Century

Just as the aging superstars and other older astrologers were wondering aloud when, if ever, a new generation of astrologer would make themselves known, a first of its kind astrological conference was held in 2007.

The Blast Astrology Conference, held in Sedona, Arizona, was organized by a young entrepreneurial astrologer, Moses Siregar. This coming together facilitated the interdisciplinary and intergenerational cross-pollination upon which the future of astrology depended and put the new generation on stage alongside those who had been wondering where they were.

This magical event was the direct result of The Association of Young Astrologers, whose stated goal was and is "to build bridges across generational divides, to connect younger astrologers with the astrological community and to advocate for them within it."

Meet five of astrology's rising stars, all of whom are in the forefront of astrology's current revival. Their expertise ranges from the traditional and mundane to the spiritual and evolutionary. 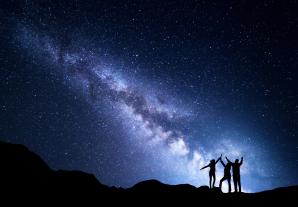 Chris Brennan specializes in the Greco-Roman tradition of astrology known as Hellenistic astrology. In addition to his private practice, Chris lectures, teaches, and is also the author of Hellenistic Astrology: The Study of Fate and Fortune. While all of astrology's rising stars are active online, Chris is one of the most active. He hosts several websites devoted to his astrological interests. Among these is The Astrology Podcast, a free weekly show that features discussions on technical, historical, and philosophical topics related to astrology.

Gary Caton is an eclectic astrologer, lecturer, and teacher who combines elements of traditional/visual techniques, classical horoscopy, and modern astrology. He is one of a new breed of shamanic astrologers that have sparked a revival in an experiential approach that relies on direct observation of the night sky and it's natural cyclic nature.

Austin Coppock is an astrologer, lecturer, and teacher who is known for his ability to reconcile modern techniques with traditional. Austin is also the current president of the Association for Young Astrologers and the author of 36 Faces, The History, Astrology, and Magic of the Decans. This book is an in-depth study of something that's often overlooked by astrologers.

Maurice Fernandez is a leading evolutionary counselor, lecturer, and teacher, who directs a professional certification program for astrologers. He is the author of two books: Neptune, the 12th House and Pisces and Astrology and the Evolution of Consciousness.

Mark Jones, psychosynthesis therapist, hypnotherapist, and evolutionary astrologer, is a graduate of Jeffrey Green's School of Evolutionary Astrology. His work is spiritual and soul-centered. Mark is the author of The Soul Speaks: The Therapeutic Potential of Astrology.

With the advent of the internet, more and more people have become interested in having their charts done, and more and more astrologers have hung out their shingles. There's always space for competent and dedicated practitioners. Unfortunately, online, the good have been joined by the bad and the ugly, and the most beautiful enticing website can mask an incompetent astrologer. How is the consumer to know the difference? Luckily you can connect with some of the best astrologers by visiting findanastrologer.com. This website, along with Astrology University, are the work of Astrologer Tony Howard, another rising star in the astrological community.