In general, humorous Scorpio characteristics are not amongst the traits for which this zodiac sign is noted. The dark, brooding and unflaggingly loyal Scorpio is often stereotyped into more of a poetic literary figure than the playful type. However, every sign within the zodiac has the potential to exhibit qualities that are fun and lighthearted. Scorpio is certainly no different, and the energy manifested within this sign of the zodiac can often be used to channel some very humorous Scorpio traits.

Humorous Traits of the Scorpio

It's not easy to find traits that are particularly funny when you consider the energies that comprise Scorpio's unique persona. Loyalty isn't exactly comical, and jealousy is hardly a knee-slapper. However, humor comes in many forms.

Scorpio humor tends to drift outside of the mainstream, so the best way to understand and appreciate a Scorpio's sense of humor is to listen to the comic routines of these two famous Scorpio comedians.

Kathy Griffin, a Scorpio born November 4, 1960, is an Emmy winning comedian who is known for her observational humor and controversial statements on celebrities, religion, and sexuality. Kathy is indeed the queen of Scorpio prickly barbs.

Jonathan Winters, a Scorpio born November 11, 1925, is an award-winning comedian who had a gentle gift for mimicry and impersonations. His most memorable character was cranky granny "Maude Frickert." Jonathan Winters was the king of acerbic wit.

An Acerbic Sense of Humor

Although Scorpios are born hesitant to take center stage and would prefer to leave the louder, more slap-stick forms of humor to other zodiac personalities, how humorous they are, depends a lot on the environment in which they were raised. 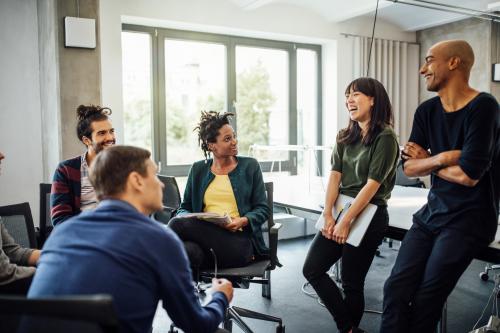 Because humor is merely an expression of a person's energy and intellect, no astrological energy or essence can fully guarantee a humorous individual.

Scorpios are introspective and are not generally regarded as the life of the party. Instead, they often sit back and observe their environment, scrutinize the behavior of others, and look for quality companionship. Like most Water signs, Scorpio is a romantic who is prone to melancholy. When they do find an adequate companion, this person becomes their consummate focus in life. Some Scorpios can transfer their intensity from people into projects, and this causes them to excel in the workplace or in any other fields of interest, including comedy.

The deficiencies of Scorpios usually fall along the lines of jealousy, obstinacy, obsession, and even cruelty or manipulation - none of which are particularly amusing traits. Why are such behaviors common to Scorpios? The energies operating within the sign of Scorpio are both horizontal and downward.

When you match the emotional energies of Water with the deep and probing nature of the Fixed modality, you create a psychological pattern that is intense, passionate and very introspective. Combine such behaviors with certain environmental factors, and the result may be a wise and good-natured individual who is highly observant. Alternately, the more negative version may arise and produce a person who is prone to heavy fits of brooding as well as a silent and obsessive nature.

It's important to remember that there are no full Scorpios. Sun sign Scorpios will always have more than just Scorpio in their natal chart. However, if you're looking for a sense of humor in an astrological birth chart you'd be looking for a well-placed trickster Mercury in aspect to jolly Jupiter. Of course, if the individual has a Scorpio Sun, their sense of humor will be tinged with Scorpio's penchant for observation. Then the question also arises was the person's sense of humor nurtured. Hence, it can be very confusing to isolate exactly what sort of humorous traits a Scorpio might have.