The four angles are a fundamental principle of astrology. They are the backbone of any horoscope, and the most personal points in a chart. To find the angles of your horoscope, you must know your complete data; the date, location, and the exact time of the birth or event. The four angles are astrology's way of accurately geopositioning you in your life.

The concept of angles is based on divisions of the circle described by the path of the sun and planets across the sky from east to west as seen from the rotating Earth. They are crucial to the understanding of the meaning of the birth chart or event and for accurate forecasting.

The Ascendant and Descendant

The ascendant (Asc) is the sign that was rising over the eastern horizon at the moment and place of birth. It is the most important angle of the horoscope. Directly across from the Asc you'll find the second important angle, the descendant (Dec). The Dec is the sign that's setting in the west at the moment and place of birth. The Asc is sometimes called your rising sign.

The Medium Coeli and Imum Coeli

The two other angles are the Medium Coeli (MC), Latin for "middle of the sky." The MC represents the highest point in the sky. The sign on the MC is directly overhead at the moment and place of birth. The angle opposite the MC is called the Imum Coeli (IC), Latin for the "bottom of the sky." The sign on the IC was on the other side of the Earth at the moment and location of your birth.

The Cross of Matter

Together the for angles make up what astrologer call the "Cross of Matter." This is the cross that's formed in a chart by the intersection of the Asc/Dec and the MC/IC; it's the astrological signs on these four points that enables an astrologer to understand how an individual is likely to deal with their physical world.

The Importance of the Angles

While the sign and degree of each angle are important, the angles also divide the circle of the horoscope into hemispheres and quadrants, which can reveal a lot about an individual. Each of the four quadrants contains three of the astrological houses, completing the frame of the horoscope.

When you draw a line from the Asc to the Dec, the upper half of the circle is the southern hemisphere, and the lower half is the northern hemisphere. 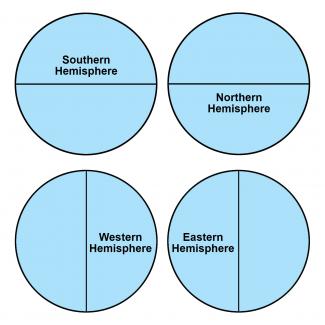 The quadrants are numbered in a clockwise direction. Each is associated with a particular area of focus. 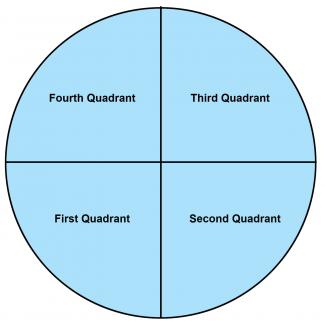 Transits to the Angles Move Your Life Along

The Asc, Dec, MC, and IC are the four cardinal points in the structure of a horoscope. They are where the action happens. Every truly significant happening in your life has involved a transit to one of these four angles. Whether the transit will be jolting, inspiring, depressing or joyful, etc. depends on the actual planet involved and the effect it will have on your life depends on the rest of your chart.

Astrology Is About Time

Professional astrologers always ask the client for their time of birth, and too often they get answers such as: "I was born between 5 and 6 am." "I'm not certain, but it was around 8:30 PM." However every 4 minutes, a new degree of a particular zodiac sign appears on the Asc, and consequently, the opposite degree appears on the Dec. And most likely this will change the degree on the MC and therefore the degree on the IC, as well as many if not all degrees on the house cusps. Yes, having an accurate time of birth is very important in natal astrology and forecasting