The description for the Glastonbury Tarot Deck and companion book reveals the history behind these creations (1999) by Lisa Tenzin-Dolma. The tarot deck was created as a blend of Arthurian legend and the haunting magical mythology of the Isle of Avalon mingled with Christianity and Paganism.

The popularity of the Glastonbury Tarot is attributed to its mystical inspiration of the tarot card design and companion book. The tarot deck design and story follow the traditional tarot sequence and symbolism of the Fool's Journey. Stylized drawings are executed in bold vibrant colors backdropped by the alluring magical landscape of the Isle of Glass. Lee A Bursten's review of the deck imagery and its juxtaposition of Christian and Pagan elements and symbols is a must read for anyone interested in the deck. 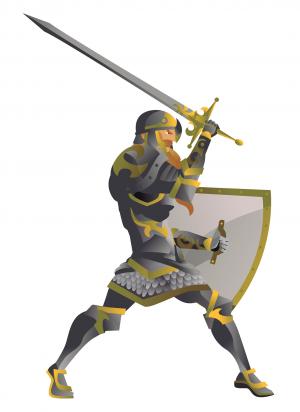 Each card is an individual work of art. All the cards have a decided rhythm to its figures and their surroundings. When you look at the deck, it's easy to see how Lisa Tenzin-Dolma was inspired by the English landscape of Glastonbury mixed with the mystique of legend and myth. The original designs were painted in oil and in brilliant vibrant colors. Her card designs and style have an endearing folkart appeal of two-dimensional perspective. Some mesmerizing points of the cards include:

Glastonbury Tarot and Isle of Avalon

At one time, Glaston was surrounded by water with lake villages. Glastonbury is said to be the birthplace of Excalibur. When Arthur was fatally wounded during the Battle of Camlann, he was taken to Avalon to be healed. At that time, the sword was returned to the Lady of the Laje for safe keeping. Legend also states that Arthur and Guinevere were buried at Glastonbury Abbey.

The Glastonbury Abbey, often proclaimed the oldest above ground Christian church in the world, although a skeletal building of remains is an imposing and powerful presence surrounded by green space. The mythology and facts of the church are blurred with the story Joseph of Arimathea arriving in Glastonbury with the Holy Grail. One story states Joseph commissioned the building of the Abbey so he could hide the Holy Grail given to him by Jesus after the Last Supper. It is symbolic that the chalice is used in place of the cup in the Glastonbury Tarot deck.

You will find a mixed bag among the Major and Minor Arcana. The cards clearly depict a mix of Arthurian legend, Welsh mythology, Pagan and Christian folklore.

The Major Arcana cards in the Glastonbury deck adhere to tradition in the way they are titled. However, they are a mixed bag of imagery from actual places in Glastonbury to scenes from the Arthurian legends and Christian notables. The cards are named for these personalities from antiquity and legend. For example:

Lisa Tenzin-Dolma altered the titles of the Minor Arcana so that the Cups became Chalices and the Pentacles became Vesicae. While the Court cards are easy enough to interpret, and the Pages were changed to Maids, but the meanings were unaltered. The other card design varying in Pagan, Arthurian and Christian references and symbols.

You can use the Glastonbury Tarot deck like any other tarot card spread. To get the full benefit of the creator's intent, you should use the companion book that further explains the symbolism and mythology behind the cards.

The Glastonbury Tarot website offers the most popular card spreads for the Glastonbury tarot deck. These include a one-card, three-card spread, relationship spread, bird spread, and the Celtic cross. Each card has a detailed meaning, and a question is asked at the end for you to ponder. You can make a donation to the creators if desired.

Just like any tarot deck, some people are drawn to the artwork of Glastonbury Tarot Deck while others are put off by its simplicity. Once you delve into the history of the deck and read the descriptions in the companion book, you will quickly know if it is the tarot deck for you.