Gemini is the easiest zodiacal constellation to identify. Symbolized by the twins, its stars form a shape that looks like two stick men holding hands, with its two brightest stars, Castor and Pollux, as the heads of the twins. Both the constellation and the astrological sign of Gemini are all about duality and the legends and myths associated with the constellation highlight that fact.

Locating the Zodiacal Constellation of Gemini

Gemini is one of the brighter constellations in the night sky. It does look like two people, or twins, standing together, and its distinctive shape capped by its two brightest stars, Castor and Pollux, make it easy to spot.

Though the twins get lost in the glare of the sun and can't be seen during the late spring and early summer in the northern hemisphere, or during late autumn and early winter in the southern hemisphere, it lights up the early evening sky from January until May. January and February are the best time for observing the zodiacal constellation of Gemini in both hemispheres. During this time, it's at its highest point at about 10 pm local time no matter where you live around the world.

Where in the Sky to Find the Gemini Constellation

There are two ways astronomers suggest to find constellation Gemini:

Use a Star Map

Of course, if you're not an experienced skywatcher or star-hopper, the very best way to locate Gemini is to get a star map that's set for your specific sky watching location.

The Zodiacal Constellations and the Astrological Zodiac

Twelve of the constellations bear the same names as the astrological signs, but the two are not the same thing.

The early Persian Muslim astrologer, Albumazar, held that the constellation Gemini portended genius, a largeness of mind, goodness, and liberality. The emphasis on an openness of mind is echoed in the astrological sign of Gemini's mutable (ever changing) air (mental) nature, and by its ruler Mercury, the messenger planet that's always on the move. Gemini is the sign of the thinking man who is open to a variety of topics, ideas, and opinions. It's inherently dualistic, curious, mental, and non-emotional.

The fixed stars move about one degree every 70 years. Not all astrologers use them, and some use only a few, but those who do use them find them valuable in adding depth of meaning to their interpretations. 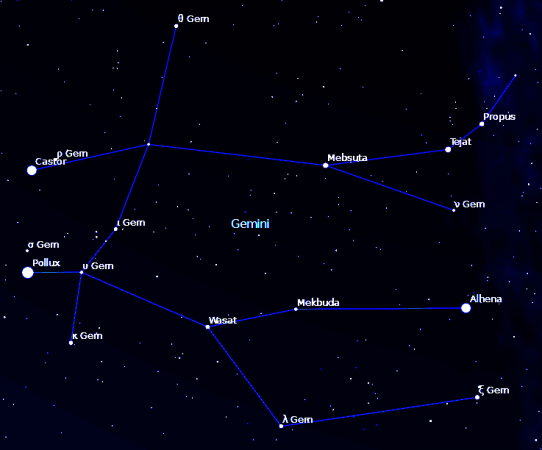 If the sign and degree of a fixed star are conjunct or opposite a planet in a horoscope, notably the Sun, the chart ruler or one of the angles, the influence of that star will be emphasized in an individual's life affairs and personality. All of the constellation Gemini's stars are now located in the astrological sign of Cancer.

The Fixed Stars Castor and Pollux

The constellation Gemini's brightest stars are Castor and Pollux. These stars are now located at about 20 degrees (Castor) and 23 degrees (Pollux) of Cancer.

According to Astrology King:

The zodiacal constellation of Gemini contains 11 named fixed stars. Among them, are:

Geminids meteor shower, named 'Geminids' because it appears to radiate from the constellation Gemini, is a yearly shower that seldom disappoints observers.

If you're sky watching the Geminids from the Northern Hemisphere, you'll start seeing meteors as early as December 6. The meteors start one meteor every hour or so; however, over the next week they reach a peak of 50-80 meteors per hour on the night of December 13/14. The rate then begins to decrease, and the last Geminids are seen on December 18.

Many astrologers believe meteor showers sprinkle the Earth with something new related to the energy of the constellation from which they radiate. In this case, some new ideas will rain down on the Gemini area of every individual's birth chart.

Myths Associated With the Constellation of Gemini

Different cultures have different stories that relate to the constellation Gemini and its two brightest stars. In China, it was associated with Yin and Yang, the dual forces of nature. The twins are mentioned in ancient Persian texts, as well as in Babylonian astronomy. The Romans correlated it with twin brothers named Romulus and Remus. To the Greeks, it was twin brothers named Castor and Pollux.

The Myth of Castor and Pollux

One story says Castor and Pollux, along with their twin sisters Helen and Clytemnestra, were hatched from an egg laid by their mother Leda the Queen of Sparta after Zeus, disguised as a swan, seduced her.

Another story says they had different fathers. Pollux, whose father was Zeus, was immortal, and Castor was mortal because his father was Leda's husband, King Tyndareus. Different fathers or not Castor and Pollux were the closest of brothers; they never left one another's side.

When Castor was killed, Pollux, the immortal of the two, was overcome with grief and begged his father to grant half of his immortality to his brother. Zeus then transformed them into the constellation Gemini, and twins would spend half of their time in heaven, and the other half in the underworld. This explains the twin's disappearance from the sky at certain times during the year.

The Myth of Romulus and Remus

There's some debate about who the father of Romulus and Remus was. Some say it was Hercules. Others say their mother, Rhea, was a Vestel Virgin who was raped by an unknown man and claimed her pregnancy was a divine conception. Another story says Rhea was married to Mars, the Roman god of war, and Romulus and Remus were their twin sons.

In one myth, King Amulius imprisons Rhea and ordered a servant to kill her twin boys. The servant, taking pity on the twins, set them adrift in a basket on the river Tiber, where they were found by the she-wolf, Lupa. Lupa took them as her cubs and suckled them. When they grew larger, Lupa left them where they could be found by a shepherd. The shepherd and his wife adopted the twins, and they grew to adulthood herding sheep.

As adults, Romulus and Remus decided to build a new city, which lead them to quarrel about the location. After consulting an augury, they remained at an impasse and continued to argue. The fighting finally came to an end when Romulus kills Remus and became the founder of Rome.