Why Hindu Astrology Is Predictive Astrology

Hindu astrology is considered a predictive astrology since it can be used to predict stages and events in your life that you'll either accept or refuse. It's through the exertion of free will that you create more karma. It's this cycle that your soul strives to break.

The essentials of predictive Hindu astrology are based on the Vedas (Hindu ancient scriptures) and revolve around the theory of Dashas, planetary cycles that define specific stages of your life. The Dashas are determined by the planets and their cosmic movements as explained in the Vedas.

Your Life in Stages

Using Hindu astrology, your life is broken up into different segments defined by a span of years known as ages or periods. Specific planets are assigned as the rulers of these periods of time or stages in your life.

Your life is defined by ages or periods (Dashas) that are governed by specific planets. In predictive Hindu astrology, the planetary movements in relationship to the Sun and Earth are applied to your birth sign to determine your current cosmic pattern.

In addition to Dashas and their influence, there are other essentials found in predictive Hindu astrology. These contrast dramatically with Western astrology.

No Cusps in Hindu Astrology

There are no cusps in Hindu astrology. In Western astrology, the sun may straddle the imaginary line between two signs. 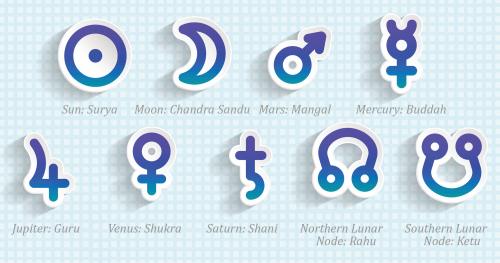 The ascendant sign is the most important sign in your Vedic chart. In Western astrology, the sun sign is most important with the rising sign augmenting it as the individual personality or the face others see.

Birth Yogas Determines Who Your Are

There are 27 birth yogas that define the relationship of planetary placements. These are determined in a birth chart by the distance between the moon and the sun. The yoga determines the person's essence at the time of birth. Each yoga is formed at 13° 20" (13 degrees and 20 minutes) of 360° consecutively, with the first one, Vishkumbha Yoga (00° to 13°20").

In Hindu astrology, the South Node is called Ketu and the North Node is known as Rahu. The North Node is your karmic goal in this life. The South Node is the residual from your past life that often translates into a deep desire during this life. A Vedic astrologer can help you see how you might fall into the comfortable patterns of behavior from previous lifetimes and advise you how to avoid negative ones.

There are four basic vital accomplishments you're destined to fulfill this lifetime, and they are addressed in your Hindu astrological chart. These four life purpose goals are given as Dharam, Artha, Kama, and Moksha.

Dharma is righteous and morality. It governs houses one, five and nine. The life force (Dharma) challenges you to discover your role in life. Dharma means that you understand what you were born to accomplish and go after it. While this includes career, it's also about everything you do in life that builds you into the whole spiritual person you were intended to be.

Artha is wealth and those things of material value. It governs houses two, six and ten. This basic attainment of wealth isn't just about money; it's also about fulfillment obtained through abundant spiritual, emotional, physical and mental life experiences. Gaining self is the greatest wealth you can achieve.

Kama to Give Back

Kama is desire. It governs houses three, seven and eleven. The Hindu god of love is your ideal in giving love back to the world. To achieve kama, you must become successful in your various relationships.

Moksha is the final liberation. It governs houses four, eight and twelve. Liberation is the goal of Moksha in your chart. It isn't always easy to free yourself of the bonds that desires and base needs create. Your Vedic chart reveals the areas that challenge you the most in discovering freedom from self-imposed bonds.

Jyotish is Sanskrit for lord of light, illumination, or, in the case of Vedic astrology, science of light. It's often used as the name for Vedic astrology. There are five essentials of predictive Hindu astrology, also known as Jyotish, that every Vedic astrologer is expected to embody. 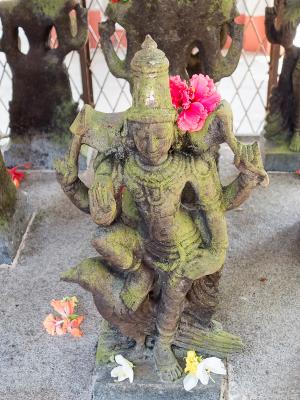 This is a must for any astrologer. Jyotish is considered a science and gives extensive technical information that lays the groundwork for understanding Hindu astrology and interpreting astrological charts. In addition to the basics, an astrologer learns how to perform calculations, recognize Dashas, and perform other necessary tasks such as non-computer calculations and chart drawing.

Practical application of technical knowledge is necessary in order for the astrologer to become proficient and gain experience. The general belief is that by studying the astrology of past events (lives) of notable and famous individuals, the astrologer can learn without the pressure of accuracy, as well as by reading for people the astrologer may know.

Everyone benefits by having a teacher (guru); this is especially true when it comes to learning astrology. Another person's experience and perspective can give you a new way of seeing things. The word guru isn't coincidental since "gu" translates as darkness and "ru" means remove, which is truly the function of a Jyotish Guru.

Vedic astrology is a spiritually based science; even though you learn the methodologies, you must also add your own brand of insight into your readings and interpretations. While the guiding force of the conclusions you draw are scientific, the practical application of those principles will ultimately be intuitive.

Ethical Orientation for Serving Others

The astrologer is charged to always be ethical in practices. The objective is to always be of service to others and ever watchful over the welfare of others. 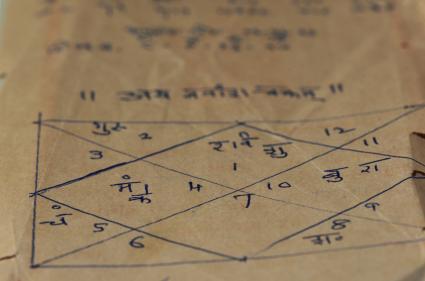 In the tropical zodiac, the 12 zodiac signs are governed by the Sun and how it orbits around the Earth. Other influences include when the Sun crosses over the Equator (the start of Aries), the four seasons and the two solstices of winter and summer.

In predictive Hindu astrology, the calculations used to accommodate the tilting of the Earth's axis means a 23° difference in zodiac signs when compared to Western astrology. This can impact a person's chart by an entire sign.

Some Western astrologers argue that the calculations used to determine zodiac signs are accurate when the correct formulas are used. The waters can become muddied since within both astrology/zodiac systems there many variations open to individual astrologers to use as they prefer.

Clearly there are significant and obvious differences in Western and Hindu astrology systems. One significant difference is how the two systems attribute astrological influences over the individual.

Western astrology addresses planetary influences that affect your personality and drive your choices in life. A western astrology chart is a map of the psychology behind your actions, relationships, career, and other life arenas.

Hindu astrology focuses on how you act and react to life situations. It also assists you in gaining a better understanding of your soul's progression in this lifetime and the lessons you're meant to master through certain obstacles and challenges.

The essentials of Vedic astrology are very different from Western astrology. When you learn Hindu astrology, it's important to understand the various nuances that make it a cohesive predictive tool.