A Taurus man is one of the nicest guys out there and a true pleasure to date. This is a man who's always willing to go that extra mile to treat a lady right. What should a woman expect when she dates a Taurus male? This masculine man is into old-fashioned courting and will do romantic things like flowers, candlelight dinners, soft music, dancing, and walks in the park. He likes a show of feelings, is loyal, is touchy-feely sensual, expresses things deeply, and wants to be in control.

You can expect a Taurus man to show his feelings rather than telling you how he feels. He probably won't start a lengthy discussion related to emotions or even respond to your words of affection, but he will show you how much he loves and cares for you by bringing flowers or a present. On the negative side of things, this man will also show his anger during times when he's not pleased. He can be very stubborn and might refuse to have a detailed conversation about an issue, instead preferring to show that he's upset by shouting or acting annoyed and indifferent.

A Taurus Man in Love Is Loyal

This man is very persistent and loyal. It might take him a while to choose a partner or accept a date, but when he does, you can expect him to give 100 percent. He knows how to pamper his partner, and he will go out of his way to do so. This strong loyalty, devotion, and capacity to care also make Taurus men very good husbands and fathers.

A Taurus man is a romantic at heart and he's not a "player." He doesn't go into any romantic relationship lightly. He's a loyal, thoughtful, affection, and kind man who enjoys monogamy because he doesn't like being single. However, a Taurus man could be considered a serial monogamist because he tends to commit to one person at a time and if the relationship doesn't work out, he will move onto the next until he finds that perfect someone.

While not always verbally passionate or expressive about his feelings, these men go deeper than most think. There are often serious thoughts going on in their heads that they might not express to others, and chances are that not every layer of the man will show up right away in a relationship. It might take time for you to gain his confidence and trust to the level that he's willing to allow himself to share these deep thoughts with you.

A Taurus guy likes to be in control. He wants to know that he's providing for you (even though he may acknowledge that you're perfectly capable of providing for yourself). As a father, he likes to feel as if he's the head of the family and likes to be consulted on all family decisions, whether they directly involve him or not. Be aware that Taurus men also like to handle finances and want to be in control of money-related matters. The good news is that you can usually trust them with that responsibility since Taurus men are practical and are seldom at risk of extravagant overspending.

A Taurus man may be territorial and protective of his partner and is likely to keep up with what they're doing. But a Taurus man is much more possessive and controlling when it comes to his material possessions. However, a Taurus can become jealous and overly possessive of the one they love if they feel they have just cause. So, don't flirt or be overly friendly with other men if you're intimately involved with a Taurus man.

Your Taurus Man Is Sensual

These men know about sensuality. Their earthy nature likes physical pleasure, and they enjoy seeing their partners look nice. Since a Taurus man may never directly ask for what he wants, you could try offering him a massage or a long, deep kiss. Activities that keep you both physically active are also a good bet, so try hiking, relaxing sports, gardening, or just taking a long walk.

Other Things to Remember About Taurus Men

It can be very challenging to date a Taurus, especially when you don't know what to expect and can't read him. However, if you'll keep these key points in mind a Taurus man can be divine.

These men may be stubborn and can definitely have nasty tempers. They don't often get upset, but when they do, it's best to try to calm them down quickly.

A Taurus guy can be shy at first, but he'll open up in time.

He Loves to Eat

Most of these men love good food! A great way to make him date happy is to cook him a fabulous meal.

It's not uncommon for this guy to become jealous, but it probably won't be a malicious sort of jealousy. The Taurus man seeks stability and security, so he simply wants to make sure that he's the one you really adore.

If this man makes you a promise, you can hedge bets he'll keep it. He's reliable, dependable, and trustworthy.

He Wants to Know He's Important to You

The most important thing to keep in mind when dating this man is that he wants to matter to you. If you cater to his practical, warm nature and show him how important he is, you're more likely to have a great relationship. 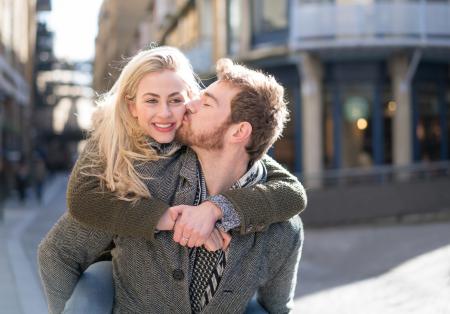 Tips for Dealing with a Taurus Man's Positives and Negatives

It's easy to deal with the positive aspects of a Taurus man: Simply relax, let him run the show, and appreciate the peace, calm, and secure love he provides.

As for the negatives, keep these things in mind:

Taurus men are simply irresistible creatures, but attracting them can be difficult. So, what type of woman is attractive to a Taurus man? A lady who will let him know she's interested and then be patient. One who doesn't swarm him with intensity, but is sweet, gentle, kind, and will show him she's physically interested without making too much of a show. One who will gaze into his eyes, lightly touch his arm when she speaks with him, and let him lead and use gentle persuasion to get her own way will soon find she has him eating out of her hand.