The Virgo constellation is the only woman you'll find in the night sky. She is the "Queen of Heaven." She's one of the 13 constellations that the Earth's ecliptic passes through, and one of the 12 constellations that bears the same name as a sign of the astrological zodiac. Her stars are said to form a maiden holding sheaves of grain her hand. From ancient times, she has been associated with virginity, purity, fertility, and agriculture.

Virgo is the second largest constellation in the sky; the only one larger is the Hydra constellation. She spans over 50 degrees in the astrological zodiac, in the signs Virgo, Libra, and Scorpio, and is located between constellation Leo and constellation Libra.

The easiest way to locate Virgo is to find her brightest star, Spica. Use the Big Dipper as your guide and just follow the curve of the handle down until you find the bright star Arcturus in the Bootes constellation. Then, continue the arc to the next bright star, which is Spica.

The "Diamond of Virgo" connects Spica with three other stars and as the name implies, these four stars form a diamond in the night sky.

The three other stars are:

Finding the diamond in the night sky can also help you locate Virgo.

Of course, it's always easier to pinpoint a constellation if you have a night sky star map set for your location:

In ancient times, all who studied the sky were both astrologers and astronomers. Two thousand years ago, the astrological zodiac lined up in the sky with the constellation zodiac but due to the Precessions of the Equinoxes, they began slowly drifting apart, as did astrology and astronomy. 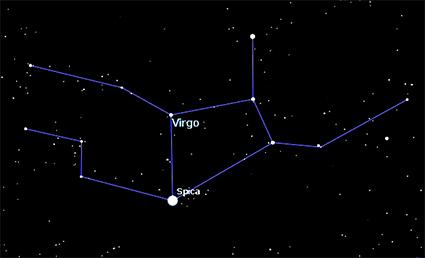 Since ancient times, Virgo has been considered the most divine and virtuous of constellations and her fixed stars, if not adversely aspected in a horoscope, echo her benevolence. Spica is Virgo's brightest star; in astrology, Spica is considered one of the most beneficial of fixed stars.

Spica, which marks the sheaves of grain held by the Virgin maiden comes from the spīca virginis, which is Latin for "Virgo's ear of grain." Spica looks like one star, but it's actually two that are dancing tightly together.

Interestingly when first defined by astrologer/astronomer Ptolemy, he classified Spica as a Venus/Mars type of star, a combination of both sexes. Spica is also called "The Lonely One" because of its distance from other stars. This says something about the androgynous and self-contained nature that is often noted with those who have the astrological sign of Virgo prominent in their natal chart.

Spica was one of the 15 Behenian fixed stars that were used for magical applications in medieval astrology.

Spica, at her best, brings success, riches, love for the arts and science, erudition, and precision, all characteristic of the astrological sign of Virgo.

There are two meteor showers that radiate from the Virgo constellation:

Astrologers speculate meteor showers sprinkle the Earth with something new related to the energy of the constellation from which they radiate. In this case, something new will rain down on the Virgo area of every individual's birth chart.

The sky always held great mysteries for the ancients, and their way of explaining the universe was through colorful stories and legends. Most of the goddesses who are linked to Virgo were considered fertility goddesses, or goddesses of the harvest, and all of them are related to maidens and purity. 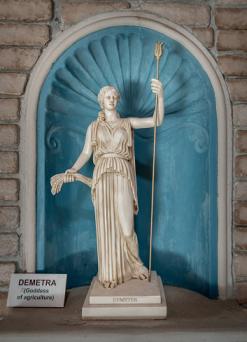 Down through the centuries, the Virgo constellation has been associated with the Greek goddess of agriculture, Demeter, and Astraea, known as the "Star Maidens." Astraea was the last immortal to live with humans. The story goes that Astraea abandoned the Earth because of humanities' wickedness and took her place among the stars as the Virgo constellation.

Virgo is also linked to Dike, the Greek goddess of justice, and to Demeter's daughter, Persephone, the goddess of Spring.

In Egypt Virgo was connected to the goddess Isis. Isis is the Egyptian goddess of the Harvest that the monster Typhon relentlessly chased until she dropped her sheaves of grain, and all the grains scattered about to become the fainter stars in the Milky Way.

Spica, the brightest star in Virgo, was also important in ancient Egypt. Altars were built to worship the star that was called the "Star of Prosperity."

In Other Ancient Civilizations

In India, she is the great god, Krishna, in Babylonia, she was the goddess Ishtar, wife of Tammuz, the god of the harvest, and in Ancient Rome Virgo was related to the Vestal Virgins.

In the Middle Ages, Virgo was linked with the Holy Virgin Mary.

The Myth of Demeter and Persephone

The most well known Virgo myth goes something like this: Persephone, the Greek goddess of Spring, was picking flowers when suddenly Hades, the god of the underworld, burst out of the ground, grabbed her and started dragging her down to the underworld. Persephone screamed for help and her mother, Demeter, was terrified when she heard her daughter cry out. She went on a frantic search, but Persephone was nowhere to be found.

Demeter finally discovered what happened to Persephone and vowed to her brother Zeus that she wouldn't let anything grow on Earth until she got her daughter back. The Earth grew barren, and the people were starving. Upon seeing this, Zeus grew concerned and sent the messenger god, Hermes, to the underworld with a message to let Persephone go.

Hades agreed but knew if Persephone ate something, she couldn't leave the underworld. So, before she could go he secretly slipped some pomegranate seeds into her mouth. Upon finding this out Demeter was furious, so Zeus sent his mother, Rhea to try to mediate an agreement between Hades and Demeter. Demeter reluctantly agreed Persephone could spend part of the year with Hades but when her daughter was in the underworld, nothing on Earth would grow.

Of course, the myth of Demeter and Persephone is much more detailed than this. It's the story the ancient Greeks told to explain the changing of the seasons.

In the northern hemisphere, the astrological Sun entering the sign of Virgo marks the fall equinox. This is the time of harvest when the Earth begins to grow ever more barren and when Persephone enters the underworld. The flowers won't bloom again until the spring equinox when Persephone returns and the sun enters Aries.

In esoteric astrology, Virgo is the astrological sign of the disciple and humble servant, as well as the sign purity, innocence, and self-sacrifice. Virgo is about perfecting, crafting, polishing, and continual renewal. It's the astrological sign that represents the art of sacred devotion, service, healing, and establishing the "kingdom of heaven" on Earth. The energy of the sign of Virgo opens the doors to finding self-sufficiency and the kind of service/facilitation one person can offer another.