Scorpius, the southernmost constellation, is a magnificent showpiece on a dark, starry night. This "J" shaped group of stars looks a bit like a Scorpion, minus its claws, with its fish hook shaped Scorpion's stinger dipping into the Milky Way's stream of stars. Scorpius was one of the 48 classical constellations listed by astrologer/astronomer Ptolemy in 150 AD and is the constellation that defines Scorpio, the 8th sign of the zodiac.

Scorpius is the most striking of the summer constellations. Its brightest star, Antares, lies at the "Heart of the Scorpion," and you can easily see Antares with the naked eye on a dark, moonless night. It's interesting to note in the video below that while Scorpions have two large claws in front, Scorpius does not. The story goes that the claws were cut off in ancient times to form constellation Libra.

When and Where It's Best to Spot Scorpio

Look to the Horizon

As seen from mid-northern latitudes, Scorpius never climbs high in the sky but can be seen along the horizon. This means you'll need an unobstructed view southward. It also means the further north you are when viewing Scorpius, the less of Scorpius you'll be able to see. However, its brightest star, Antares, can still be seen as far north as Southern Alaska.

There are star maps that can help you find Scorpius from your sky watching location, three of the best are:

Initially, the constellations of Scorpius and Virgo were connected. It's said the Romans created Libra and the two brightest stars in the Libra constellation, Zubenelgenubi and Zubeneschamali, were once the Scorpion's claws.

However as early as 2000 BCE, the Babylonians associated the constellation of Libra with the judgment of the living and the dead, and Libra's scales with weighing the souls of the dead. It seems it was the ancient Greeks that merged the stars of Libra into Scorpio. The constellation Libra was then reinvented by the ancient star gazers of Rome, and Scorpius once again lost its claws.

Current Boundaries of the Scorpio Constellation

Scorpius's current boundaries were defined by The International Astronomical Union (IAU) in 1930.

Symbolism of the Scorpion

There is a resemblance of a tail much like that of a Scorpion in Scorpius and adding the Claws of Libra makes the grouping of these two constellations look very much like a Scorpion. Many astrologers believe it's the group of the stars of both constellations that may have influenced the choice of its Scorpion symbolism. When you think of Libra as the claws, it certainly adds a new depth of meaning to what is often considered the nicest sign of the astrological zodiac.

This merging and transforming of Scorpius's boundaries over the centuries echo the merging, death, and rebirth aspects of the astrological sign of Scorpio.

In the ancient past, the astrological signs lined up with the constellations but due to the precession of the equinoxes and to all the above redrawing of Scorpius's boundaries, that's no longer true. The Earth's sun spends less time passing in front of Scorpius than any other constellation.

Constellation Scorpius is a human construct that, with a couple of changes, dates back to ancient times; it is a pattern of stars which exists on the celestial sphere that has Earth at its center. The Earth's Sun passes in front of Scorpius from about November 23 through November 29.

Constellations Are Relevant to Astrology

From ancient times, Scorpius has been associated with the apparent death of the Sun in the winter months and the return to a primordial state of suffering and torment. Scorpius contains 15 named fixed stars that are relevant to astrology, and all are flavored with both the pains and pleasures of human experience. The most notable stars of Scorpius, in the order of magnitude, are Antares, Graffias, Isidis, Lesath, and Acumen and Aculeus, the Messier star clusters. 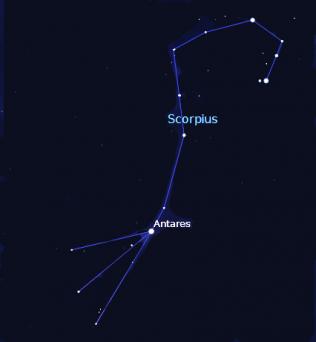 Antares is a red fire start that is called "the scorpion's heart." Antares denotes success, good fortune, and indicates the potential for great power, but if the power is used without integrity or wisdom, it means the threat of ruin, and a person who can be destructive to himself by his own obstinacy.

Graffias or Acrab is located in the head of the scorpion. Like Antares, it can denote great honor but when its benefits are abused and corrupted, it leads to danger and violence. Astrologers Ebertin and Hoffman credit it with the ability to do research, especially into things that are hidden and unknown.

Isidis or Dschubba, located in the sting of the scorpion, portends all the destructive qualities of Antares and Graffias, but few of the benefits. It indicates a cunning mind with organization abilities, but is also associated with imprisonment, disgrace, and assaults.

Aculeus, the Butterfly Cluster or Messier 6, and Acumen, the Ptolemy Cluster or Messier 7, are twin nebulas in the sting of the Scorpion. These two stars clusters have a reputation for causing blindness, either physical, emotional, or psychological.

However, it's interesting to note the process of metamorphosis from caterpillar to chrysalis and finally to butterfly echo the personal transformation process that the astrological sign of Scorpio represents. Acumen is defined in Merriam-Webster as "keenness and depth of perception, discernment, or discrimination, especially in practical matters," all which are powerful traits of Scorpio.

Scorpions have played an important role in mythology since the earliest times, and many Scorpion goddess and gods appear in the myths of ancient cultures.

There are many others, but just those above reveal that there's little doubt the scorpion was an important animal in ancient times and worshipped by many many cultures.

The most well-known Scorpius myth is the Greek myth of Scorpius and Orion. In one version of this myth, Orion was a mortal man and a skilled hunter who often hunted at night with Artemis, the Goddess of the Moon. On the nights Artemis hunted with Orion, she neglected her lunar duties (hence the dark nights of the New Moon). When Orion boasted to the Goddess Artemis that he would kill every animal on earth, Gaia, the Earth Goddess, sent Scorpius to kill Orion.

However, Artemis, who was enchanted by Orion, insisted to Zeus he should be placed in the night sky with his hunting dogs, Canis Major and Canis Minor, at his feet where all could see him and remember his prowess. Of course, this displeased Gaia, who felt the small Scorpion was the mightier hunter for slaying Orion, and she immediately insisted Zeus give the scorpion the same honor.

Zeus agreed to both of their demands but placed Scorpius and Orion on opposite ends of the night sky. Now Orion is said to flee to the west whenever his murderer rises in the east. Just in case Zeus, in his wisdom, placed Sagittarius's arrow pointing directly at Antares, the "Scorpion's Heart."

Like those with Scorpio prominent in their birth charts, the scorpion is an amazing, complex creature that is bent on survival. Scorpions have survived longer than any other of the world's land animals.

Esoterically, Scorpio is the zodiacal principle associated with the magical will. It is the energy of mystics, occultism, and magic. Scorpio's mission is to force truthful expression out of the tension of extremes. This is the sign that bequeaths humankind with the incredible will to survive. It is in Scorpio that the personality must confront and overcome the temptations of worldly desires - sex, greed, power, fear, hatred, ambition, and cruelty. A soul's Scorpio incarnation is an arduous one involving the search for transformation. It's in winning this battle over the dark nature that the world is transformed, and the beautiful side of life is seen.