The Sagittarius constellation is near the deepest part of the Milky Way, where the galactic center lies. As a result, it has an abundance of wondrous deep sky objects. Modern sky-watchers often call Sagittarius "the teapot," however, the ancient Greeks and Romans, who named the constellation Sagittarius, believed it to be a centaur with an arrow aimed at the heart of Scorpius, the scorpion. Throughout history, the image of an archer centaur has been the symbol of this amazingly diverse constellation and the astrological zodiac's sign of Sagittarius.

Sagittarius lies in one of the most amazing neighborhoods you can imagine; the center of the Earth's Milky Way galaxy. It's fairly easy to spot because its brightest stars form a distinctive shape of a Teapot.

Sagittarius has dozens of star clusters, globular clusters, nebulae, and double stars. There's a lot that can be seen with the naked eye but to see all the hidden beauty, you'll need binoculars or telescope. Then, simply find a dark place away from city lights, look up into the sky, and locate the bulge in the starry band of the Milky Way. That's the location of the galactic center, which is within the boundaries of Sagittarius.

For Northern hemisphere observers, Sagittarius can be seen during the summer months of June through August floating just above the southern horizon. Southern Hemisphere observers have the very best view because for them, it's straight overhead.

No matter where you are, you'll have a much easier time finding Sagittarius if you have a star map specific to your location:

In modern astronomy, the sky (celestial sphere) as viewed from Earth is divided into 88 regions of various sizes that are called constellations. The current boundaries of these constellations were formally defined by the International Astronomical Union (IAU) in 1930. Forty-eight of the modern constellations were first recorded by astrologer/astronomer Ptolemy in 105 AD.

The astrological zodiac is based on the changing of the seasons and divides the Earth ecliptic into 12 equal slices of 30 degrees, each of which is fixed related to the solstices and equinoxes.

However, just because they are not the same thing doesn't mean the constellations and their fixed stars are not relevant to astrology. The constellations are humanity's most ancient astrological heritage, and their stories and legends were used to define the signs.

Sagittarius Stars and Much More 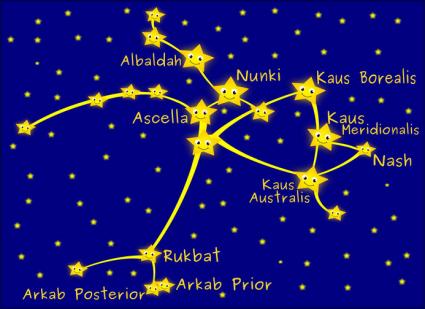 The astrological sign of Sagittarius is associated with Jupiter: the Lord of Plenty, which aptly reflects the grandeur of the constellation that bears the same name.

The constellation of Sagittarius contains:

In addition, it has 32 stars with confirmed planets. Its brightest stars form an asterism known as the teapot. Three of these stars are from the archer's bow: Kaus Borealis, Kaus Medius, and Kaus Australis.

Many astrologers use the fixed stars to give greater depth to their interpretation. The majority of the Sagittarius constellation's fixed stars are now seen in the background of the astrological sign of Capricorn. Listed below are the astrological location of the three stars from the archer's bow and some of what they reveal to astrologers.

Of all the amazing deep sky objects within the Sagittarius constellation, perhaps the most wondrous and astrologically relevant is the galactic center.

The Galactic Center: The Sun of Earth's Sun

The galactic center, a huge black hole about the size of a large star that contains the mass of four million suns, is the point around which the Milky Way turns. It is located on the boundary of the constellations of Sagittarius and Scorpius. Though long suspected, science only confirmed the existence of the black hole on Sept. 5, 2001 in a discovery made by the orbiting Chandra X-ray Observatory.

The galactic center moves at the pace of a fixed star, 1 degree every 72 years. In the astrological zodiac, it's currently on the 27th degree of Sagittarius. What's interesting, unlike the discoveries of Pluto (1930), Neptune (1846), and Uranus (1781), the galactic center is not mentioned in any ancient mythologies that were used by ancient astrologers to give life and character to the astrological signs and planets. So, it's up to modern astrologers to ferret out the story and the meaning of how the galactic center plays out in the story of a life and in the mundane world.

Of course, astronomers and others call it a "black hole," but astrologers see it quite the opposite. They see it as a massive energy zone, which throws out power and light. 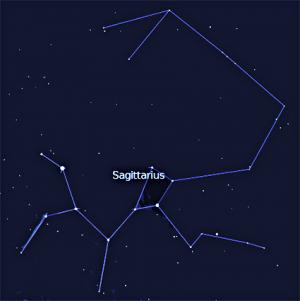 The galactic center has become a new area of exploration and a new concept for astrologers. Their first clue as to what it might mean was that it was located is the astrological sign of Sagittarius, the seeker of truth and freedom and the guardian of the moral high ground. This indicates that whatever the galactic center touches in an individual's chart connects to these primary Sagittarian themes.

As an example, Bob Dillon, the truth-telling Nobel Prize-winning singer, songwriter, and poet has Mercury, the messenger of the gods, at 27 Gemini, opposite the galactic center.

A study done by Astrologer Mandi Lockey looked into the world of "whistleblowers" with placements at 27 degrees Sagittarius. Whistleblowers certainly throw the light of truth on a situation by revealing something you can't un-know. And in their truth-telling, they help awaken the world and set it on a new course.

Mandy Lockey gives many details related to these three examples and many other whistleblowers she researched. She concludes: "That power and theft of information, emerges as a major theme of the astrological GC..." Also interesting is that all the examples of whistleblowers used in the research were also having significant transits to the planets or points in their natal charts that connected to the galactic center at the time of or close to key whistleblowing event dates. 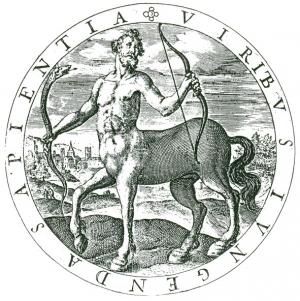 The myths about the constellation Sagittarius are a confusing mix. Sagittarius has been depicted in different forms by various ancient cultures and fantastical tales were woven by what the ancients saw. But what all these tales about Sagittarius have in common is the dual nature of Sagittarius, one animalistic and one human.

In Greek Mythology, Sagittarius was seen as:

All of these myths are echoed in the diverse character of the astrological sign of Sagittarius.

Legend of Orion, Scorpius, and Sagittarius

The constellation Sagittarius is set in the sky facing the constellation Orion and next to Scorpius with its arrow pointing at the star Antares, "the scorpion's heart." In this legend, Orion, the mighty hunter, was killed by the Scorpion. This led Zeus to honor them both by placing them in the sky. However, Zeus was smart enough to separate them by placing the Orion and Scorpius constellations on opposite ends of the night sky. Then for extra assurance, Zeus placed Sagittarius's arrow pointing directly at Scorpius's heart, just in case Scorpius should be tempted to go after Orion again.

The astrological sign of Sagittarius represents everything from hunting, sports, weaponry, the military, and travel, to the law, justice, healing, learning, teaching, theology, and philosophy. The varied myths of Sagittarius, from the "wild man" Enkidu to the kindly healer, teach, mentor Chiron, reveal that the sign of Sagittarius is about humanity's need to overcome animalistic instincts by widening its horizons to attain knowledge, wisdom, and an understanding of the greater truths.