The constellation Pisces is represented as two fishes. Each has a silver ribbon tied to its tail, and the two ribbons are joined with a knot that keeps the two from swimming apart. The Pisces constellation is filled with wondrous nebulas, a stunning spiral galaxy with whirling arms that's called a phantom galaxy, and other heavenly wonders. Its stars were thought to control the fate of seafarers, and it has been associated with Christ. All of this is echoed in the spiritual, mystical, and nebulous character of the astrological sign of Pisces.

Finding the Pisces constellation in the sky is a bit tricky. It occupies a vast piece of the night sky, and the stars are all dim. It forms a large "V" with the right side of the "V" forming a small "O" on the end, and the left side forming a small triangle on the end.

Best Times and Places to Spot the Pisces Constellation

What to Look For

Look for a circular arrangement of five stars with your naked-eyes. This is the Circlet asterism and the most recognizable star pattern in Pisces. If you don't see it, you can try at a darker site, away from urban and suburban light pollution, or you can get a star map that's set for your specific sky watching location.

Pisces and the Constellational and Astrological Zodiacs

Thirteen constellations touch the Earth's ecliptic, and twelve bear the same names, but they are not the same thing.

Manilius the 1st Century astrologer says of constellation Pisces: "The folk engendered by the two Fishes, the last of the signs, will possess a love of the sea: they will entrust their lives to the deep. …"

Manilius also wrote that "the children of this sign are endowed with fertile offspring, a friendly disposition, swiftness of movement, and lives in which everything is ever apt to change."

Pisces is the mutable water sign of the astrological Zodiac and has always been related to the vast and changing nature of the oceans and seas. The fishes knotted together but swimming in two different directions corresponds to the Pisces inclination to be in the Earthly body and the pull to drift elsewhere in search of another reality.

Pisces contains ten stars with known planets and a single Messier object, the spiral phantom galaxy Messier 74. In 2016, NASA discovered a rare galaxy hiding in Pisces. Also within the constellation are two curious shell galaxies, one that is surrounded by more faint shells, and scattered among these shell galaxies are also spiky foreground stars. Large, almost boundless, Pisces holds few fixed stars but many heavenly wonders. 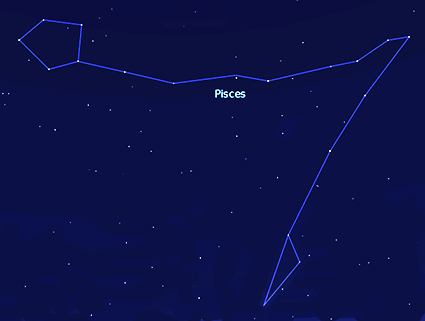 The brightest star in the Pisces constellation is Al Pherg. Al Pherg is a double star in the string near the tail of the northern fish. George Noonan writes in Fixed Stars and Judicial Astrology that this star gives preparedness, steadiness, determination, and final success.

Alpha Piscium (Al Risha) is the double star that marks the knot in the strings that tie the fish together. The Astrology King says this star is the "crux of a thread holding things together in the notoriously nebulous Pisces, and as a kind of lifeline to be thrown those adrift in the Ocean of Time and Space." Those with this star prominent in their horoscopes know where they are, where they're going, and they have a gift for helping others.

Omega Piscium is the first star to the east of the Circlet of Pisces, the head of the western fish.

One of the world's most knowledgeable astrologers, Robert Hand, points out the constellation's first star has been designated Alpha, "even though it is not the brightest star of Pisces. Since the first star of the second fish is 'Omega', Christ's statement, 'I am the Alpha and the Omega', takes on a curious stellar correlation."

Myth and Legends About Constellation Pisces

Greek myths explained it was Typhon, the worst of the Titans, that scattered the gods in every direction. To escape Typhon, Aphrodite (Roman Venus) and her son Eros (Roman Cupid) tied themselves together, jumped into the sea, and immediately turned into a pair of fish.

Syrian mythology tells of a large and mysterious egg appearing on the river. Two fish (Mermen) named Aphros and Bythos brought the egg to shore and helped it hatch. Inside the egg, was Ashtarte. Due to this legend, the ancient Syrians refused to eat fish.

The stars of the Pisces constellation were also an important sacred symbol for the Hebrews and to the early Christians, as well.

Monotheism, Spirituality, Pisces, and the Fishes

For many astrologers, the Age of Pisces began with the birth of Jesus Christ in AD 1 and ends AD 2150. While there is disagreement, the birth of Jesus did mark the beginning of monotheism and the birth of the Christian religion, which is certainly a major turning point for humankind. 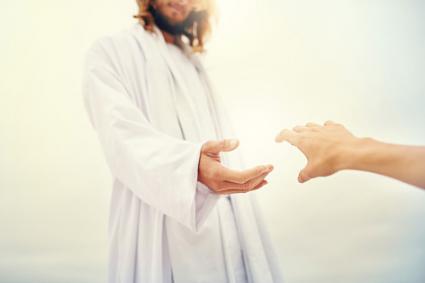 Other Christian Symbolism Associated With the Pisces Constellation

Jesus brought the heavenly concept of universal love into the world when He proclaimed, "A new commandment I give you that you love one another." (John 13:34)

Jesus Christ, as described in the Bible, bears many of the temperaments and personality traits of a Pisces and can be considered a positive Piscean archetype. Jesus tended to be more introverted than extroverted, often preferring solitude over people and close friends over the crowd. He was sensitive, empathetic, patient, loving, kind, egalitarian, and tolerant. He had unusual perceptive powers, was responsive to the needs of others, and felt deeply hurt when he sensed the inhumanity of others.

The Pisces constellation is a sprawling and indistinct constellation that suits the Pisces astrological nature. The astrological sign of Pisces is the universal sign of love and acceptance. It's the sign of dreams, schemes, and magical things. It's diffuse, ethereal, all-encompassing, and hard to pin down. It represents the compassionate heart of humankind, the search for bliss, and the belief in something mystical and bigger than the self that directs and connects all of life.